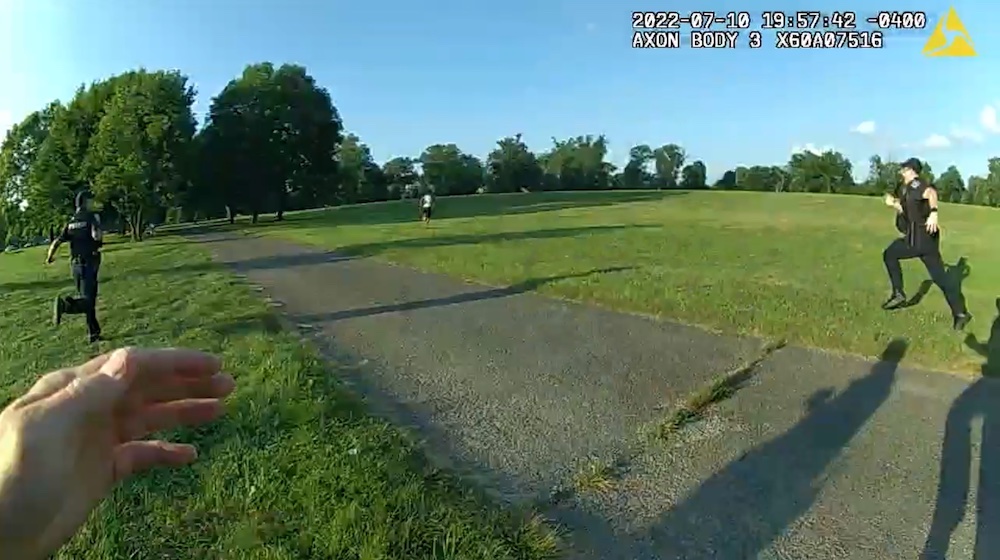 Louisville’s new inspector general’s office will conduct an independent investigation of the high profile July 10 incident that saw multiple Louisville police officers open fire on a suspect after trying to serve outstanding warrants on the man following the conclusion of a well-attended basketball tournament at Shawnee Park.

The investigation was approved by a unanimous 8-0 vote by the Civilian Review and Accountability Board on Wednesday afternoon.

Louisville Metro Police Department officers approached Herbert Lee, who had multiple warrants out, following the conclusion of the Dirt Bowl basketball tournament in the West End’s Shawnee Park on July 10. The 30-year-old Black man fled when he saw officers approaching him, leading to a foot chase. LMPD said Lee opened fire on officers, striking one in his bullet-resistant vest. In return, at least four officers opened fire, shooting dozens of bullets at Lee, who was injured in the incident. Lee is charged with attempted murder of a police officer, wanton endangerment of a police officer, convicted felon in possession of a handgun and fleeing police.

LMPD faced criticism for attempting to execute a warrant in such a busy, public place, leading to a shootout that could have injured or killed bystanders. The department also faced scrutiny for declaring that it would investigate the shooting on its own, breaking with a policy change made following the 2020 police killing of Breonna Taylor whereby the Kentucky State Police would investigate shootings by LMPD officers. (LMPD said that Kentucky State Police were facing a backlog of investigations, including the resource-draining investigation of a shooting that killed three officers in Floyd County in late June).

After recommending that the Civilian Review and Accountability Board approve the investigation, Inspector General Edward Harness mentioned that the incident was currently only being investigated by LMPD.

“There’s also the aspect that the criminal investigation is being conducted by LMPD and not by a multi-jurisdictional task force or Kentucky State Police,” he said.

He added that before issuing findings, his office would check with authorities that could issue criminal charges to make sure that they were not compromising any other investigation (like LMPD’s).

The Office of the Inspector General began taking in civilian complaints of LMPD misconduct and conducting preliminary investigations in June. Approved by the Civilian Review and Accountability Board, the Shawnee Park shooting investigation is the first case that will see a full investigation by the inspector general’s office.

In presenting potential investigations to the board, the inspector general’s office does not disclose the names of officers involved or the complaining party. However, the date and the circumstances of the incident Harness described matched the July 10 Shawnee Park shooting — and when asked by a board member if he was referring to the Shawnee Park shooting, Harness said he was.

At their monthly meeting on Wednesday, the Civilian Review and Accountability Board also heard from staff members of the inspector general’s office who spoke about their experiences spending at least 40 hours doing ride alongs with LMPD officers as part of their training.

The three staffers who spoke described officers they interacted with as largely living outside of Louisville proper and unaware of the inspector general office’s mission.

Ambra Hunter, the administrative coordinator with the Office of the Inspector General, said during a roll call in the 4th Division, one LMPD officer stormed out of the room saying they would not stay in the same room as her.

“If they can’t be respectful to somebody coming in to do a ride along, I have little faith in their ability to be respectful outside,” said Denise Sears, a member of the Civilian Review and Accountability Board, in response to Hunter.

Hunter also likened getting a ride along in that division — which covers a swathe of neighborhoods including Old Louisville, Shelby Park and South Louisville — to getting a guided tour from a minder in a dictatorship.

“He was very friendly, but it wasn’t very informative,” she said.

Hunter also said as part of her job, she distributes the inspector general’s office’s civilian complaint forms to police precincts across the city. However, there were some precincts where nobody would answer the door, she said, despite the program having the approval of the chief.

“What happens if I’m a citizen with a problem and I go to the police department because that’s the nearest [place to get help] and I’m pounding on the door?” she said. “How are they community policing when they’re in a tower that is inaccessible?”

Investigator Tracy Carter said that while they were on a ride along in the 4th Division they experienced “people walking up to the cruiser, shouting slurs” while she was with officers.

“We have to rebuild the trust people have with the police,” she said.

Another inspector, Erin Spalding, said most officers she rode with lived outside of Jefferson County and “hadn’t even come to downtown to Louisville in their life experiences.”

She added: “And they’re being put in some of the most dangerous and worst divisions. So I just wonder if they are set up for success in their roles as police officers.”

Earlier this month, Harness, the Inspector General, told LEO Weekly that he was surprised to see some officers he went on ride alongs with were unaware that LMPD was under a wide-ranging federal Department of Justice investigation.

The Office of the Inspector General and Civilian Review and Accountability Board were created by legislation signed into law in 2020 following the police killing of Breonna Taylor. The goal is to provide more oversight to LMPD.

The inspector general’s office receives complaints about LMPD conduct from the general public and conducts a preliminary investigation. Harness, the inspector general, then issues a recommendation on whether to proceed or not to proceed to the Civilian Review and Accountability Board, who vote on the matter.

At the conclusion of an investigation, the inspector general’s office has the ability to make discipline recommendations to LMPD’s chief, as well as to pass the case to prosecutors if it is believed there was potentially criminal conduct.

LMPD’s own internal breach of policy investigations have at times dragged on for a year or more (for example, as LEO reported in April, the internal investigation into an incident where an LMPD officer fired pepper balls at a TV news crew had yet to be investigated nearly two years after it had occurred).  But Harness told LEO in July he intends for his office to wrap up investigations within 180 days.

Citizens can submit complaints to the inspector general’s office using an online form, emailing [email protected], calling 502-574-5555 or by going to the City Hall Annex and filling out complaint paperwork in person.