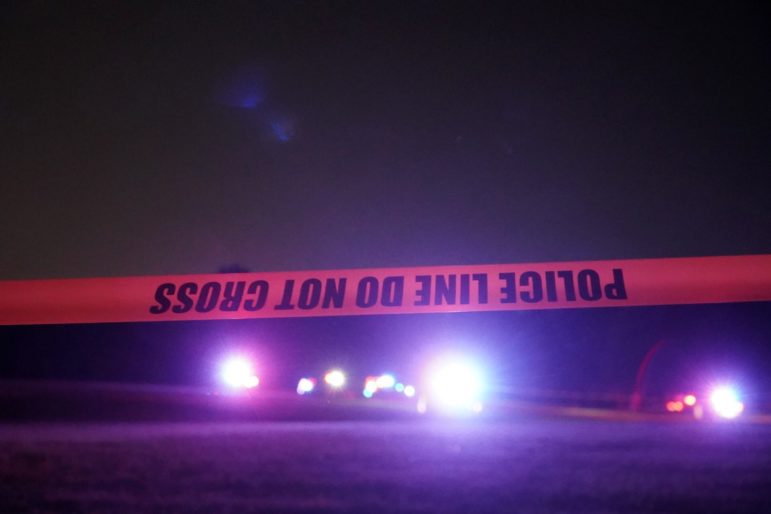 Louisville police tape off the scene at Shawnee Park on the evening of July 10, 2022.Photo by Stephanie Wolf

The Dirt Bowl basketball tournament drew hundreds of people to Shawnee Park on July 10. The games were over for the day when officers attempted to arrest 30-year-old Herbert Lee, who was wanted on multiple outstanding warrants, but some of the crowd still lingered.

Lee allegedly ran from the police and shot at them, hitting one officer’s bulletproof vest, before they returned fire. Lee was shot in the “extremities,” according to LMPD officials, and has since been released from the hospital. He’s now being held on a $1 million cash bond and faces several charges, including attempted murder of a police officer.

“It’s gonna be in the back of my head till the day I die,” said Bruce Sweeney, who was at the scene and coaches a youth basketball team called the Breewayy Warriors, named in honor of Breonna Taylor.

“There are kids out here. And they had to see this,” he said. “It sickens me.”

Police officials did not answer questions from KyCIR about their decision to engage Lee at the west Louisville park.

But the incident highlights broader concerns about how LMPD serves warrants and what precautions officers should take to keep the public safe. KyCIR reviewed the department’s protocols for serving warrants and found no guidelines for how officers should handle arrests in a public setting.

The department’s standard operating procedures require officers to fill out a risk assessment form that is reviewed and approved by a commanding officer before executing a warrant inside a building or residence so officers can consider the safety of the building and weigh the risks of entering. However, the nearly 900-page document mentions nothing about approaching someone in a park, on the sidewalk, or in any public space where other people might be around.

LMPD isn’t the only police department without a clear policy for handling situations like the one at Shawnee Park last week. But, according to a model arrest policy by the International Association of Chiefs of Police, the location, timing and manner of an arrest should be planned carefully “to minimize the danger to officers, suspects and third parties.”

Kungu Njuguna, a policy strategist for ACLU Kentucky, said incidents like the Shawnee Park shooting only increase divides between police and the Black community, especially since this happened after the Dirt Bowl, an event with a longstanding history in the West End.

“It adds to that generational trauma of distrust and the belief that the police aren’t here to protect us, they’re here to harm us,” he said.

The department is conducting an internal investigation of the Shawnee Park incident, despite a previous agreement that Kentucky State Police would investigate all of their officer-involved shootings. Louisville’s newly created Inspector General’s Office also announced an investigation into the shooting.

A department spokesperson said officers were patrolling the tournament when they recognized Lee, who at the time had about a dozen outstanding warrants against him, including theft of a firearm and possession of a handgun by a convicted felon. LMPD Chief Erika Shields said during a press interview shortly after the shooting that officers were “very judicial” to wait until the tournament had ended to serve the warrant.

But Mike Lawlor, an associate professor of criminal justice at the University of New Haven, said the officers’ decision to pursue Lee in the park was reckless. Unless the situation was urgent and the person presented an immediate danger to the public, he said LMPD should have waited.

“The police knew or should have known this guy was carrying a firearm,” Lawlor said. “He had a track record of this. He had known convictions for it.”

If any bystanders had gotten hurt in the shootout, he said the city would likely have a lawsuit on its hands, “and the argument would be that you knew or should have known that it was likely innocent people would be injured here, yet your officers did it anyway.”

Lawlor said there should always be some type of accountability when it comes to serving warrants or pursuing suspects, despite the location.

“More and more police departments are putting very severe restrictions on high-speed chases and no-knock warrants because they’re just a recipe for disaster,” he said. “Innocent people can get killed.”

Three months after Breonna Taylor was killed by police during a raid on her home in 2020, the Louisville Metro Council voted unanimously to ban no-knock warrants in the city. And this year LMPD reimplemented a policy to reduce deaths and injuries caused by vehicle police chases, after seeing a significant increase in bystander deaths and injuries.

The Shawnee Park shooting didn’t involve a no-knock warrant or a car chase and nobody died in the incident, but it still highlights concerns about when the pursuit of a suspect outweighs the risks — and how unclear protocols and risky decision-making have the potential to end in tragedy.

On July 14, four days after the shooting, police officials released a partial and edited version of the body camera footage from the incident, saying the rest would be available “upon the completion of necessary reductions based on Kentucky open records law.” (Prior to 2020, it was LMPD policy to release body camera footage within 24 hours of a police shooting.)

That evening, activists gathered at the Carl Braden Memorial Center in the Parkland neighborhood for a press conference, where they expressed frustration about the incident – and skepticism about what police claim happened at Shawnee Park.

“Louisville Metro Police Department, you have failed this city again,” said community activist Chris Will, commenting on the limited footage. “Why would you not show the interaction from the beginning right to the end?”

One activist at the gathering, who goes by A.B., questioned why officers chose to arrest Lee in a public place, “with women and children at a family event.”

“The police was there to protect us,” he said. “Not to add to our trauma to this community and our kids.”

Another activist, Jeff Compton, suggested that officers wouldn’t have approached the situation the same way if it happened in a white community.

“For them to chase him in the middle of the park with kids playing in a family environment … Would you guys do this if it was St. Matthews? Would you do it if it was in Georgetown?” he said. “No, you only want to do it in our communities.”