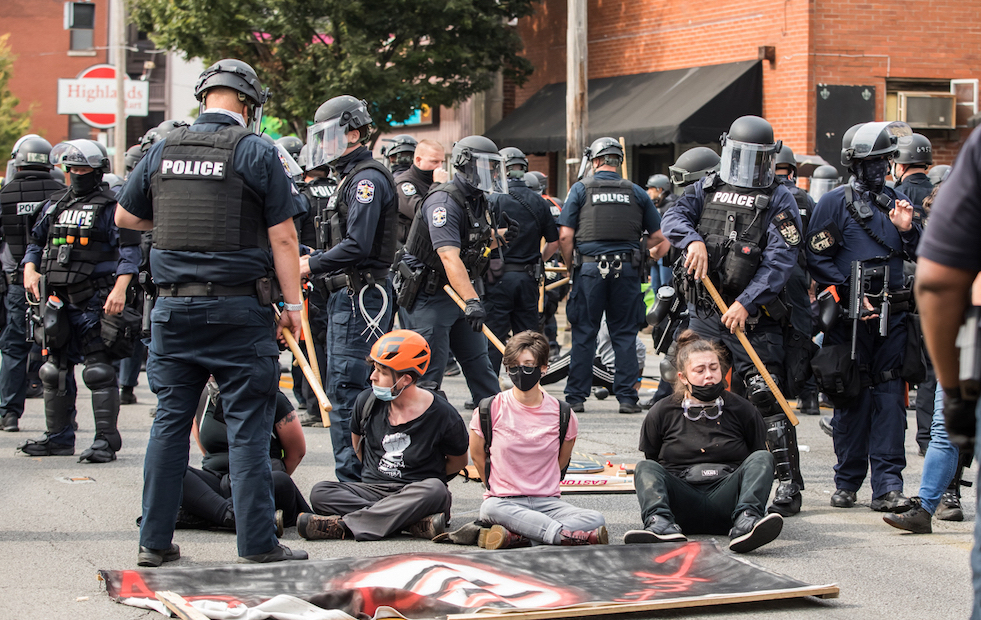 Protesters ordered to sit in Bardstown Road in The Highlands in 2020. | Photo by Kathryn Harrington.

Louisville’s newly-created inspector general’s office could speed up investigations into police misconduct, with the office free of obstacles that sometimes drag out Louisville Metro Police Department breach of policy investigations for a year or more.

LMPD often waits for criminal investigations related to allegations of officer misconduct to conclude before beginning internal investigations that could lead to an officer being fired. But that practice can result in long delays: As LEO Weekly reported in April, for example, LMPD had not started a breach of policy investigation into an officer who fired pepper balls at a TV crew nearly two years earlier as it waited for the FBI to conclude its own probe into the incident.

Headed by Edward Harness, the Office of the Inspector General is tasked with investigating allegations of misconduct and can make disciplinary recommendations to the chief of police. The office plans on being free of the red tape that has held up LMPD investigations.

“We could certainly do an administrative investigation that would not have any criminal implications and not interfere with a criminal investigation,” said Harness, Louisville’s inspector general, who arrived in Louisville in December after serving a similar role in Albuquerque, New Mexico, at a time when that city’s police department was under a federal consent decree. “My experience with the Department of Justice, my six years in Albuquerque, was that the best practice was to have simultaneous investigations taking place, not waiting until the criminal is finished.”

Even in cases where no criminal investigation is taking place, LMPD has taken longer than the 180 day limit for investigations outlined in the police union’s collective bargaining agreement with the city to investigate breaches of policy. Harness said his office plans on finishing its investigations in a timely manner.

“I’m coming from an environment where we had to do them in 90 days,” he said. “So, as long as we’re gaining access to all the information that we need, and our caseload remains manageable, there’s no reason for us not to be able to get it done in 180 days.”

The Office of Inspector General has the ability to make recommendations to LMPD Chief Erika Shields, but she ultimately decides whether discipline is merited. The inspector general office also has the ability to pass the case along to prosecutors if their office finds potentially criminal conduct.

LMPD did not respond to repeated requests for comment about how the addition of the inspector general’s office would affect internal LMPD investigations or the discipline process.

In a sit-down interview with LEO, Harness discussed the process by which citizens can submit complaints against police officers, his office’s role in the city and the wide-ranging Department of Justice investigation into Louisville’s police force.

A less-intimidating process for citizen complaints

The Office of Inspector General will investigate allegations of police misconduct brought forth by the public. Harness said there is no restriction on bringing old cases of alleged misconduct forward, but warned that in his experience, after six months have elapsed it can be difficult to find evidence in these kinds of cases. People can also bring forward police misconduct cases that were already investigated by LMPD.

After beginning to take in complaints at the start of June, Harness said the office had received eight complaints through early July. Citizens can submit complaints to the inspector general’s office using an online form, emailing [email protected], calling 502-574-5555 or by going to the City Hall Annex and filling out complaint paperwork in person.

After a complaint is submitted to the inspector general’s office, the 11-person Civilian Review and Accountability Board will then vote on whether to proceed with a full investigation. At the conclusion of investigations, the board reviews the findings of the inspector general’s office. Harness said the findings would also be posted publicly, though the officers being investigated and complaining parties will not be identified.

Both the inspector general’s office and the Civilian Review and Accountability Board were the result of Metro Council legislation signed into law in late 2020 aiming to give more oversight over the police department following the police killing of Breonna Taylor and subsequent unrest in Louisville.

Harness told LEO that the creation of the inspector general’s office will make it easier and less intimidating for citizens to come forward with complaints about police conduct.

“One of the services we provide is access. So you no longer have to go to [LMPD’s Professional Standards Unit] to swear out your complaint, you can come to us and do that,” he said. “So the process will be much less intimidating by providing the open access for complaints and investigations. That’s a big step.”

In addition to investigating police misconduct, the Civilian Review and Accountability Board also has the ability to recommend changes in LMPD policy and training.

Ahead of investigating complaints, Harness and his office’s investigators embedded with LMPD officers for 40 hours as required by the legislation that created inspector general’s office.

Harness, who was previously a Milwaukee police officer, said he was surprised to encounter LMPD officers who did not know their department was currently under a wide-ranging federal pattern or practice investigation.

“I was a little surprised — a couple of the ride alongs I went on, some of the officers weren’t aware of the Department of Justice investigation. And they certainly didn’t know what our role was,” he said. “So we’re going to be going back out and I’ll be going to all the roll calls across the city now that we’re up and functioning and let them know who we are and what we’re doing.”

However, Harness said the implementation of the consent decree in Albuquerque was hamstrung by a police chief and other city leaders who were initially resistant to its changes and obstructed progress.

He has hope that things will go more smoothly in Louisville.

“What I see here is an administration and a chief who are ready to embrace the changes that are brought forth,” he said. “So I wouldn’t anticipate that level of resistance or obstruction happening here.”