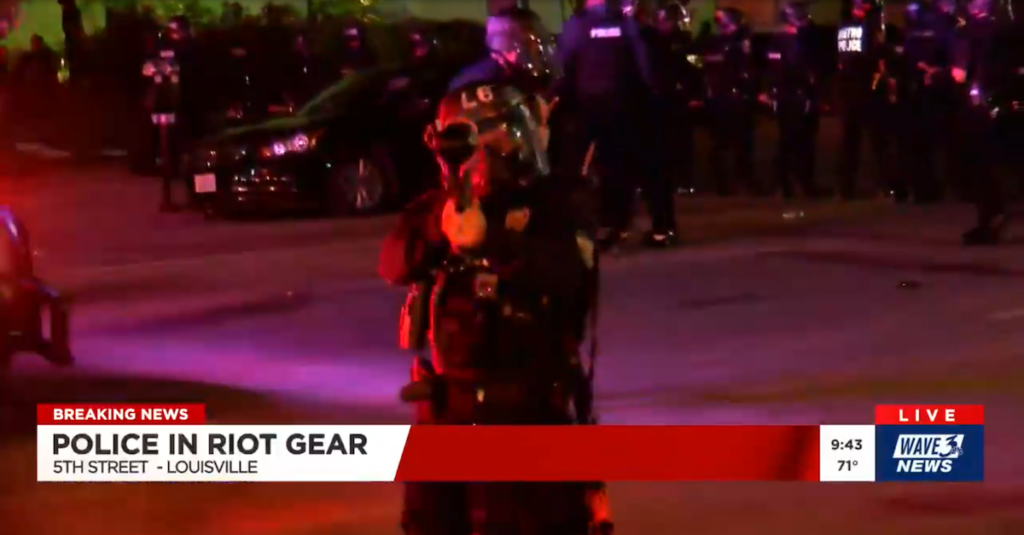 On May 29, 2020, Louisville was experiencing its second night of mass protests over the police killing of Breonna Taylor when a Louisville Metro Police Department officer fired pepper balls at a WAVE 3 news crew as they were live on air.

The dramatic footage of the incident — which clearly showed a riot gear-clad officer approach the journalists, aim his weapon and open fire — quickly went viral online. The episode was held up alongside the arrest of a CNN reporter live on air in Minneapolis that morning as a cut and dry example of police openly violating the basic tenets of press freedom as unrest spread across the United States.

This just happened on live tv. Wow, what a douche bag. pic.twitter.com/dQKheEcCvb

LMPD immediately said that the incident would be investigated and that any disciplinary action deemed necessary would be taken. That night, an LMPD spokesperson apologized for the incident and said that the video appeared to show members of the media being “singled out.” Asked about the incident in a Metro Council committee meeting later in the year, LMPD’s then chief said it was under investigation for policy violations.

But nearly two years after WAVE 3 News reporter Kaitlin Rust and cameraman James Dobson were struck by pepper balls, LMPD has informed LEO Weekly that it has yet to begin its internal investigation for potential breaches of policy. Such an investigation, carried out by the department’s Professional Standards Unit, is necessary before any disciplinary policy violation charges can be brought against the officer by the LMPD.

Instead, LMPD told LEO that the department is waiting for the Federal Bureau of Investigations to wrap up its own investigation of the incident, which could potentially lead to federal charges and prison time for Dusten Dean, the officer who fired the pepper balls. In the interim, Dean remains employed by LMPD on administrative reassignment.

“The investigation has not yet begun as PSU is waiting for the FBI to conclude its investigation and provide PSU with any files that PSU can use for its investigation,” read part of a response to an open records request that the mayor’s office attributed to Sgt. Anthony Wilder, a member of LMPD’s Public Integrity Unit, which is tasked with conducting criminal investigations of department members.

“From what I saw in the video, it’s hard to imagine any legitimate reason for this long of a delay in investigating this,” he said. “Regardless of if there are legitimate reasons, possibly, the appearance of foot dragging and lack of accountability is inevitable with these kinds of delays. And I think sometimes — and I’m not sure it’s the case in this situation — but sometimes it’s a matter of the longer you wait it out, the less people are going to care.”

In response a list of questions sent by LEO — including questions about why this case was handled differently — an LMPD spokesperson issued a brief statement saying: “Determinations on the course of investigations related to employees are made on a case by case basis. Officer Dusten Dean remains on administrative reassignment.”

The two former WAVE 3 employees who were hit say they were never contacted by LMPD to give a statement about the incident.

“I would have assumed that the PSU investigation would have been complete by now,” said Rust, who was live on the air with anchors in the newsroom as she and Dobson, the camera operator, came under attack. “I don’t see how a federal investigation into civil rights violations would prevent them from doing that because this is a policy violation that there is video of the incident. I don’t see what they would need from a federal agency what they wouldn’t be able to tell themselves through looking at the video and talking to all the parties involved.”

While they were never contacted by LMPD, Dobson said the pair did an interview with the FBI on June 8, 2020, a little more than a week after the incident.

In video footage from the incident, Dean can be seen walking away from a line of police officers and heading towards the journalists with his pepper ball gun raised before opening fire. “I’m getting shot!” exclaimed Rust. At one point, Dean pauses and appears to make adjustments to his weapon before again taking aim and firing more. Of officers that can be seen in the video, Dean is the only one who appears to be reacting to the presence of the news crew.

“I am disappointed that they’re not looking into it, but I’m not surprised either,” said Dobson, who kept his camera trained on Dean while under fire and was hit several times. “I think that it was terrible what happened, but any reporter on the ground saw a number of violations to protesters every night.”

Dobson, who said he was wearing a protective Kevlar vest that night, said one of the pepper balls struck him in the collar bone, severing nerves leading to his left arm. As a result, he said, he lost feeling in his fingertips and had tingling and a loss of sensation in that arm for months.

Rust, who said she was hit once, said it felt like time was moving in slow motion as she watched Dobson get hit.

“Repeatedly, I just watched the pepper balls explode up his legs, up his torso, his chest and eventually ending right in the camera lens by his eye. He got hit multiple times,” she said.

Both Rust and Dobson have since left Louisville. Rust is now working for a TV station in New Orleans, Louisiana and Dobson took a job with a Missoula, Montana station.

Dean is one of several LMPD officers who has been federally investigated for their actions during Louisville’s protests.

In announcing the firing of former LMPD officer Cory Evans, who plead guilty in federal court of hitting a kneeling, surrendering protester in the back of the head with a baton, the police department told local media outlets last year that they had “stayed” their investigation “in deference” to the federal investigation.

However, Evans’ case still began as a PSU investigation, with the protester who was hit, Marty Chester, giving statements to LMPD investigators. It also yielded disciplinary action and federal charges in a little over a year’s time.

In March, LMPD officer Katie Crews was federally indicted over firing a pepper ball gun in Louisville’s West End in the moments leading up to the high-profile killing of BBQ chef David McAtee. After the federal charges were announced, LMPD said Crews had been fired from the department the month before. Documents obtained via an open records request showed that Crews had been terminated from the department over social media posts she had made as well as her actions on the night McAtee was killed.

In a statement to LEO, Tim Beam, a spokesperson for FBI’s Louisville field office said the agency does not get involved in LMPD’s administrative investigations and added that they could not comment on the timeline of the agency’s investigation into Dean, the officer who fired pepper balls at the WAVE 3 crew.

Over the course of 2020, LMPD repeatedly said that that incident and other potential misuses of pepper balls must be investigated.

“If we inappropriately used pepper balls, then whoever does that needs to be subject to discipline for it. In my mind there’s no ambiguity about that,” said Lt. Col. Josh Judah in a Sept. 6 Metro Council committee meeting when asked about reporters who said they had been targeted with pepper balls. He added: “We don’t condone, we don’t train, we don’t allow our officers to walk around looking for targets to pepper ball. If there are specific allegations of misconduct, those need to be investigated.”

At a Sept. 28, 2020 Metro Council committee meeting, Metro Council President David James asked then-chief Robert Schroeder if there was an internal investigation for policy violations related to the targeting of the WAVE 3 crew.

Speaking at a virtual press conference on May 29 soon after the pepper balls were fired at Rust and Dobson, LMPD spokesperson Jessie Halladay said: “I want to apologize, as obviously, um, not something that should have occurred in terms of if she was singled out as a reporter. And that obviously is what the video looks like occurred.”

At the time, Halladay said they had not determined whether the officer was with LMPD or Metro Corrections, but said that the department would “get to the bottom” of what happened and take disciplinary measures if warranted.

At the time that Dean fired at the WAVE 3 crew, LMPD policy was that pepper balls and other chemical agents were permitted to be used when “the officer reasonably believes that a degree of force is necessary to overcome actual, or anticipated, resistance by the suspect.” However, when using pepper balls, “the head, neck, and face should be avoided, unless exigent circumstances exist.”

LMPD’s policy on pepper balls was later updated to say that when used to move “disorderly or unlawful crowds” they should be aimed either above the crowd or at the ground. The new policy says officers should not aim at the body of an individual “unless the individual is presenting a safety threat to the officer or another person, or is engaged in arson or serious property damage.”

The sometimes glacial speed of LMPD’s internal investigations is something that chief Erika Shields was openly critical about when she arrived in Louisville last year.

Speaking at a meeting of the Louisville Forum, Shields said she arrived to a backlog of slow-moving internal affairs investigations and was shocked at the department’s lack of a disciplinary matrix governing how misconduct cases are handled.

“When I came in here, there’s 70 — seven, zero — internal affairs files backed up in the chief’s desk. I’m not doing that,” she said.

Shields, who earned a reputation as a disciplinarian when she was chief of Atlanta’s police force, added that LMPD’s investigations “have to move at a faster clip, we owe it to the public.”

LMPD did not respond to questions about whether the department had instituted a disciplinary matrix or taken other reforms to address its internal investigations process.

Kraska, the Eastern Kentucky University professor, said that by taking so long to investigate cases of alleged officer misconduct during the 2020 Breonna Taylor protests, “there’s a head nod to the line personnel that are going to be handling the next social unrest situation that maybe a few bad apples did a few things, but overall, the really aggressive approach that we took was approved of and not much has happened.”

He added: “Not only is there no deterrent effect, but I think there’s also a message of ‘This is okay.’”