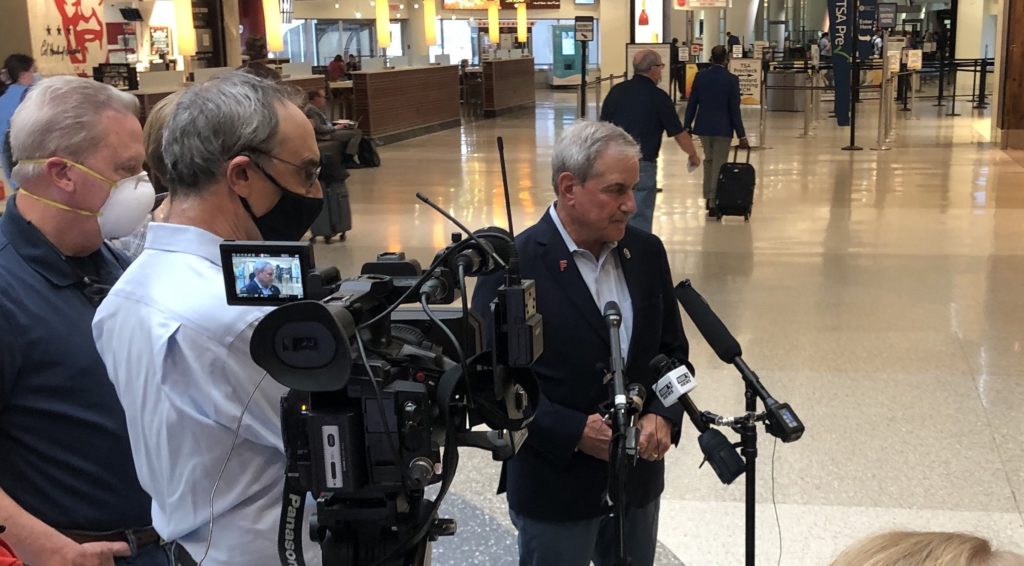 John Yarmuth speaks to reporters at the Louisville Muhammad Ali Airport a day after announcing his retirement. | Photo by Scott Recker.

When news broke yesterday that U.S. Congressman John Yarmuth, who has represented Louisville in the House of Representatives for the last decade and a half, would be retiring, and not seeking reelection at the end of his current term, it created an instant political scramble, highlighting the major political vacuum that had suddenly formed.

Yarmuth, who is the chair of the House Budget Committee and the founder of LEO Weekly, has won eight elections in a row, looking virtually untouchable during several cycles. But, Tuesday’s announcement opened the door for a new Democrat to take over the left-leaning district — and for Republicans to possibly have their best shot in years at the seat.

Almost directly after Congressman Yarmuth dropped a video on social media with the announcement, the early framework of a primary rapidly accelerated. Less than 10 minutes after Yarmuth’s video, Kentucky’s Senate Minority Floor Leader Morgan McGarvey announced that he would be running to replace Yarmuth.

“With the news that our outstanding Congressman John Yarmuth is retiring, I’m excited to announce my bid for US Congress in #KY03!” he tweeted.

McGarvey, who has a stable Tik Tok presence, followed up his announcement with a donation link minutes after, featuring a photo of himself with a campaign logo.

The page also highlights his record in the state legislature, including his fights  to preserve marriage equality, help victims of abuse and human trafficking and to promote clean energy. McGarvey was elected to the Senate in 2011.

State Rep. Attica Scott has already been in the race, having announced her campaign in July. Scott, who is also a well-known activist, defeated a 34-year incumbent in 2016 to become the first Black women elected to the Kentucky General Assembly this century. Her campaign page lists her priorities as Racial Justice, Health Justice, Environmental Justice, Employment Justice, Marijuana Justice, Student Loan Justice and Ballot Justice. She was extremely active and visible during the protests that followed the police killing of Breonna Taylor, and she’s widely believed to be the most progressive candidate that has entered — or is testing the waters — of this election.

In the hours that followed Congressman Yarmuth’s video, his son, Aaron Yarmuth — who used to own LEO Weekly — told the Courier Journal that he was “considering” running for the seat.

Over at LEO, we’ve heard murmurings that Aaron might run, just like everyone else, but since he sold LEO in June to Euclid Media Group, there’s been limited contact between him and the publication.

Personally, I (LEO’s managing editor) haven’t spoken with him since the transition. But I called him up this morning to try to get a bit more insight in terms of where he is in the process.

Today, he told LEO that he’ll be spending the next few weeks getting advice from people he trusts before he announces whether he plans to run for the seat, which his father will be departing from in 15 months.

“Even though I’ve know my dad’s plans to retire, pretty much longer than anybody, I haven’t been able to have the conversations with family and friends that I would need to have confidence in any decision I would make, just because I couldn’t risk breaking his announcement, his news,” he said. “I plan on spending the next week or so having those conversations, and just getting a sense from those who know me best, and who I trust, that I could have confidence in whatever decision that I make.”

In a statement released after Aaron Yarmuth expressed an interest in running, Scott said, “I said this when launching our campaign for Congress, no political seat belongs to any family member, front-runner, or legacy, and the people of Louisville deserve someone who will best fight for their needs in Washington. This is the people’s seat, and I am honored by the thousands of people who believe that another world is possible and who supported our campaign early on when we launched in July.”

In response, Aaron Yarmuth said that he’s proud of his dad’s accomplishments, and that they agree on many things, but that, if he runs, he wants to establish his own political presence and perspectives.

“In an ideal world — or in a hypothetical world — I’d be charting my own course without my dad’s footsteps in front of me, but, at the same time, he and I are so close, and have enjoyed this journey together for so long, that it’s also not something that I, in any way, am embarrassed about.”

“I take Attica’s comment as more of a political cliche than a personal attack, or a personal slight toward me,” he continued. “I don’t think any voter needs to be reminded that this isn’t a family-owned seat.”

He told LEO that “inequality is a monumental issue that needs to be addressed,” saying that it’s an umbrella that covers all other issues. He said said that he thought pressing issues for the district are health care, gun violence and climate change.

Josie Raymond, a Democrat who represents Louisville in the Kentucky House of Representatives, told LEO that she is also weighing a run.

“I’m considering running to represent Louisville in Congress, and succeed the incomparable Rep. John Yarmuth, because I’m laser-focused on supporting and strengthening families and creating opportunity,” Raymond said in a statement to LEO. “I’m living the childcare and workforce challenges so many of our neighbors are facing and am eager to expand my work to end poverty in America, protect abortion rights, and lift up kids, women, and workers with universal pre-k. I love this place and these people.”

Being a district that’s a blue island in a sea of red, there’s almost certainly going to be more Democrats that announce in the coming months.

With the upcoming election cycle for Congress being a midterm — which can be volatile for a party holding a significant amount of national power — the Republicans could also feel emboldened by the retirement announcement.

Kentucky GOP chair Marc Brown said in a statement: “Chairman Yarmuth’s announcement shows Democrats realize their chances of maintaining control of the U.S. House of Representatives are slim to none. We look forward to doing our part to helping retire Nancy Pelosi as speaker in 2022.”

Although, at a press conference held at the Muhammad Ali Airport in Louisville on Wednesday afternoon, Congressman Yarmuth doubled down on earlier remarks that he was retiring because he wanted to spend more time with his family, not because of any anticipated political swing.

He also said that he is optimistic that a Democrat will follow him and he felt “good about our chances” in the election.

The congressman reinforced that, at this time, he would only support Aaron, if he decides to run, but he also told LEO that whoever comes out of the Democratic primary has his backing.

“100 percent. 100 percent. Whoever wins the primary…That’s my number one political objective, is to make sure that it’s a Democrat succeeds me, whether it’s Attica, Morgan or whoever else might run,” he said.