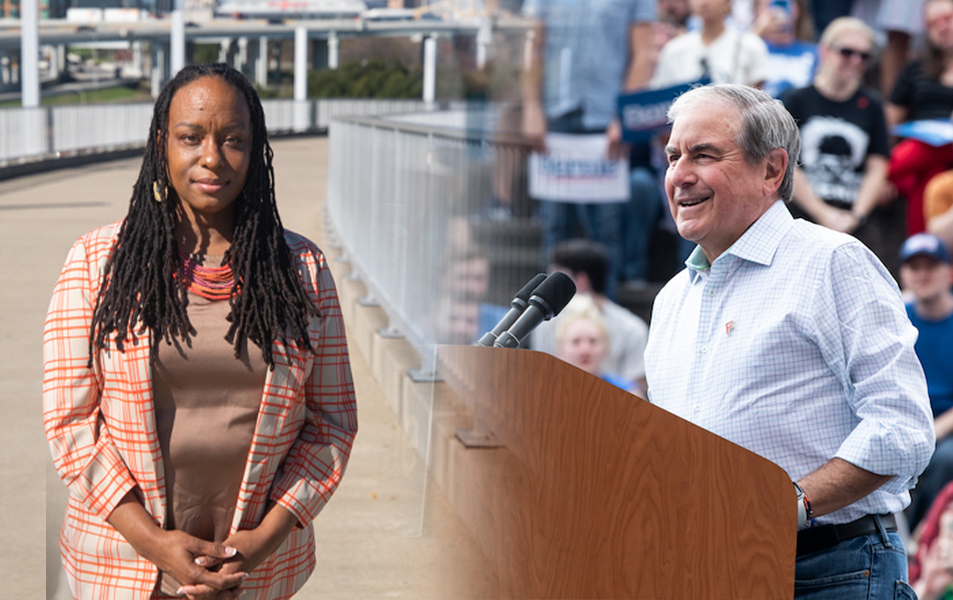 Scott, who has made her mark as a strong fighter for racial justice and progressive causes in Kentucky’s Capital, will be up against a popular Democratic incumbent with his own progressive cred… and a senior position in Congress.

For many Democrats, choosing who to vote for will likely come down to the fine differences between them. So, let’s get granular. Here’s a look at their political careers: When they got started, their landmark causes, defining moments and potential campaign pitfalls.

Born: Jan. 30, 1972
Before office: Community activist, adjunct faculty member at Bellarmine University (2009-2011), Jefferson County school board candidate (2010)
Political positions held: Louisville Metro Council, District 1 (2011-2014); Kentucky House of Representatives, District 41 (2017-Present)
Background: Scott was named after the Attica prison uprising. She grew up in the Beecher Terrace affordable housing complex. Her mother died of an overdose at 16, and her dad was caught in the cycle of incarceration.

Scott was chosen by the Louisville Metro Council to replace longtime council member Judy Green, after she was removed from office for ethics violations. She was reelected to her post in 2012 and served until 2014, when she lost the post to Jessica Green, the daughter of Judy Green. The election was marked by political attacks, including one that targeted Scott’s stance on plans to establish a Walmart in Louisville’s West End. Scott had expressed concerns about the idea, including the city’s proposed incentives for the development.

When Scott was elected to the Kentucky state House, she became the first African American woman elected to the Capital in almost 20 years, garnering her national press.

In 2016, Scott publicly opposed a policy at Butler Traditional High School in Louisville that prohibited dreadlocks, cornrows and twists.

In 2020, Scott was tear gassed and arrested while protesting with other demonstrators demanding justice for Breonna Taylor in downtown Louisville. The charges were dropped, and Scott is now involved in two lawsuits against the city.

In 1985, Yarmuth made the decision to transition from being a liberal Republican to being a Democrat over concerns with President Ronald Reagan, according to the Courier Journal. He made his final decision to split when evangelical leader Jerry Falwell Sr. called anti-apartheid activist Desmond Tutu a “phony.”

In 2006, Yarmuth beat Republican incumbent Anne Northup to become a member of the U.S. House of Representatives. Northup had been in her seat since 1997.

In 2010, Yarmuth voted for the Affordable Care Act.

In 2018, after serving on the Representatives’ Budget Committee for several years, he became the chair, a coveted position. In this position, he requested documents to investigate allegations that former President Donald Trump had withheld defense funds to the Ukrainian government in exchange for political favors.

Ban the Box, a bipartisan law that barred the city from asking about criminal convictions on job applications

Legislation to raise the minimum wage in Louisville to $9 an hour. It passed but was struck down by the Kentucky Supreme Court.

A resolution to restore voting rights to Kentuckians who had been convicted of felonies once they served their time.

Scott was the vice chair of Metro’s vacant property committee, which collapsed after Scott lost her office. She also supported finding a revenue stream for the Affordable Housing Trust Fund, although that did not happen while she was in office.

Kentucky House of Representatives: In recent years, Scott has been the primary sponsor of bills that would have:

During her career, Scott has introduced over 80 bills, but none have passed, although this is not surprising for a General Assembly locked into a Republican supermajority. While she has been in office, only one Black legislator has passed a bill that they primarily sponsored. Meanwhile, white Democrats have managed to pass 4.6 of their bills per year on average.

Scott has also co-sponsored bills that would have regulated guns, increased the minimum wage, protected reproductive rights and expanded cannabis legality. She co-sponsored a statewide Fairness Law, as well.

According to Congress.gov, Yarmuth has sponsored 99 bills and has been a co-sponsor on more than 2,000 in his 14 years in office.

Some significant ones include:

In 2019, Yarmuth signed on as a co-sponsor of “Medicare for all” bills, a significant move in his role as Budget Committee chair. The Courier Journal reported at the time that Yarmuth been a supporter of single-payer health care since 2007, co-sponsoring several bills over the years. But, he didn’t become a co-sponsor of the 2019 bills until after he had hosted hearings about Medicare for All and after the Louisville Democratic Socialists of America branch threatened to run a candidate against him.

In 2021, Yarmuth sponsored the American Rescue Plan Act, a wide-ranging, economic recovery plan in the wake of the COVID-19 pandemic. This $1.9 trillion plan included another round of stimulus checks and payments to state and local governments. Kentucky has been allocated $2.183 billion and Louisville is set to receive $388 million.

Every politician has dirt with their name on it, waiting to be flung. Here’s what might foil Scott’s and Yarmuth’s races.

Tamika Palmer, Breonna Taylor’s mother, has come out in support of Yarmuth over Scott. Palmer previously called Scott a “fraud” in a Facebook post, but she has not commented on why.

Yarmuth has declined to embrace the Green New Deal, and he has said in the past that he does not support the move to abolish Immigrations and Custom Enforcement. These are two progressive issues that Scott is running on. •

[Editor’s Note: This story has been updated to more accurately reflect U.S. Rep. John Yarmuth’s record on Medicare for All.]