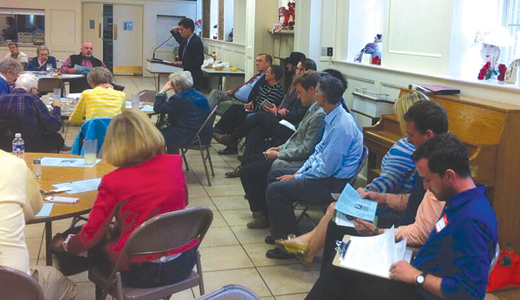 When the late Councilwoman Judy Green was kicked out of office by her fellow Council members in 2011, Attica Scott was appointed to her seat and won the election the following year. Now Scott faces the daughter of the woman she replaced, Jessica Green.

During Scott’s tenure on the Council, she has been a tireless advocate to protect her constituents from pollution near the LG&E Cane Run power plant and Rubbertown factories, as well as address the blight of vacant and abandoned properties in District 1 and support a dedicated funding stream for the Affordable Housing Trust Fund. Scott sponsored the Ban the Box ordinance that passed the Council this year, and is leading the charge for the Council to increase the minimum wage. She is endorsed by the Fairness Campaign and quite possibly every single labor union in Louisville.

Green, a 33-year-old attorney and former assistant prosecutor, criticized Scott for trying to push for wage and local hiring concessions for a Walmart development in the West End receiving city taxpayer dollars. Green has also swiped at Scott online, implying Scott “works against” Mayor Fischer and “opportunistically moved to the area to seek office.”

We believe this is all the information you need, District 3.

Councilwoman Hamilton has served this West End area dating back to before the merger. In recent years, Hamilton has focused heavily on restricting the availability of alcohol sales in her district, arguing that these often correlate with crime. She is now trying to ban transitional housing in two of the district’s more relatively affluent neighborhoods. Her long-shot opponent is Keith Morgan, a TARC custodian who wants the city to invest more in youth programs.

Councilwoman Marianne Butler was first elected in 2006 and touts her record of pushing through increased trash pickup and street sweeping in the Metro area, as well as an ordinance that allows city government to impound vehicles involved in illegal dumping. Butler is supported by a large number of labor unions and has amassed 10 times the amount of contributions as her two opponents combined.

Challenger Khalilah V. Collins is a former Marine and social worker who works to prevent teen domestic violence with the Center for Women and Families. Collins is running on a platform of increasing the minimum wage, fully funding the Affordable Housing Trust Fund, and increasing investment in youth programs. She has been endorsed by the Fairness Campaign and the local steelworkers union.

Blake Oliver is a former state lobbyist and consultant whose campaign appears to consistently blame Butler for poor government services in the district, as well as “ethics violations, FBI investigations and wasteful spending” within the Council, though he provides little detail on what Butler has to do with the latter three.

Councilman Dan Johnson is the longest-serving member of Metro Council, dating back to the early ’90s, pre-merger. Johnson is pushing for a renegotiation of the Yum! Center’s lease with U of L in light of the Arena Authority’s difficulty making debt payments and the prospect of the city paying the maximum contribution for many years to come. In the wake of the Waterfront Park violence, Johnson says he will push for city funds to go toward building a larger juvenile detention facility to lock up more children who’ve committed crimes.

Challenger Erich Shumake is an ordained minister who says the district needs a fresh voice who isn’t concerned about bringing an NBA basketball team to the city. When asked by The Courier-Journal why he is running, Shumake simply replied, “It’s a free country.” Catchy slogan.

The Jefferson County Attorney race for the top position overseeing local prosecutions is a matchup between well-funded controversial experience and not much experience at all. Current county attorney Mike O’Connell has served since 2008, with a long career as a judge and private attorney before that. O’Connell says he is committed to “vigorous prosecution to keep our neighborhoods safe,” and touts his current restorative justice pilot project.

However, his challenger, Karen Faulkner — a 33-year-old private attorney with experience as a public defender — cites the “atmosphere of hostility” that O’Connell has created in the courtroom, often publicly clashing with judges and defense attorneys. Faulkner also emphasizes criticism that O’Connell compels his employees to contribute to his campaign (making up nearly half of his hefty total), and is trying to stack local courts by letting several of his prosecutors run against sitting judges he’s clashed with. O’Connell counters that Faulkner has no prosecutorial experience, and says his ruffling of feathers is simply an outcome of doing his job effectively.

O’Connell has spent roughly 15 times the amount of Faulkner in this race, and has the endorsement of the Fairness Campaign and many local unions, though several local unions broke away from him to endorse Faulkner, including the Jefferson County Teachers Association.

The Republican primary for this state House seat appears to be a classic matchup between an establishment party figure and a Tea Party upstart. Shellie May is the former chairwoman of the Jefferson County GOP, while Phil Moffett ran as a Tea Party candidate in a surprisingly competitive race for the GOP gubernatorial nomination in 2011.

May has a great deal of support from local Republican office holders, but also supports expanding gaming and has stressed a willingness to listen to all sides of an issue. On the other hand, Moffett is running on an aggressive Tea Party platform that includes abolishing the state income tax, opposing expanded gaming, and pushing for charter schools. Interestingly, May received a maximum donation from the JCPS teachers’ union PAC, which is hostile to charter schools. Moffett has criticized May for avoiding candidate forums and her hesitance to reveal many of her policy positions.

May has raised twice the amount of contributions as Moffett, though he has received support from GOP establishment figures such as Cathy Bailey and banker Terry Forcht, as well as Tea Party-friendly Congressman Thomas Massie and Commissioner of Agriculture James Comer.