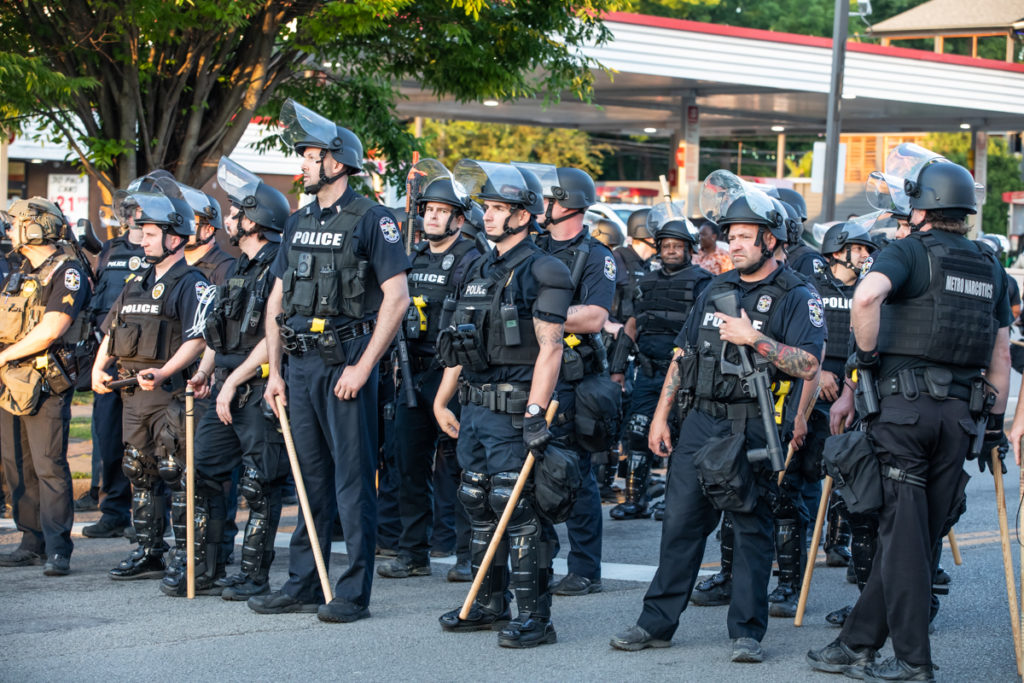 The federal lawsuit accuses the police of using a military, unreasonable response to peaceful protest. | Photo by Kathryn Harrington.

Attica Scott attended the second night of protests in downtown Louisville in several roles: as a state representative; as a mom whose 19-year-old daughter wanted to go; and as a person wanting justice for Breonna Taylor, whose death ignited the demonstrations.

Louisville police shoved and tear gassed Scott, she said, while she and the vast majority of the other protesters she was with peacefully protested. And, it was this forceful response that has led to Scott becoming a plaintiff in a lawsuit against the city and the Louisville Metro Police Department, demanding that they halt violent tactics against nonviolent demonstrators.

“Part of it reminds us why we’re out there,” said Scott, speaking last week to LEO about her experience over two months afterward. “We’re protesting against police violence and police are violently responding to our protest. It’s a reminder of why we must show up. We have no choice. This isn’t an option for us. This is about life or death.”

Scott’s Kentucky House district, 41, spans from Chickasaw to St. Matthews. In 2017, she became the first Black woman to serve in the state legislature in almost 20 years.

LMPD’s use of “crowd control weaponry” on peaceful protesters, including tear gas, flashbangs, pepper balls, batons “and other military grade technology,” is a violation of their First Amendment rights to peacefully protest and their Fourth Amendment rights to be free from excessive force, according to the federal lawsuit filed on behalf of six injured protesters and the Kentucky Alliance Against Racial and Political Repression. The lawsuit was brought in U.S. District Court for the Western District of Kentucky by the NAACP’s Legal Defense and Educational Fund, the ACLU of Kentucky and the law firm Emery Celli Brinckerhoff Abady War & Maazel LLP.

“People have a fundamental human right to participate in protest activity, to march peacefully, gather and assemble and to present their grievances and concerns about government to their government,” said Aaron Tucek, a legal fellow with ACLU-KY working on the lawsuit.

The use of crowd control weaponry also amounts to battery and assault on the protesters, the lawsuit argues.

The complaint asks the city to:

The lawyers involved have asked for the lawsuit to be designated as class action, which would allow other protesters to join if they attended demonstrations from May 28 to July 30 and were subject to crowd control weaponry.

As of Aug. 7, the city had yet to file a response to the lawsuit, but Mayor Greg Fischer’s spokesperson Jean Porter said, “The complaint raises very important issues as we, as a city and a nation, work through the complexities of balancing personal and public safety with a person’s First Amendment right to protest. We’ll work with the Jefferson County Attorney’s office on any further response.”

A spokesperson for the Louisville Metro Police Department declined to comment.

Two other people who attended the protests have filed separate lawsuits against the city for the police’s use of crowd control weaponry. Jonah Albert said in a lawsuit that he was shot with an “unknown projectile” by either Kentucky State Police or Louisville police while peacefully protesting on May 30. And, Dave Johnson, a Louisville attorney, says in his complaint that he was tear gassed by police while observing and photographing the protests.

Both the NAACP’s Legal Defense Fund and the ACLU have filed similar suits in other cities where police have responded violently to protests. The NAACP did so in July for the residents of a Black West Philadelphia neighborhood who experienced “excessive and unwarranted use of militaristic force.” And, ACLU affiliates in other areas have filed suits in Denver, Seattle, Minneapolis and Washington, D.C.

“We’re hopeful that this is part of a larger conversation that really the entire country has been having this summer about the proper role of police and the proper role of various police weapons and violent tactics and how they should be used against the community,” said Tuceck. “And I think it’s fair to say that at the ACLU, the broad position that we’ve taken not only here but throughout the country in different lawsuits has been that these sorts of tactics are inappropriate and should be curtailed.”

The six protesters included in the lawsuit have documented several injuries and injustices. One, Corbin Smith, said he and a companion, Tyler Weakley, were supporting peaceful protests from the sidelines on Broadway on May 31 when “without warning or justification,” LMPD deployed flashbangs and tear gas and started firing pepper balls and rubber bullets “indiscriminately.” Smith and Weakley tried to run back to their car, but were confronted by around 40 officers in riot gear. As Smith begged for him and Weakley to be let past, the officers trained their weapons on the pair, who knelt and raised their hands into the air. Smith said five officers charged and tackled him, slamming him to the ground. One officer placed his knee on Smith’s neck while the other four hit him with batons, inflicting cuts and bruises on his knees, legs and back. Four more officers pinned Weakly. They were arrested. Weakley was charged with one count of felony rioting and Smith with one count of misdemeanor unlawful assembly and another count of misdemeanor curfew violation.

“It was the second day of protests downtown, and after seeing what happened that night before, that Thursday evening, I wanted to show up to be in solidarity with my people, the folks that I represent in District 41 and people across Jefferson County,” she said. “I wanted to show up as a mom, I was there with my teenage daughter who wanted to be there. So I was showing up with her as a mom. So it was important for me to be there. And of course, justice for Breonna Taylor at the center of it all.”

Scott was at the protest for three hours and saw no violence until a small number of protesters threw water bottles at the police. They were quickly denounced by the crowd, according to the lawsuit.

Then, as Scott recorded the action, a police officer, identified in the lawsuit as J. Johnson, shoved her. She tripped on a box behind her and fell, injuring her knee. While receiving medical attention from a tent on site, she was exposed to tear gas, deployed by LMPD.

“I was like, ‘Wow, this just takes over your whole face,’” she told LEO. “Your sight, your sense of smell, your ability to even scream out for help.” Scott has returned to the protests at least twice a week since and has continued to only seen peaceful activity, save for some graffiti on sidewalks.

For some of the protesters represented in the lawsuit, the excessive force from the police has scared them away from joining the demonstrations again. This is part of the reason that officers’ tactics are a violation of the constitution, according to Tuceck. “In a democratic society, that’s not OK,” he said.

It’s too early in the lawsuit process to say what the plaintiff’s request for no crowd control weaponry on peaceful protesters would look like, Tuceck said. The attorneys involved, however, are not asking for police to stand on the sidelines if someone is at serious risk of bodily harm, he said. But, they also don’t want police to use “indiscriminate force,” or tactics that affect all protesters, peaceful or no, such as tear gas.

“What really I think we’d like to see the police doing, and what I believe their own standard operating procedures already call for is taking situations as they arise and using the minimum necessary amount of force to resolve it,” he said, “and in a lot of cases, employing dialogue and de-escalation tactics that don’t involve the use of force at all can be sufficient to diffuse most of these situations.” Scott said that she doesn’t want police to use any crowd control weaponry.

“It is inhumane,” she said. “I mean, there was at no point in time in the early days of the protests, including day two when my teenage daughter and I were tear gassed, were there any attempts at de-escalation by LMPD. We weren’t even warned that they were wanting us to disperse. We weren’t warned that they were about to use anything against us. Nothing. So we weren’t even treated as human beings with some kind of warning. And so I believe because it is the fault of LMPD to go to these weapons, they have to be banned. They have to stop using them.”

As a lawmaker, however, Scott knows there are other ways to make change. She personally plans to sponsor a bill called Breonna’s Law that would ban no knock warrants in the state. And, she supports a colleague’s idea for a bill that would end the use of chemical weapons, long-range acoustic devices and violence against peaceful protesters in Kentucky.