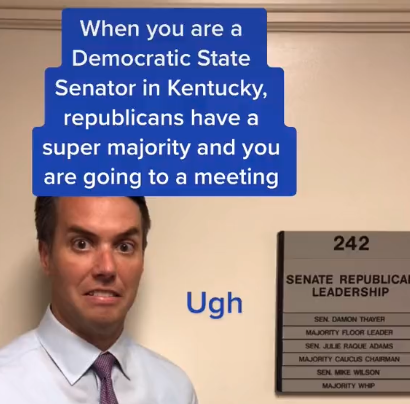 In case you haven’t been paying attention, Kentucky is a political hellscape where Republicans have a super majority so super in the state General Assembly, it’s been called a “super-duper majority.”

That means it’s almost impossible for Kentucky Democrats in the state Senate or House to pass legislation. And, it also means that ideas like raising the minimum wage, legalizing weed and passing any sort of gun reform are DOA each session.

That frustration is the main theme of the Kentucky Senate Democrats’ surprisingly popular TikTok account. The account, started in June, has over 28,000 followers and almost 1 million views on its first post alone.

It’s the brainchild of Senate minority intern, Piper Burke, according to media reports. But, its main on-camera star is Senate Minority Floor Leader Morgan McGarvey, who faces the frustration of being a blue pinprick in a sea of red actual-pricks with an eager smile and pained eyes. Sometimes, he’s joined by his downtrodden colleagues, including Sens. Gerald Neal and Reginald Thomas.

Here are some of the posts that are so accurate they hurt to watch.

@kysenatedemsInto the thick of it is right ##Kentucky ##kentuckysenate ##kentuckydems ##democrat ##statesenate ##statesenator♬ Into The Thick Of It! – The Backyardigans

2. The lip-syncing needs some work, but it hits nonetheless.

4. Sen. Gerald Neal has been on this struggle bus for 32 years.

9. But, to answer the question, Sen. McGarvey is married with three kids. So, simp respectfully.