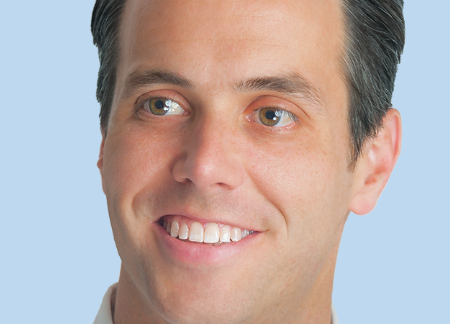 Well, that was fast.

Less than 10 minutes after Louisville Congressman John Yarmuth said he was not running for reelection, Kentucky’s Senate Minority Leader Morgan McGarvey announced that he would be launching a campaign to take the seat.

“With the news that our outstanding Congressman John Yarmuth is retiring, I’m excited to announce my bid for US Congress in #KY03!” he tweeted chirpily.

McGarvey, known for his Tik Tok presence, followed up his announcement with a donation link  minutes after, featuring a photo of himself with a campaign logo. We’ve got to give him props for his wicked fast graphic design skills. Unless…

You can help by pitching in here: https://t.co/GNPlOq6CMV

The page also highlights his record in the state legislature, including his fights  to preserve marriage equality, help victims of abuse and human trafficking and to promote clean energy. McGarvey was elected to the Senate in 2011.

The progressive stances he’s taking up are similar to the ones that state Rep. Attica Scott is championing. Scott announced she was running for Yarmuth’s seat when it wasn’t clear yet whether the veteran congressman would be pursuing another term. Scott has said that she also wants to legalize marijuana, although she’s gone the extra step with climate change and has expressed support for the Green New Deal.

Aaron Yarmuth, LEO’s former owner and John Yarmuth’s son, told the Courier Journal that he is considering running as well. And, John Yarmuth told the paper that he does not plan to endorse a candidate for his seat unless his son runs.

Rep. Scott released a statement about Yarmuth’s intention to retire soon after this news broke saying, “I said this when launching our campaign for Congress, no political seat belongs to any family member, front-runner, or legacy, and the people of Louisville deserve someone who will best fight for their needs in Washington. This is the people’s seat, and I am honored by the thousands of people who believe that another world is possible and who supported our campaign early on when we launched in July.”

We were curious about how Democrat Charles Booker is feeling, since he announced long ago that he would be running in a considerably tougher Congressional race against Sen. Rand Paul.

According to his Twitter, he’s taking the moment to send some love to Yarmuth, who he said showed him “what leadership can look like in the halls of Congress.”

Congressman Yarmuth gave me a chance. He believed in this young guy from the hood, and showed me what leadership can look like in the halls of Congress. Because of him, I found my own voice. As he announces his retirement, I want to take this moment to show him love. pic.twitter.com/WtTk1WeqK5