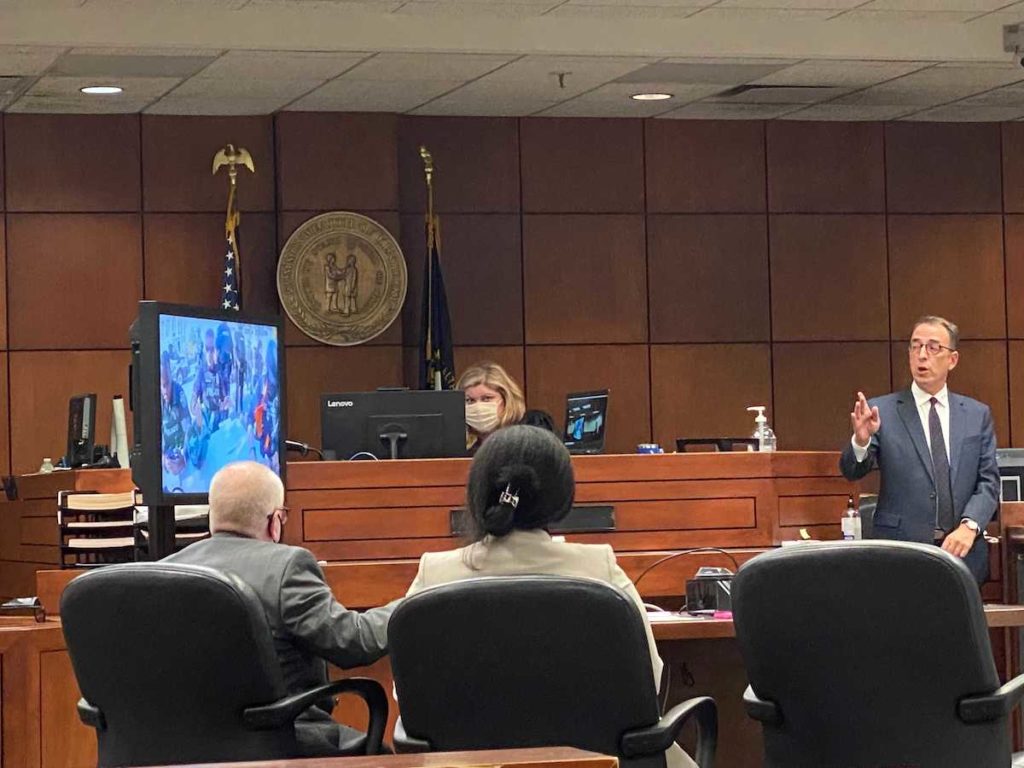 The County Attorney’s office said it was dropping charges because “there was relevant video evidence that was inadvertently not turned over” to the defense.

Barrow, who was one of 76 people arrested at a July 24, 2020 protest in NuLu, faced charges of obstructing a highway and unlawful assembly. Both charges carried a maximum penalty of up to 90 days in jail and a $250 fine.

Her trial opened on Monday with Matthew Kinney, staff attorney for the County Attorney’s office, saying that Barrow “along with others” had blocked off Market Street, infringing on the public’s “freedom” to travel the roads of Jefferson County while also keeping parents from picking up their kids at nearby schools, forcing ambulances to take circuitous routes to UofL Hospital and preventing the public from enjoying NuLu’s shops and restaurants on a summer afternoon.

On Monday, Barrow’s attorney Ted Shouse argued that police had manufactured a narrative about the actions of protesters and applied it to his client despite never seeing her engage in the activities described in her arrest citation.

In body camera video footage shown to the jury during Shouse’s opening statement, a police officer said he was creating a “generic narrative” for the arrest citations and said other officers should copy it.

Barrow’s arrest citation — which describes protesters barricading Market Street, ignoring dispersal orders and the protest resulting in local businesses calling 911 — was nearly identical to a citation seen by LEO Weekly for another person arrested at the same protest.

In his opening statement, Shouse said it was Barrow — not “faceless others” — on trial and that there was no evidence that she had engaged in the actions described in her arrest citation.

Speaking to reporters on Tuesday morning, Shouse said in the body camera footage he’s reviewed from July 24, all the arrests he’s seen — over 30 — were based on that same generic narrative.

Last week, the County Attorney’s office told LEO Weekly that out of about 900 protest-related arrests, nearly 600 cases had been dismissed. Of the remaining cases, 100 have been resolved while 200 are still unresolved.

Shouse said he hopes the dismissal of Barrow’s charges leads the County Attorney’s office to reevaluate the remaining cases.

“I would encourage the County Attorney’s office to take another hard look at these cases — all of these protest cases — and see exactly what evidence they have before they go forward,” he said.

In an email to local press, the County Attorney’s office said their remarks in the courtroom on Tuesday and their motion to dismiss would serve as their statements on the case.

Protest leader and mayoral candidate Shameka Parrish-Wright — who was arrested at a protest in September of last year and faced a felony rioting charge alongside misdemeanors before charges were dropped — welcomed the news as she pulled up in her car outside the Hall of Justice after the case was dismissed.

“After the opening statements yesterday, I said: ‘We shouldn’t even waste the taxpayers’ money on pursuing this,’” she said.  “We know that most of these protester cases should be dismissed. They cannot pin one thing that someone else did on everyone else.”