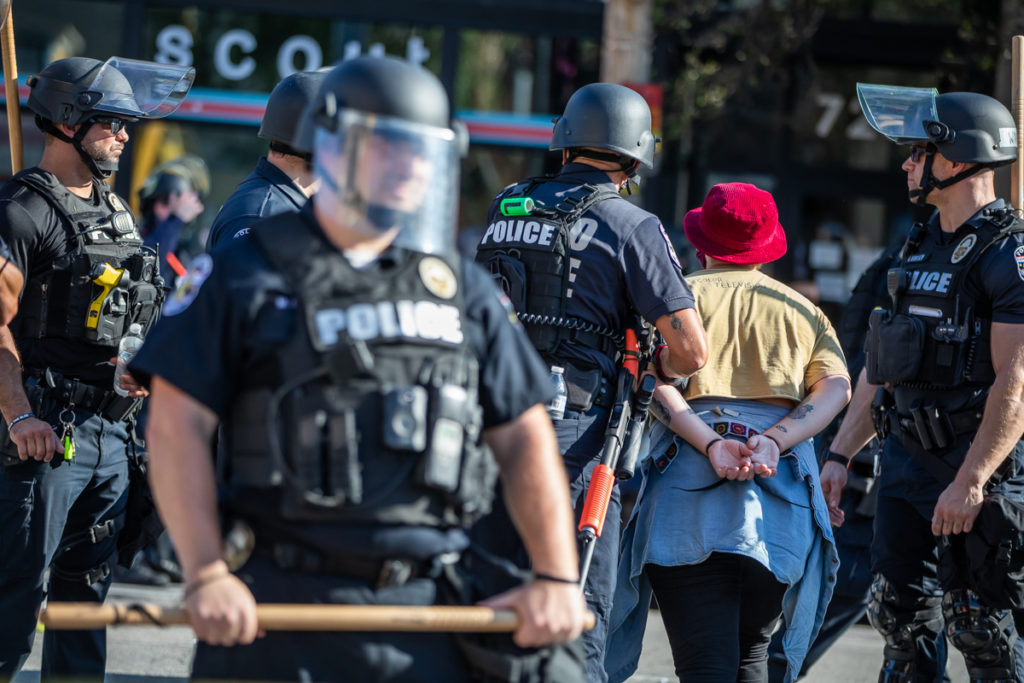 One of the protesters arrested during the Occupy NULU call to action in July of 2020.

More than 500 days since protests over the police killing of Breonna Taylor erupted in Louisville, the city will see the first jury trial of a person arrested on protest-related charges.

On Monday, a person arrested on misdemeanor charges of obstructing a highway, second degree disorderly conduct and unlawful assembly during a July 2020 protest in NuLu will be tried by jury in Jefferson County District Court. All three of those charges are class B misdemeanors, which carry a maximum penalty of 90 days in jail and a $250 fine.

While hundreds were arrested during months of protests in Louisville last year, most of those charges have been dropped.

Out of 900 protest-related arrests, the Jefferson County Attorney’s office says nearly 600 cases have been dismissed. Of the remaining cases, roughly 100 were otherwise resolved while 200 remain unresolved.

Representatives of the Jefferson County Attorney’s office declined to comment on why some protest cases were dismissed while others were not.

But in April, Geiser spoke to LEO Weekly about nonviolent protest offenses like blocking roadways, which she characterized as a public safety hazard.

“We’ve had some main thoroughfares blocked. It’s a safety concern,” she said. “I mean, there was one instance where one of the ramps, I believe it was 65, was blocked, down near the hospitals. And that ramp is regularly used by ambulances when they’re transporting people to the hospital. So we just can’t have that.”

On Monday, Shajuandi Barrow, 35, will be the first person tried on protest-related charges. Barrow was arrested on July 24 of last year during a protest in NuLu that saw protesters block off Market Street with barricades.

“Above subject was protesting in the 700 BLK of E Market. Several subjects made barricades out of bike racks, mattresses, fencing, and 55 gallon drums tied together w/ cables and zip ties,” reads Barrow’s arrest citation. “Several dispersal orders were given to disperse due to the unlawful assembly. This unlawful assembly caused alarm and annoyance to the businesses in the area. Several 911 calls were made due to the actions of the crowd.”

The citation noted that Barrow “states she was not in violation of [dispersal] order.”

The arrest citation reads nearly identically to that of another defendant in a protest-related trial listed on the Jefferson County District Court docket for next week.

The July 24, 2020 protest — branded Occupy NuLu — saw protesters block off Market Street as they called for justice in the police killing of Breonna Taylor and highlighted the lack of Black business representation in the heavily-gentrified NuLu district. A livestream of LMPD’s protest response broadcast by the police force on Facebook showed officers arriving at the corner of Clay and Market streets just before 5 p.m. Their arrival put an end to the mostly quiet scene as protesters quickly gathered to chant things like “We don’t see no riot here. Why are you in riot gear?” at the police. After multiple dispersal orders, LMPD officers could be seen kettling protesters inside the barricades and making arrests of protesters who did not leave the area.

A total of 76 protesters were arrested that day.

Ted Shouse, the attorney representing Barrow, said his client was “arrested alongside a number of other people” that day.

Asked how he thought the trial would go, Shouse said, “We’ll do our best.”

Arrests of protesters for nonviolent offenses in Louisville and across the country have been widely criticized by many as actions driven by desires to quell unrest and not public safety.

Heather Gatnarek, a staff attorney with ACLU Kentucky, said it was “striking” to see the protest arrests last year.

“We, along with many other people, were really concerned about the extent to which police were using criminal charges to press charges against protesters, oftentimes for protest activity that was not aggressive or violent,” she said. “I think it was telling that at a time when a large part of our community was coming out every day to protest police violence and police aggression against communities of color, we then saw at the end of the day, lists and lists of people who were being charged with criminal activities by those very police officers. It felt a bit like you could understand why people were protesting every day.”