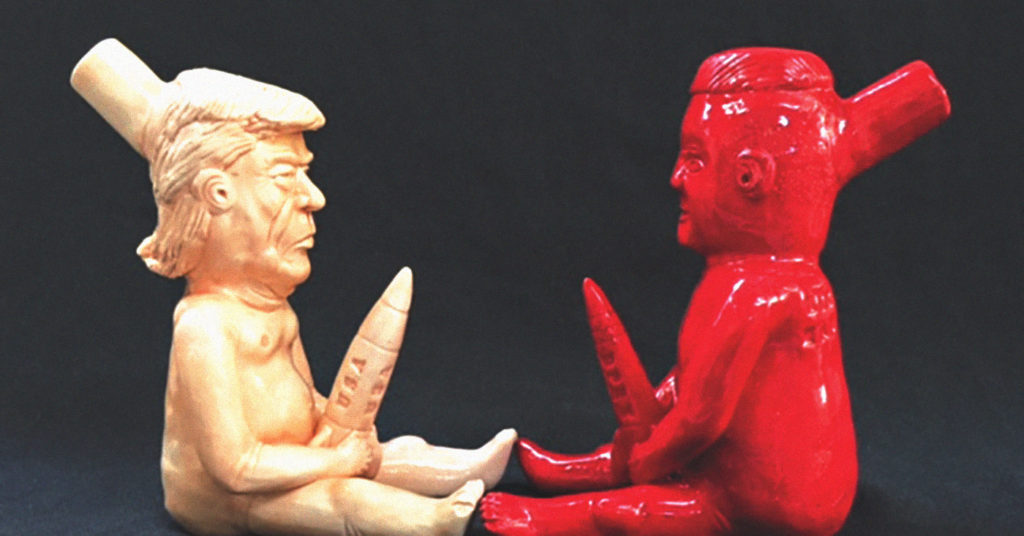 This article is part of our First Year of Tump package, which features stories about local protest art and music. Make sure to also read “Bevin’s Election Trumped Other Protest In Local Music” and “Four Local Musicians Break Down Their 2017 Protest Songs.”

‘We all need to be activists now’

Wayne Ferguson, the ceramicist, is not a complete stranger to liberal, Democratic political art, having spent the late ‘60s to mid-’80s reflecting the turmoil of the time in his art.

Donald Trump has pushed him back into it: “Right now I feel called to concentrate more on politics, but still create environmental statements regularly.

Regarding his “Trump Shot Glasses” series, he said he plans “on making one for each day he is in office. I pray that I don’t have to make more than 365 of these.”

Ferguson’s passion for political art might be best articulated by Pop sculptor Claes Oldenburg, who famously said, “I am for an art that is political-erotical-mystical, that does something more than sit on its ass in a museum.”

That expressive statement is how several Louisville museum curators, gallery owners and artists feel during the Trump administration. After his selection (I’m petty — I try not to say elected), protests started, with art used as focal point of the resistance.

Less than a month after Trump’s shocking win, garner narrative contemporary fine art (garnernarrative.com) put on “Yours in Struggle” (Dec. 2, 2016-Jan. 27, 2017). While activism was at its core (the phrase refers to solidarity and reassurance among protesters), Gallery Director Angie Reed Garner pointed out that not all the artists in the show considered the exhibition title to mean something political.

She hoped it would be healing.

“I know — because organizers have told me, again and again — that art protects against overwhelm and burnout,” she said. “We all need to be activists now, however we can. I believe we are the better off for the struggle. It is soul-killing to feel powerless, and it isn’t necessary. Even when we don’t win a fight, we still build for the future.” The show featured work by 10 local and regional artists including Garner, Tim Crowder, who created LEO’s cover and LEO’s managing editor, Keith Stone.

The exhibition closed on the day Trump signed an executive order to temporarily ban immigration from seven Muslim countries. Garner’s painting “Syria,” one of the banned countries, was still hanging on the gallery wall.

Trump’s inauguration was Jan. 20, 2017, followed the next day by the Women’s March, one of the largest demonstrations in U.S. history. There were millions of pussyhats in Washington, D.C. as well as across America and around the world. An icon was born, soon followed by its descendants, the #metoo and #TimesUp movements.

The Women’s March also gave birth to the exhibition “Still They Persist: Protest Art from the 2017 Women’s Marches” (stilltheypersist.com). Consisting of handmade posters, flags and clothing, it was curated by Calcagno Cullen, Maria Seda-Reeder, Jaime Thompson and Sara Vance Waddell, also known as the FemFour. The show was gleaned from Waddell’s collection.

The title came from Attorney General Jeff Sessions’ confirmation. U.S. Sen. Elizabeth Warren was reading a letter from Coretta Scott King about Sessions’ voting-rights when Senate Majority Leader Mitch McConnell tried to silence her. His explanation, “She was warned. Nevertheless, she persisted,” quickly became a meme and a motto.

The exhibition opened at the Wave Pool Gallery in Cincinnati on May 20; the Lexington Art League in Lexington, Kentucky, and Cincinnati’s Contemporary Arts Center soon followed.

One sign stated, “Make Empathy Great Again.” Others said, “Respect My Existence or Expect Resistance” and “Trust Black women because only 6 percent voted for Donald Trump but 53 percent of the White women did!”

A police shield was converted into a sign that proclaimed, “My Body, My Business.”

“Contemporary art is often used as a vital cultural tool for engaging with social change,” he said, “and the artists, activists and citizens that participated in the various marches over the past year were helping to promote critical dialogue about racial, gender and class disparity in this country.”

“Still They Persist” will be exhibited this year at Salisbury University in Salisbury, Maryland, from Jan. 22-March 16. In 2019, it will be at Pro Arts in Oakland, California, from Jan. 4-25. FemFour hopes to add more dates in the coming months.

Another protest show — “The Future is Female” — was at 21c Museum Hotel Louisville (21cmuseumhotels.com) from November 2016 to June 2017 (it is now at 21c Cincinnati through September 2018). While obviously a pro-woman exhibition, most of the art was not directly influenced by Trump’s policies. But “Champ” by Zoe Buckman was; it was created in response to Trump’s damning rhetoric on women’s reproduction rights and Planned Parenthood during his presidential campaign.

“Feminist artists have long lent a powerful voice to the cause for not only gender equality, but equity in many forms,” said 21c Chief Curator and Museum Director Alice Gray Stites, “so the exhibition addresses a range of injustices, from racial and sexual to ecological.”

Referencing “Champ” as “the only work that was created in direct response to current Republican policies,” Stites also feels “a few other works [in the exhibition] have resonated strongly as expressions of concern about or resistance to the Trump administration,” such as those created by internationally known artists Jenny Holzer and Carrie Mae Weems.

Now, back to Wayne Ferguson ([email protected]). There is no ambivalence in his art. Viewers definitely know what side of the political aisle this past recipient of the Kentucky Arts Council Al Smith Individual Artist Fellowship is on.

Ferguson’s favorite subjects/adversaries are Trump and McConnell. His pieces are satirical, as is their creator.

“I like the permanence of clay in that the objects I create might last into the future to be pondered by archaeologists wondering just who in the fuck we were and why we turned our planet into a contaminated cesspool unfit for animals or humans.”

May Ferguson go down in history for his ceramic bourbon bottles, shot glasses and sculptures of Trump, McConnell, missiles and cats.

While living during this time of Trump-Pence policies and personal beliefs, let’s commit to using “yours in the struggle” (or simply Y.I.T.S.) again. 2020 can’t come fast enough.

But till then, we’ll have great art. •