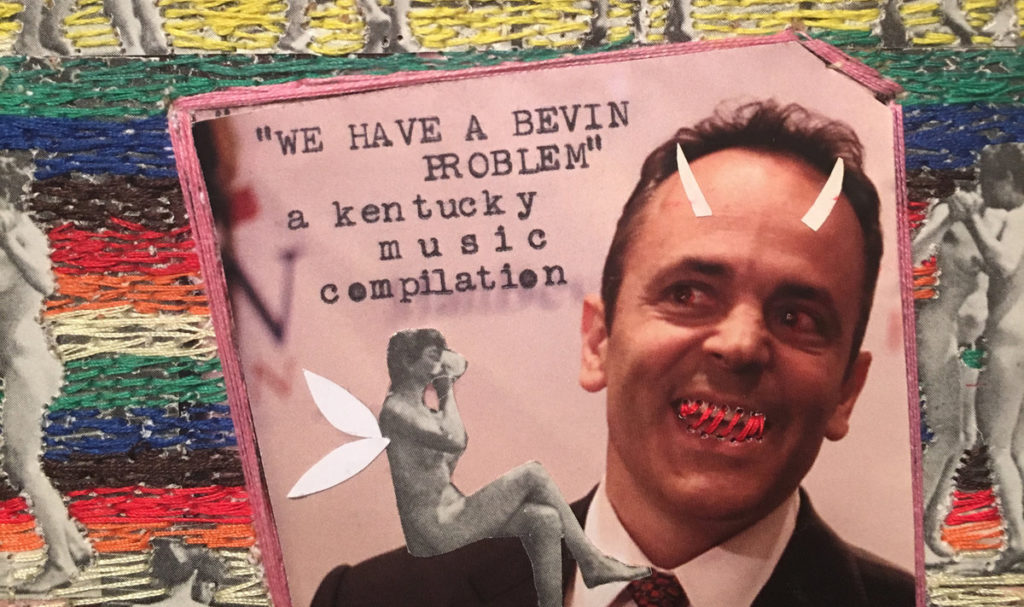 This article is part of our First Year of Tump package, which features stories about local protest art and music. Make sure to also read “The Power of Art, Wielded Against Trump, Inequity” and “Four Local Musicians Break Down Their 2017 Protest Songs.”

Governor a more direct threat to us than Trump?

“When the end of the world comes, I want to be in Kentucky, because everything there happens 20 years after it happens anywhere else,” opined Mark Twain, the American humorist known for having dropped the original diss track.

But Kentucky recently found itself ahead of the rest of the country in one respect, however — embracing the rise of new populism.

That new populism came to Kentucky in 2015 with the election of a Northern-born, tea party-backed business mogul rejected by the GOP establishment who yells at reporters, brandishes nicknames for his enemies, repeals well-liked programs and blocks critics on social media. He ended up beating a party-anointed candidate who did not engender much enthusiasm within the Democratic base.

Sounds like Donald Trump, of course. But it’s our current governor, Matt Bevin.

For this reason, perhaps, protest in Louisville-area arts in Trump’s first year in office has been less about him than it has been about Bevin and the broader ideas of the nativism, tribalism and, some would say, social regression.

Only a handful political songs — overtly or suggestively, worldly or personal — came out of the Louisville scene last year, most of them from hip-hop artists. By the time Trump took office Jan. 20, 2017, many had already said their peace a year prior, with a wretched preview of things to come from a Bevin administration.

For example, in the summer of 2016, an array of local artists and musicians came together — some under pseudonyms, others under their real names or public nom de plume — to create We Have a Bevin Problem, possibly the largest and most-eclectic document of acute protest art to come out of Louisville. The massive 44-song compilation from artists across genres and generations was mixed at the renowned La La Land Studios and all proceeds from the digital album benefited Planned Parenthood.

“Living in Kentucky has really given us a double dose of heartless, self-serving, power-seeking demagogues,” said the compilation organizer, who asked to remain anonymous because “the idea was supposed to be about the collective and not a single person.”

“We wanted the compilation to present one unified voice of resistance to Bevin’s policies, which we felt were mean-spirited, unjust, and hindered progress in Kentucky, especially when it came to women’s reproductive rights,” she said.

Andrew Rinehart, who contributed a song, “Hey Bevin,” said, “I wanted to very vocally express my total lack of sympathy for Matt Bevin’s ideas and policies on pretty much anything and everything.”

Tyler Gill, a local country (!) artist penned the over-five-minute hypocrisy anthem “So Called Christian Politician.” “Matt Bevin and his policies are a real danger to the lives of many people across the state, and we have to hold him accountable,” he said. Gill has been writing music for awhile, but volunteering a song for the compilation encouraged him to put a formal band together. He’s now working on an album that will include his protest song, and plans to hand deliver it to the state Capitol.

“Hopefully I get a chance to talk to him and tell him what an inspiration he’s been,” Gill said.

The parallels between Bevin and Trump are striking. But as political experts, a group both Trump and Bevin consider a bête noire, have pointed out, there’s one important difference. “He’s more in control,” Courier Journal’s Metro Columnist Joe Gerth told FiveThirtyEight. “He isn’t prone to Saturday-morning tweet storms. You can see an end game.”

All politics are local, a phrase attributed to former U.S. House Speaker Tip O’Neill. And local politics are much more visceral and direct.

Gill said, “Trump is a threat in so many potentially devastating ways — maybe causing a nuclear holocaust via a poorly-crafted tweet.”

“As terrifying as that is, lots of big and immediate change happens on the state and local level. Important things that affect millions of real people, like Medicaid for example — these issues are in the hands of our state representatives and our governor. It becomes easy to overlook what’s going on in Frankfort when D.C. is an all-out shit show.”

Kentucky is a peculiar place — serving as a bellwether for the presidential election for four decades with Democratic state leadership in both houses for the vast majority of the 20th century (albeit with Kentucky’s curious form of Democratic policy). This pivoted around the 21st century with the slow death of labor and coal, obliterating the “blue belt” of reliably Democratic counties in the eastern part of the state. The blue oases of big city Louisville and college towns of Lexington and Bowling Green couldn’t counterbalance the state’s relatively-large white population to keep the Commonwealth unequivocally red. Even Elliott County, once considered the most reliably Democratic county in the country for 144 years, eventually flipped. Still, Kentucky twice elected a governor who embraced Obamacare and helped engineer arguably the most successful implementation of an ACA marketplace in the nation, slashing the uninsured rate in half and enrolling 10 percent of the population in Medicaid.

Then, the conservative wave came, different from the moral or silent majority, to clinch power in Kentucky. It’s hard to predict exactly how the new federal tax bill will affect Kentuckians. But the dismantling of the popular, high-functioning Kynect program was felt immediately, with new enrollment procedures at the outset and, in many cases, higher premiums. The closing of Lexington’s women’s health clinic in January 2017 is a tangible result of Bevin governance, as is the attack on Louisville’s EMW Women’s Surgical Center — the last remaining option in the state to get an abortion. Trump’s Twitter buffoonery and soup-like brain is a source of amusement and concern, but Bevin’s agenda and acute ability to act on policy is immediate and material. Per many insider accounts, Trump is the avatar of poor governance and lip service. Per many Kentuckians, Bevin is an existential threat.

As such, while thousands turned up for the Women’s March last year coinciding with the national movement on Trump’s inauguration, Louisville’s response to this new climate isn’t as much about the ethereal incompetence and authoritarian tendencies of a Trump administration as much as speaking out against the very real treachery already precipitating under Bevin.

It’s one that continued on social media, in art, and in the streets on a regular basis in 2017. And it won’t lose any steam rolling into the new year. •