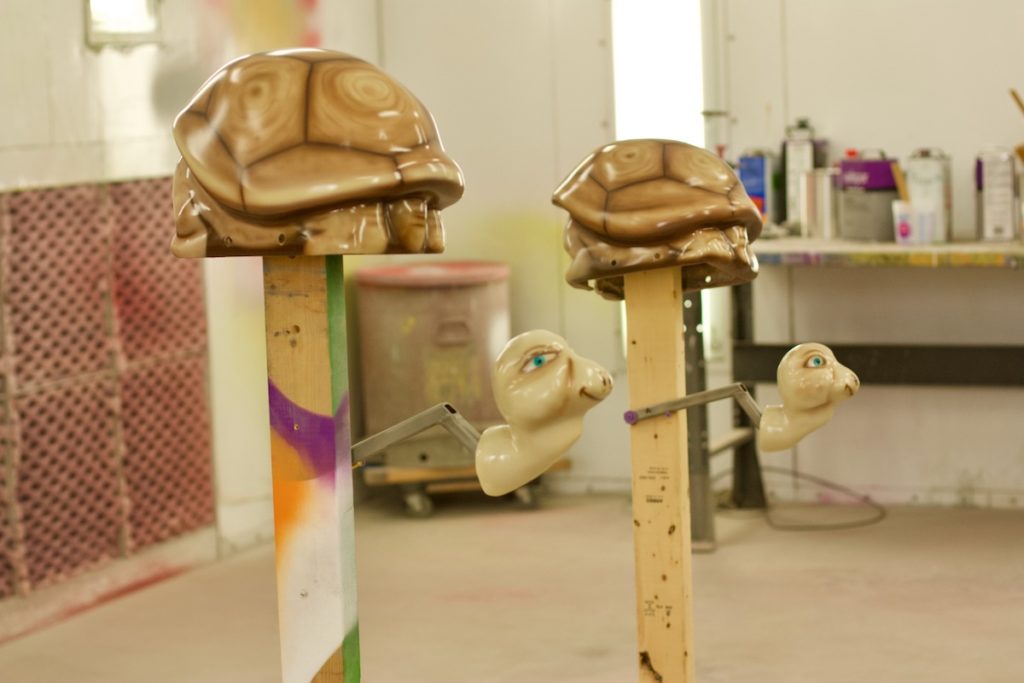 Some of the fanciful characters The Weber Group is working currently.Photo by Erica Rucker

Weber Group, a local creative fabrication company is working with the Portland Museum on the realization of its AHOY! Immersive experience, and in honor of that partnership, Portland Museum is hosting a show paying homage to the Webers’ work and legacy.

The show, titled:  “I Bet We Can Build That:” Weber Group Past, Present, and Future,” opens Sunday, May 22 at the Portland Museum. The press release for the show mentions the brothers finding inspiration in a Christmas display, and exclaiming, “I bet we can build that.”

Weber Group has spent many years making magic a reality; from theme parks to hotels, and many of us have no idea that the dream all started with these two brothers in the West End of Louisville.

“I grew up one block away from Fontaine Ferry Park, and Fontaine Ferry Park was at the foot of market street at Northwestern Parkway,” said Donny Weber when we spoke at their offices a few weeks ago. Side note: If you’re from Louisville, you know that Fontaine is pronounced “Fountain” here.

The brothers Tom and Donny Weber were born in the Shawnee Park area of Louisville in the 1940s. The Parkway was and still is lined with lovely and stately homes. They attended Flaget High School with other notable Louisvillians, Paul Hornung and Howard Schnellenberger. After graduating, the brothers went to UK to study architecture. When they finished college, and worked a few different jobs, Donny in carpentry and Tom in construction, a couple of friends who were working in banking helped them with their first business plan and were early investors in their dream.

“We always wanted to do design build. We were both working for nonprofits at the time. I was working for the Preservation Alliance in Louisville, Jefferson County. And Tom was working for a housing corporation called New Directions,” said Donny Weber. “I’d been in business with a couple of buddies. We did carpentry.

“We had two friends that were bankers, one mortgage banker and one fellow who worked for a local bank that encouraged us to do it, helped us put together a business plan and actually invested in the company briefly until we got on our feet. So we started out pretty traditional.”
Then came a fateful introduction to the new owner of Kentucky Kingdom.

“There was a local entrepreneur developer who wanted to reopen it and to develop it, and he was looking for design and construction help,” Weber said. “We actually sold our company to the development group and became the in-house design, build company for the development of the park and took it from like 12 acres, I think, to about 64/65…

“When that individual sold Kentucky Kingdom, they didn’t need the in-house service, because they didn’t. So Tom and I went back out on our own again as Weber group and had contacts with all the major theme park operators.”

It was during this conversation when I looked above the conference table and noticed the light fixture, which was a large branch with strategically-placed, flashing and giant lightning bugs (I mistakenly called them roaches to which the room erupted in laughter.) This was the perfect example of the types of fun projects Weber Group would become involved in from then forward.
All the while they were creating the fanciful characters for places like Kentucky Kingdom, the Troll Pub, the Louisville Zoo, Churchill Downs, etc., the company secured their money with their ability to be a fully-equipped commercial construction company.

Weber group has been recognized nationally for their work on the Children’s Museum of Indianapolis, Great Wolf Lodge, Kennedy Space Center and the Outdoor Adventure Center in Detroit amongst many other projects with the immersive element. It was this and the connection to the West End that brought the Portland Museum back to Weber Group. The group had actually done work in 1989 for the museum so this reunion felt serendipitous to both.

“AHOY is a state of mind that our young visitors will take home with them to affect the rest of their everyday lives,” said AHOY! Committee member and retired Home of the Innocents CEO Gordon Brown said in a release.

Portland Museum’s Executive Director Katy Delahanty lives in Portland, and she’s excited that the museum gets to work with people who also spent time in the area to help bring AHOY! to life.

“The Portland Museum and Weber Group first worked together in 1989, and thirty years later, we are reconnecting with Weber Group and bringing them back to Louisville’s West End, where it all once began,” Delhanty said in an email. “Danny and I dreamed of bringing Louisville’s first real children’s immersive space to the West End, and we believe Weber Group is a storybook match for our AHOY project.“

Though Weber Group operates from Sellersberg in Southern Indiana, the Louisville roots are still important to the group, and their mark can be seen and felt around the city.

Tom Weber passed away about six years ago, Donny tells us, but his presence is still felt throughout the company. As we walked around the offices and warehouses while talking about their many projects including AHOY!, there were statues of Tom and mustaches everywhere. All of these small reminders of the legacy he left Weber group.

See the  “I Bet We Can Build That: Weber Group Past, Present, and Future” opening this Sunday, May 22 at the Portland Museum and running through September.