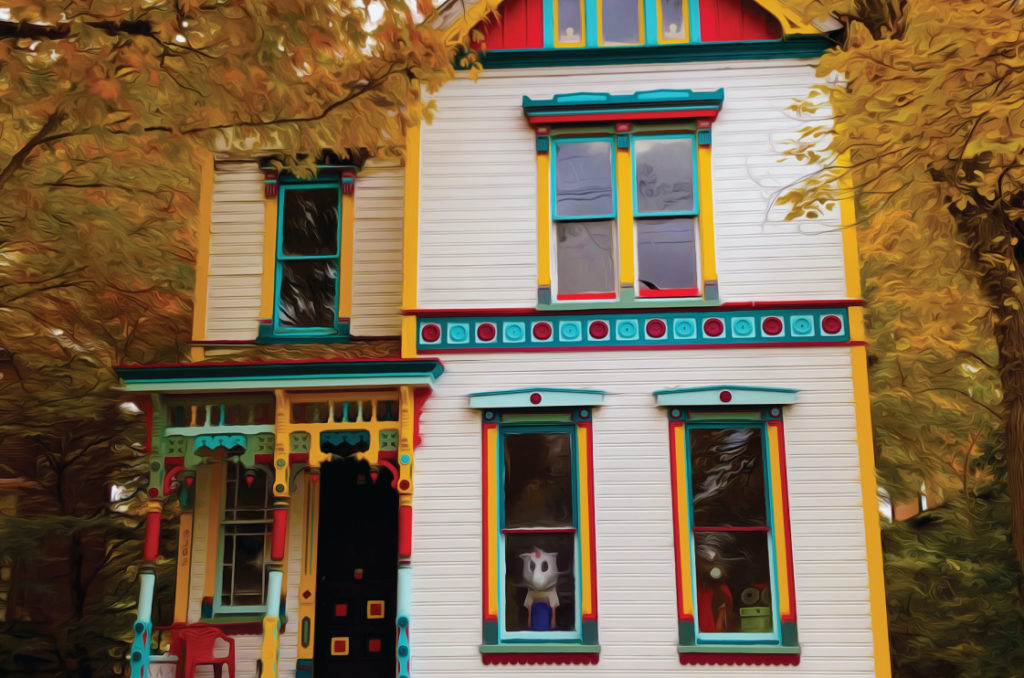 According to legend and the Oxford English Dictionary, how we greet each other in the English speaking world — with the word, “hello” — was a matter of happenstance. Apparently, Thomas Edison answered the first phone call with “hello,” although Alexander Graham Bell preferred, “Ahoy,” a greeting that had been around at least 100 years longer.

Ahoy was a greeting familiar to most and used particularly amongst the nautical set. In Louisville, a similar set of nautical folk — those traveling the Ohio River — put down roots in what we now call Portland and began to grow a community that grew a city. Now, the Portland Museum has launched a new project that pays homage to the riverine beginnings of the neighborhood, one that addresses a dire need in the neighborhood: children with nothing to do.

AHOY [Adventure House of You] is a project of the Portland Museum that has taken solid first steps toward opening an immersive, experiential children’s space. They have secured a Victorian property adjacent to the museum and are beginning the process of building stabilization.

In recent years, Portland has experienced renewed attention from investors, particularly Gill Holland, and the process to revitalize the area has been slow. Children’s activities have been the slowest to arrive. AHOY represents a move toward a remedy.

Danny Seim, the Executive Director of the Portland Museum and Katy Delahanty, chair of the AHOY committee, are hesitant to call the project a “children’s museum.”

“We’re looking for the perfect title,” said Seim. “We want to make sure that this is going to be an experience more than a place to learn about gravity and typical educational stuff.”

The project takes inspiration from other experiential “museums” like the St. Louis City Museum and the now-infamous art experience Meow Wolf, which has gained international attention and received sponsorship from popular figures like George R.R. Martin of “Game of Thrones” fame.

Delahanty adds, “It’s ever-evolving and this is the time when we’re seeking input from children, so it’s not just adults deciding what should be in the space.”

Fellow AHOY board member and Former Home of the Innocents CEO, Gordon Brown wants kids in Portland to have a big voice in the project. His suggestion, to Seim and Delahanty, is that the kids who live in Portland become the ambassadors and docents of AHOY.

It’s important to the whole project that the hands that build, create or guide are locals in the neighborhood. Both Delahanty and Seim live in Portland. As much as possible, they are trying to involve other neighborhood people, including builder Ryan Stoess, whose family owns The Table restaurant on Portland Avenue.

Recently, the project added a totem-style sculpture by local artist Joe Autry. Autry’s work can be seen in many places in Louisville and Southern Indiana, but Autry’s roots are in Portland, so this piece brought him back and apparently, attracted a fair amount of interesting attention.

“He got people [interested] like the Louisville Outlaws Motorcycle Club and people who wouldn’t typically — for whatever reason — set foot in the museum,” said Seim, sharing that Autry spent two months in front of the buildings with a chainsaw in hand, creating the sculpture, which captures the image of the first female steamboat captain, Mary M. Miller. Miller was born and when she wasn’t working on her boat, lived in the Portland neighborhood. Autry used a painting of Miller by Delahanty as inspiration for the piece.

“A lot of people would stop because they’d see a dude out there with a chainsaw,” said Seim. “Joe’s a great diplomat. He’s been out there talking as much as he was making art.”

Autry himself found the project profound. “I met my whole father’s side of the family that I had not met,” Autry said, describing the experience as overwhelming with emotions.

“It set the scene for me to be able to time travel to when Portland was a more industrious place,” he says, hinting at the struggle Portland has with persistent poverty and neglect.

The AHOY Project isn’t the first attempt at a children’s museum in Louisville. Going on 10 years now, The Louisville Children’s Museum has been building interest in an educational children’s focused space. Co-founder Emily Burrice, who’s from Chicago and moved here with her husband and three children from Indianapolis, lamented that the museum-type opportunities for her children were lacking.

“Louisville doesn’t have a traditional children’s museum,” she said. So she started talking to anyone who would listen.

“In the first two years, we had over 90 meetings with anyone in a leadership role.”

The Louisville Children’s museum moved forward with programming from a mobile museum format. They base their experiences around Kentucky history and arts. In the years before the pandemic, they traveled to local schools with their museum.

In 2020, Burrice says, “We were on track to have our biggest year yet when COVID hit.”

This forced them to offer their programming online. Likewise, the Portland museum has had to adapt the way it connects to its public and taking the initiative to work on AHOY for the post-pandemic world is part of that.

“We will be attempting to raise about $1.5 to two million dollars for the project,” said Delahanty.

Seim agreed, “We’re trying to keep things tangible and attainable,” citing other projects that request hundreds of millions in a shaky economic climate.

AHOY will be moving into more future planning soon. This will include creating a new budget that will include the full build-out of the house and grounds, which will offer an adventure style, “risky play” area.

“We have all this letterpress equipment and tactile stuff for kids to really enjoy,” said Delahanty. “Those machines kind of bridge history, fun and art at the same time.”

Portland has a rich history, both as one of the oldest neighborhoods in the city of Louisville, and as a diverse area with many stories to tell and gifts to share. The AHOY project seeks to add fun and a child-friendly reason for people to travel beyond the storied Ninth Street divide.