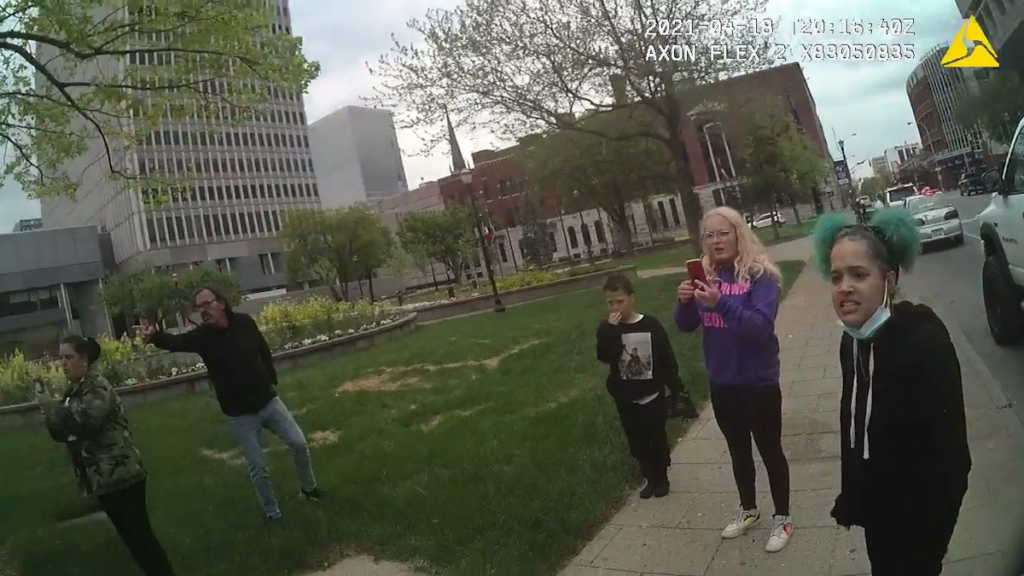 To the police officers involved in the operation to arrest Denorver “Dee” Garrett, downtown Louisville’s Jefferson Square Park was growing more dangerous by the second on April 18, 2021.

Officer Curtis Calhoun kept his eyes on the protesters, believing that turning to glance at the commotion from the arrest going on behind him could leave him vulnerable to attack.

Sgt. Christina Beaven was afraid of the protesters jumping on the backs of arresting officers because, “that happens quite often when we try to arrest somebody.”

Sgt. Lisa Nagle focused her attention on a woman filming the arrest while buckled into the driver’s seat of a car, wanting to make sure she “didn’t get out of the car or do anything to harm the officers.”

And Officer Aaron Ambers, who repeatedly punched Garrett in the face during the arrest, said he did not use his taser because he was afraid it would fall into the hands of the crowd, which could turn the arrest into a situation where officers would have to use lethal force.

But body camera footage released by the Louisville Metro Police Department last week stands in juxtaposition to the image of a dangerous, seething crowd on the precipice of violence.

The crowd officers were worried about was composed of a well-known 60-year-old Louisville lawyer, his 15-year-old daughter, a small boy no older than ten, a young woman and a middle-aged woman who is identified as her mother. Another woman is sitting in a car parked at the curb, filming on her phone as Ambers punches Garrett in the face on the sidewalk.

The scene was also a sharp contrast to the height of protests in 2020, when hundreds — and sometimes thousands — of protesters would fill the square and the surrounding streets calling for justice in the police killing of Breonna Taylor.

Some of the people seen in the body camera footage are shouting and cursing as they demand that Ambers stop punching Garrett, but the situation does not look like an ambush.

“That whole narrative is just absolutely bullshit. It’s just totally ridiculous,” said David Mour, the lawyer who witnessed the arrest, after LEO Weekly read him excerpts from officer interviews with investigators that presented civilians witnessing the arrest as potential threats.

The body camera footage and the investigator interviews with officers were part of the Louisville Metro Police Department investigation released last week which exonerated Ambers and Nagle of potential breaches of policy during the arrest of Garrett in April of last year.

On the afternoon of April 18, 2021, officers convened at LMPD’s downtown precinct at 2nd and Jefferson and drove to Jefferson Square Park in at least eight patrol cars with the intention of arresting Garrett, who had been observed standing in the street with a large cross. When officers arrived, Garrett was no longer in the street, but was instead speaking with a woman parked in a car pulled up at the curb. It was a quiet day, with just a handful of people in the square. Police decided to go forward with the arrest, approaching Garrett and telling him he was under arrest. Arresting officers then accused Garret of “flexing” and preventing them from getting handcuffs on him. As some officers provided security, others brought him to the ground. While Garrett was on the ground, Ambers struck him in the face at least four times with a closed fist, saying he was resisting arrest by refusing to put his hands behind his back and trying to stand up.

Garrett was charged with disorderly conduct and resisting arrest, but those chargers were later dropped.

Experts on policing who spoke to LEO Weekly said the perception of the small crowd as a threat was unsurprising, part of a lens through which police nationwide largely view every interaction as potentially deadly. Reinforced by training, such views can justify the use of force and lead to over reaction, experts told LEO.

“When I hear these accounts of, ‘We were worried about the crowd, it was a really combative crowd,’ I think that is a product of how officers are taught to understand their place in relation to the public, that the public is a source of threat, that police are disliked, that police must be on guard at all times to protect their lives,” said Michael Sierra-Arévalo, an assistant sociology professor at the University of Texas at Austin whose work has focused on police officer culture and who has spent 1,000 hours with police officers doing research. “It is not really surprising to me that they would describe a couple of people recording them and shouting at them as potentially a lethal force encounter in the making.”

While Ambers and Nagle were exonerated, police chief Erika Shields wrote that “officers could have made better decisions” and that the decision to move in and arrest Garrett even though he was off the street “albeit legal, was not reflective of the extensive de-escalation training the department has received.”

Officers, Shields wrote, “accomplished nothing other than to play into the hands of an attention-seeking individual, who has a documented history of violence and is a registered sex offender.”

Despite the exoneration, Mour, the attorney who saw the arrest and represents Garrett, said he would be “very shocked” if there are no federal charges brought against Ambers.

“The scene you’re describing, in my words, would be at the minimum overkill if not extreme overkill,” said Peter Kraska, a criminology professor at Eastern Kentucky University who is an expert on police militarization, after LEO summarized the report and described body camera footage to him. “And it sounds like a situation where they came up with post hoc reasoning, not based on what was actually happening at the scene, but after the fact, to justify what they did.”

While the police department’s investigation found that the punches that Ambers threw were allowed under the force’s standard operating procedures as the department determined that Garrett was resisting arrest, Ambers’ interview with investigators shows that his perception of the crowd that day colored his decision to use force.

“My fear was that he was gonna start fighting up. And I thought that he was buying time for us to get surrounded by the crowd,” Ambers said of the moments leading up to the punches.

Asked by investigators if he felt the use of force on Garret was necessary, he said, “the park was becoming — the situation… was becoming more dangerous by the moment. Ah, we needed to make a quick, safe arrest.”

Later, Ambers was asked if he considered using a taser to gain compliance from Garrett. He said he feared that the crowd would seize the taser and force police to use deadly force.

“If I was disarmed of that [taser] and he has allies and we’re all surrounded, now I’m potentially introducing a weapon that it — it could turn into a lethal force scenario if one of them was to pick it up and try to use it on us,” he said. “I didn’t consider introducing it for that — for that reason.”

Ambers was not alone in his fears of the crowd.

Officer Calhoun described moving in front of Mour, the attorney, fearing that the crowd was about to charge.

Calhoun explained that officers “had a history of either the group attacking the primary security or they throw things.”

Sgt. Nagle said she saw the first strike on Garrett, but then diverted her attention to the woman filming from the car to make sure “she didn’t have a weapon” and didn’t “do anything to harm officers.”

She told investigators that the plan was to have four officers arrest Garrett while the others did security because “once we show up at the park, that park, ah, population can grow quickly. And usually, they become very aggressive. Um, we’ve had them jump on officers’ backs before.”

Responding to a request for comment about how officers viewed onlookers and whether the department believed the presence or actions of onlookers impacted events, an LMPD spokesperson said: “We believe the investigative file, including Chief Shields’ memo to the file, captures all relevant considerations.”

Alex Vitale, a professor of sociology at Brooklyn College and the author of “The End of Policing,” said that facing protesters, police can have “a genuine misperception of threat because of preconceived ideas among the officers that equate demonstrations critical of policing with a fundamental threat to law and order, when really what people are doing is holding up signs on the sidewalk.”

Sierra-Arévalo, the University of Texas at Austin professor, said officers are “socialized” to view everything as a threat.

“Officers are socialized to understand that any interaction is one which could devolve into catastrophe at any moment,” he said. “And so when I read accounts of officers saying things like ‘somebody could have grabbed my taser and that could have meant I needed to use deadly force,’ that is squarely in line with how they are trained and with how their policies are written.”

LMPD officers on scene viewed Garrett as a threat as well.

Ambers said before the raid, officers had been “briefed that [Garrett] was one of the, a, regular protesters, rioters in the park; um, that he was an agitator, um, and he was gonna be aggressive.”

That perception influenced the decision to have so many officers involved in the arrest.

According to interviews with investigators, officers said they feared that after he was taken to the ground, Garrett’s attempts to get up were a prelude to him attempting to either flee or fight with officers. Those fears, Ambers said, were exacerbated when Garrett was on the ground with one handcuff bracelet locked onto his left wrist.

“He’s got the handcuffs on his wrist. He’s got a weapon,” said Ambers, adding that he feared Garrett would strike officers or others in the area with the metal handcuffs.

Sierra-Arévalo, who reviewed investigation documents and body camera footage shared by LEO, saw the accusations of Garrett being armed as further after-the-fact justification and said that police policy turned “perfectly reasonable, automatic” responses like trying to get away from punches into a “clear justification” for further use of force.

“What I think this case shows, quite clearly, is that the leeway that is enshrined in policy and law for officers to retroactively explain, justify and normalize their violence is very wide,” he said.