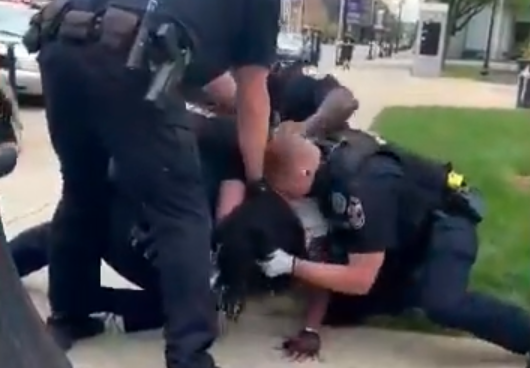 Footage from an onlooker shows Dee Garrett being arrested by Louisville police.Screenshot via LMPD

A Professional Standards Unit investigation has cleared a Louisville officer who was caught on film repeatedly hitting a protester while arresting him.

Officer Aaron Ambers was one of several officers who were involved in arresting Denorver “Dee” Garrett for standing in a roadway near Jefferson Square Park on April 18, 2021 while protesting. The charges against Garrett were eventually dropped.

In the incident, caught on camera, the officers force Garrett to the ground after he has already moved to the sidewalk. While in that position, Officer Ambers is seen punching Garrett in the head with onlookers saying, “Stop hitting him.”

In a letter contained in the PSU files, Chief Erika Shields says that while officers should have engaged in de-escalation tactics and “made better decisions,” Ambers’ actions were found by investigators to ultimately be in compliance with LMPD’s use of force policy.

The letter says that body camera footage shows that Garrett was actively resisting the arrest and that officers initiated a takedown maneuver in order to gain some leverage.

In a statement, Officer Ambers said that he hit Garrett in order to get the protester to release his hand, so he could be handcuffed. Ambers said he was concerned that Garrett had not been searched for weapons prior to the takedown.

Shields does write that, ultimately, the officers “accomplished nothing other than to play into the hands of an attention-seeking individual, who has a documented history of violence and is a registered sex offender.”

Her letter also contains recommendations for actions to be taken in light of the finished investigation, including alterations to LMPD’s de-escalation and use of force policies: