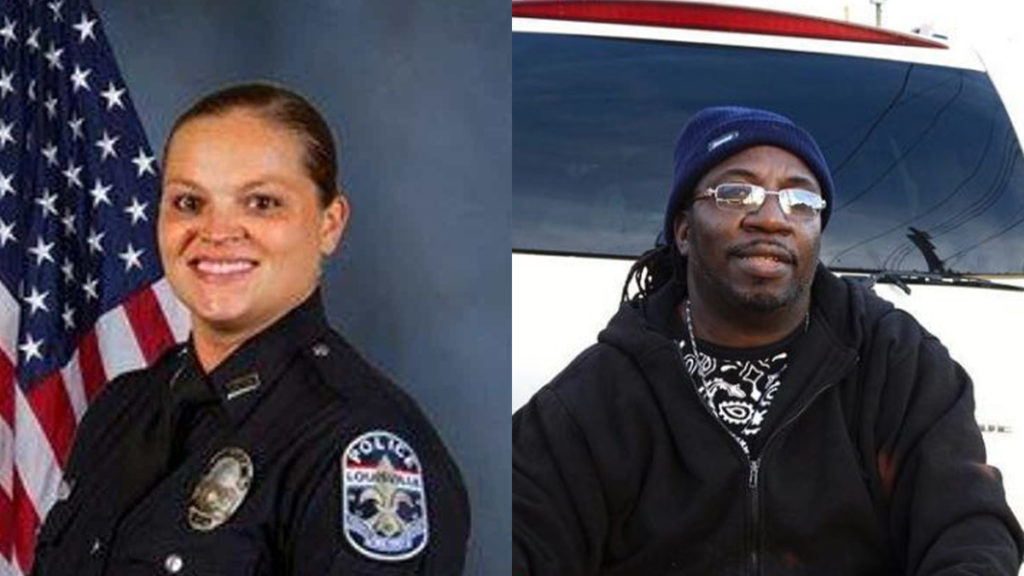 Ex-LMPD officer Katie Crews was fired partially because of her actions on the night of David McAtee's death.

In a Feb. 7 letter firing former Louisville Metro Police Department officer Katie Crews, Chief Erika Shields wrote that Crews’ actions on the night BBQ chef David McAtee was killed and a Facebook post that boasted about shooting a protester with pepper balls “severely damaged the image” of the department and could not be tolerated.

“Your conduct has severely damaged the image of our Department we have established with our community,” Shields wrote. “The result of your actions seriously impedes the Department’s goal of providing the citizens of our city with the most professional law enforcement agency possible. I cannot tolerate this type of conduct by any member of the Louisville Metro Police Department.”

According to the letter from last month, two separate Professional Standards Unit investigations — one into a Facebook post in which Crews gloated about shooting pepper balls at a protester and another into events during the incident resulted in the death of McAtee — found a total of five breaches of LMPD policy. The letter also says an investigation exonerated Crews of a potential breach of LMPD’s use of deadly force policy in the incident that killed McAtee.

LEO Weekly obtained the letter through an open records request.

Last week, Crews was federally indicted for using unreasonable force on June 1, 2020 when she fired her pepper ball gun at an individual who “was standing on private property and not posing a threat to the defendant or others.” If convicted, she faces a maximum sentence of 10 years in prison.

The June 1, 2020 incident occurred as LMPD officers moved into the intersection of 26th and Broadway in Louisville’s predominantly Black West End to enforce a 9 p.m. city-wide curfew alongside National Guard troops. The location was miles away from the center of the protests in downtown Louisville, and there were no protests there at the time police and National Guard troops arrived.

After pepper balls were fired, people began fleeing into McAtee’s small, but popular BBQ restaurant. As people sought safety in his restaurant, McAtee stepped into his doorway, raised his arm and appeared to fire two shots. Crews, another LMPD officer and two National Guard troops fired in response. An investigation determined that it was a shot from a National Guard soldier’s rifle that killed McAtee. His family and their attorney have said McAtee, who was known for giving out free food to police, would never knowingly fire at police officers and was firing warning shots.

Shields’ letter echoed last week’s federal indictment, saying that Crews violated LMPD’s use of chemical agents policy when she “used pepper balls to disperse a large crowd that was not disorderly nor aggressive.” Shields also said that Crews directed fire at an individual who posed no threat and was standing in the doorway of a private business — and that the 9 p.m. curfew ordered by Mayor Greg Fischer did not apply to private property.

Shields said Crews also violated LMPD’s policy on de-escalation by failing “to provide individuals the opportunity to respond to your commands to disperse” before she started firing.  The third violation from the incident, Shields wrote, was Crews’ failure to turn on her body camera and later failure to fill out a report about not turning on her body camera.

A second investigation dealt with a Facebook post from the first days of the Breonna Taylor protests in which Crews boasted about shooting protesters with pepper balls.

Widely circulated screenshots at the time showed Crews posting a Courier Journal picture of a white protester offering Crews flowers as she stood amid a line of officers in riot gear.

“She was saying and doing a lot more than ‘offering flowers’ to me,” Crews wrote. “Just so for it to be known. For anyone that knows me and knows that my facial expression tells everything. P.S I hope the pepper balls that she got lit up with a little later on hurt…Come back and get ya some more ole girl, I’ll be on the line again tonight.”

In the termination letter, Shields wrote that Crews’ post violated an LMPD social media policy as the statement “could be construed as promoting violence.”

Both investigations were launched by interim Chief Robert Schroeder in June 2020.

In an interview last year, Shields said she expected federal charges related to events surrounding the killing of David McAtee, saying that the firing of pepper balls “really jump-started the chaos that ensued” and was the result of the decision making of one individual.

Crews is the second LMPD officer to be federally charged for actions during Louisville’s 2020 Breonna Taylor protests. Last month, former LMPD officer Cory Evans was sentenced to two years in federal prison for striking a kneeling, surrendering protester in the head with a riot stick on May 31, 2020.

Crews’ attorney, Steve Schroering, declined to comment on her firing or the federal charges she faces.