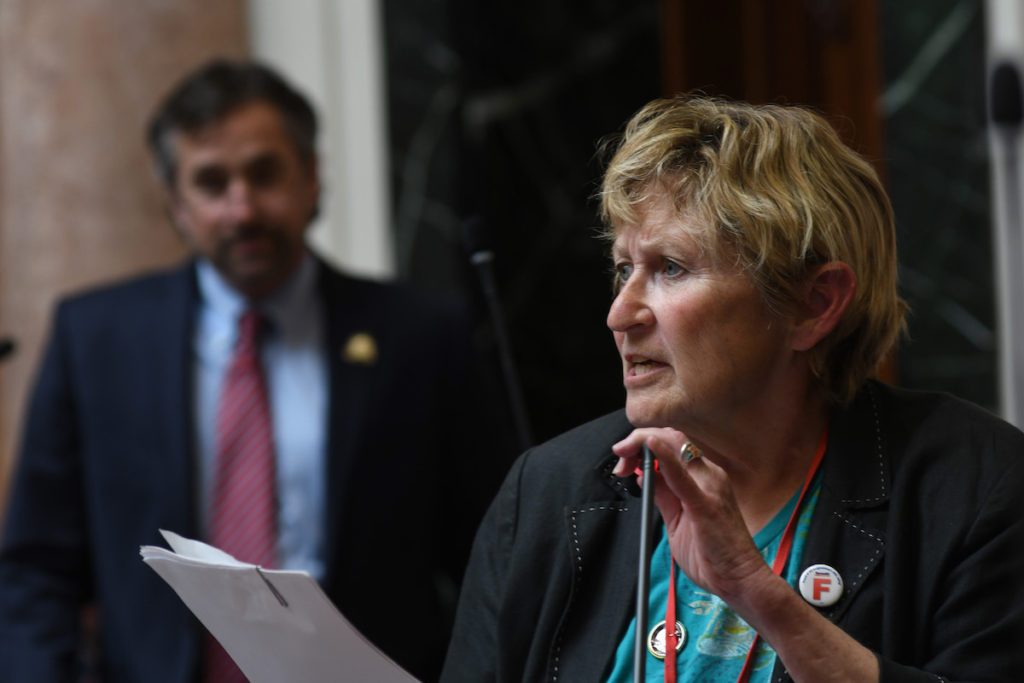 Longtime Louisville lawmaker Rep. Mary Lou Marzian is withdrawing from her race after Republican redistricting pit her against another incumbent, Rep. Josie Raymond — a move that Marzian called “very purposeful.”

“I am not going to play their sadistic and misogynist game of pitting Democratic women against each other,” said Marzian in a statement.

Marzian, who announced her withdrawal surrounded by Raymond and other female lawmakers representing Jefferson County, has served Kentucky House District 34, covering The Highlands and part of Bon Air, for almost three decades — since 1994.

During that time, Marzian focused on women and children’s issues, as well as education and LGBTQ+ issues, including statewide fairness and comprehensive sex ed in schools. In 1998, Marzian was one of six female legislators that Republican legislators called “the Bitch Caucus.”

“We six women were an anomaly to these white-good-ole boys,” Marzian said. “They were uncomfortable talking about breast exams, uteruses and vaginas. One House male Republican even wanted to know if he had a cervix.”

Marzian also had a penchant for filing satirical legislation: Her 2016 Viagra bill received national attention for requiring men to visit the doctor twice and get a note from their wives in order to receive erectile dysfunction medication. She also filed legislation in 2018 that would have dissolved the Kentucky General Assembly and ceded control of the state to the Koch Brothers and ALEC.

Marzian said she would file to run again if the courts throw out the Republicans’ redistricting maps.

Marzian is not the only Democratic female Louisville lawmaker to be pushed out by redistricting. State Rep. McKenzie Cantrell dropped out of her race for the same reason as Marzian: She was going to be forced to face off with her fellow incumbent Lisa Willner.

Rep. Joni Jenkins, who first won her seat just one year after Marzian, has also stepped down, because the new House maps transformed her district into a majority minority area, and, as she said, “representation matters. Jenkins is white. Shively’s mayor, Beverly Chester-Burton, a Black woman, is running for her empty seat.

In addition to Cantrell and Jenkins leaving, state Rep. Attica Scott is running for Congress instead of the Kentucky General Assembly. That leaves six of the current 10 female legislators from Jefferson County still running or recently elected. Four are unopposed.

“It’s bittersweet,” said Marzian about her departure, “but these are my sisters and we’re going to keep fighting.”