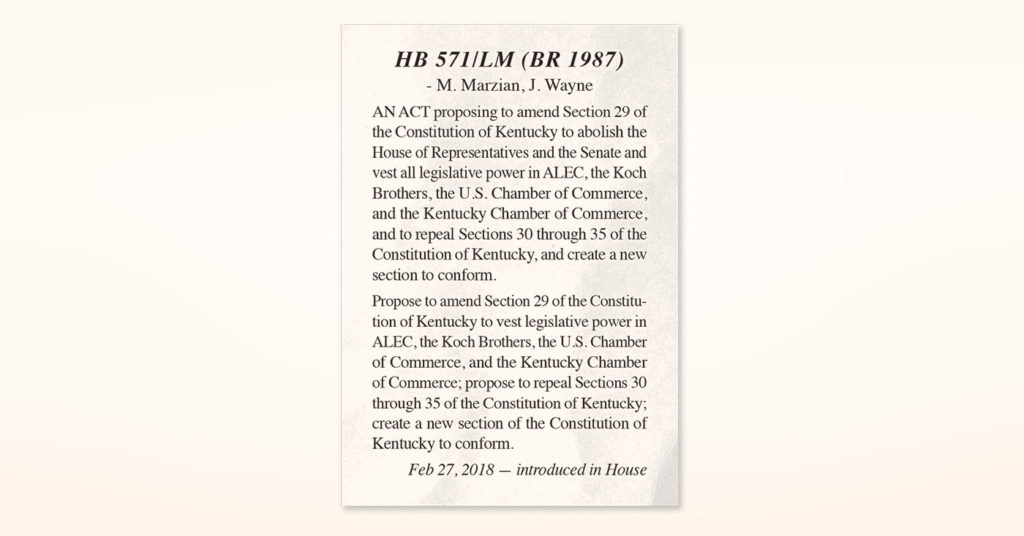 We all know the Koch brothers and Big Business run Kentucky.

Now, two Louisville lawmakers want to amend the state constitution to abolish the House of Representatives and the Senate and vest all legislative power in ALEC, the Koch brothers, U.S. Chamber of Commerce and Kentucky Chamber of Commerce.

That’s right — remove the pretense of actual democracy in Kentucky and call it what it is: a representational oligarchy.

Of course, the legislation sponsored by Democratic Reps. Mary Lou Marzian and Jim Wayne will not get passed, and voters will not get a chance to change the constitution. But the message Marzian and Wayne have sent is clear… and painfully funny.

It isn’t the first time Marzian has used legislative sarcasm. In 2016, she filed a bill that would have required men who want to use Cialis, Viagra or similar drugs to get a signed note from their wives first. And then they would have had to visit a doctor twice and swear on a Bible to take the pills for sex with only their spouses. At the time, she said the bill was a way of calling attention to the pending number of intrusive, anti-abortion bills, including one that did become law — a woman must consult with a healthcare provider 24 hours before getting an abortion.

Below, Marzian and Wayne explain the genius behind their crazy constitutional amendment bill.

LEO: What do you hope to accomplish by filing this bill?

Rep. Mary Lou Marzian: I filed this bill to let the citizens of Kentucky know that corporations and people with lots of money who make big campaign contributions run the state. We must overturn Citizen’s United.

Rep. Jim Wayne: Help people understand the role that the super-rich and big corporations play in the legislature.

What is the message you want to get out, and how effective do you think this tactic is?

MLM: Regular people need to know they have the power to elect people who will truly represent them, rather than politicians who answer to the Koch brothers and the Chamber of Commerce.

JW: Political satire has always been used in this country (and many others) to help citizens understand the follies of governments and those who control governments. We are in a serious crisis in Frankfort and the nation. The power of the common citizen is greatly diminished, creating a world run by the wealthy elite.

What provoked you to file this bill at this time?

MLM: The fact that large corporations have the ear of the GOP and working people are shut out.

JW: Witnessing the complete takeover of Kentucky’s government by the GOP. The GOP is bought and paid for by the likes of the Koch brothers, the Chamber of Commerce and other elitists who have formed a plutocracy. The anti-worker, anti-environment, anti-public education, anti-accountability laws passed since the GOP took control is astounding.

In what ways do you believe the Koch brothers, U.S. Chamber of Commerce and others listed in the bill affect lawmaking in Kentucky?

MLM: The GOP makes sure the Koch brothers and Chamber of Commerce legislation gets passed. For example, charter schools, taking money from public education. Proposing pension plans that put teachers and public employees into 401K plans, to be managed by Wall Street hedge fund operators. Union busting so corporations can make even more money.

Why should Kentucky residents be concerned about this?

MLM: Kentucky citizens end up paying for corporate giveaways, and Kentucky voters must take our state Capitol back.

JW: The common citizen is being shut out. Workers, teachers, the poor, the professional middle-class cannot compete with the big money that the elite pour into GOP campaigns (much of it dark money). When the elite pay $1 million in a single House district race (with just 44,000 people), as happened in 2016, our representative democracy is in crisis. Sad.

AN ACT proposing to amend Section 29 of the Constitution of Kentucky to abolish the House of Representatives and the Senate and vest all legislative power in ALEC, the Koch Brothers, the U.S. Chamber of Commerce, and the Kentucky Chamber of Commerce, and to repeal Sections 30 through 35 of the Constitution of Kentucky, and create a new section to conform.

Here are LEO’s Proposed Bills… because why not?

A bill to require that…

— the membership of all state boards and commissions be friends and family of the governor.