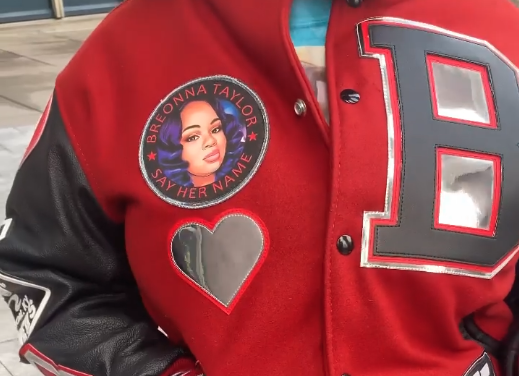 This story has been updated with comment from the judge’s office.

Breonna Taylor’s sister says she and her mom were kicked out of the Brett Hankison trial today after a deputy sheriff told her mother that she couldn’t wear a jacket with Taylor’s face and name.

Ju’Niyah Palmer told LEO that she and her mother, Tamika Palmer, hadn’t even gotten settled in the court room today before a sheriff’s deputy asked to speak with them in the hallway.

In the hallway, the officer told the Palmers that Tamika could not wear her jacket, because it would interfere with the jury, according to Ju’Niyah.

Ju’Niyah Palmer says her mother asked if there was a dress code, but the officer did not answer them. Instead, she said, he called for backup to escort them out.

The staff attorney for Judge Ann Bailey Smith, who is overseeing the Hankison trial, said that state and U.S. Supreme Court cases set a precedent that apparel that prominently displays sympathy for either side in a trial may prejudice the jury or appear to do so, and it could result in a mistrial or an appellate court’s reversal of the judge’s ultimate decision. Judge Smith was unaware that her deputy sheriff had asked anyone in the courtroom to leave, according to staff attorney Bob McClure.

The deputy sheriff told Smith’s staff that he asked Tamika Palmer to leave after she used foul language.

Ju’Niyah Palmer said that her mother cursed at the deputy, because he touched her jacket when telling her that she couldn’t wear it.

The Hankison trial that the Palmers attempted to attend is not for Breonna Taylor’s death but rather that raid that killed her. Former LMPD Detective Hankison is facing three counts of wanton endangerment for shots he fired that went into a neighboring apartment where three people were present.

Palmer said that it’s important for her that she and her family are at the trial and wearing clothing that represents Taylor.

“I think it’s still important for me to wear my sister because they still need to be held accountable for murder of her,” she said. “So even though y’all quote, unquote, saying that he’s not there for Breonna, in reality, he’s here because of her.”

Palmer also said she was asked to leave court and change yesterday for wearing a sweater that said, “Arrest the Cops who Killed Breonna Taylor.”

That was understandable, she said, but she didn’t think the officer asking her mother to leave was.

“My mom’s jacket had nothing about arrest the cops, it didn’t have anything, it just had Breonna on it,” she said.

Tamika Palmer’s jacket featured several patches referencing Breonna Taylor, including two with her face and name on it with the phrase, “Say her name” and another with the date of her death: March 13, 2020. The jacket also says “BreeWay,” a phrase that Breonna Taylor’s friends and family have used often since her death.

On Wednesday, Palmer said she changed and was able to return to court — after which she watched the trial.

“We never were being rude, yelling or anything like that,” she said. “We were sitting just like everyone else was,” she said.

Palmer said she and her mother will be returning to court tomorrow. Palmer also posted on her Instagram stories, calling for other Taylor supporters to show up to court on Friday in “Breonna Gear.”

Palmer says she and her mom are thinking about wearing their Breonna shirts underneath jackets. Because attending the trail is important to them.