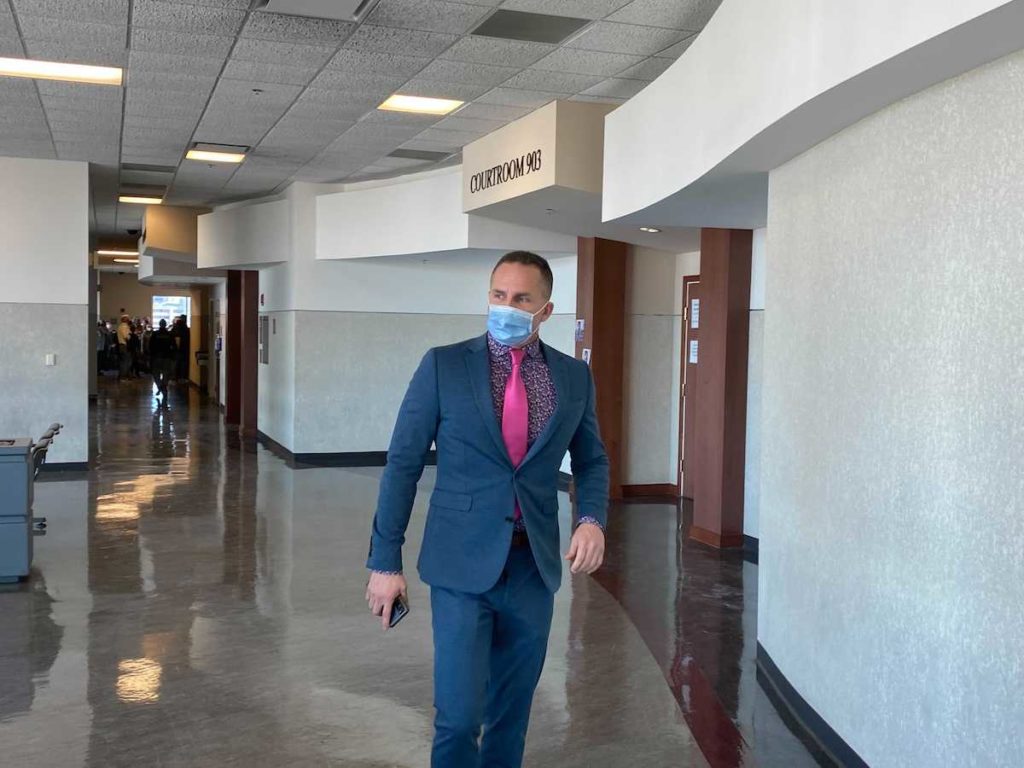 Brett Hankison appeared in court on Tuesday, Feb. 8 for jury selection in his trial.Photo by Josh Wood

On the second day of Brett Hankison’s wanton endangerment trial, jurors heard from LMPD personnel who encountered Hankison in the aftermath of the botched raid on Breonna Taylor’s apartment as well as the police force trainers, internal investigators and a man who was in the apartment above Taylor’s at the time of the shooting that killed her.

Former LMPD Chief Steve Conrad, who was chief of police at the time of the March 13, 2020 raid, said he encountered a “physically shaking” Hankison at UofL Hospital in the aftermath of the shooting.

Here’s a breakdown of what happened today.

“Limitless scope” In Search Of Apartment

The wanton endangerment trial of former LMPD detective Brett Hankison resumed on Thursday with Sgt. Jason Vance, who was with LMPD’s Public Integrity Unit at the time of the raid on Breonna Taylor’s apartment, continuing his testimony on the witness stand.

The Public Integrity Unit investigates officer-involved shootings, and Vance was called to the apartment complex at 3003 Springfield Drive shortly after the botched raid on Taylor’s apartment.

While Hankison’s attorney, Stew Matthews, argued in his opening statement that additional guns or contraband might have been in Taylor’s apartment, Vance testified that the Public Integrity Unit’s search was comprehensive and did not turn up narcotics or additional guns.

“The scope of our search was limitless,” said Vance. “What that meant was we could search anywhere in the apartment legally.”

In his opening statement on Wednesday morning, Hankison’s attorney Matthews said that the warrant had not actually been searched in accordance with the warrant and that “family” had been granted to the apartment after the shooting.

“We don’t know whether there was any contraband in that apartment and what kind of contraband there may have been,” said Matthews on Wednesday.

On Thursday, Vance testified that he could “confidently” say that the integrity of the scene was maintained until the afternoon after Taylor’s shooting, before it was released.

Vance’s began his testimony at the end of the day on Wednesday, when he was on the witness stand for more than an hour before court was adjourned for the day. On Wednesday, Vance explained pictures of Taylor’s home and apartment complex to jurors.

In one of the photos displayed on Wednesday, Taylor’s body could be seen at the end of a hallway.

Later on Thursday morning, jurors were shown a nearly hour-long video of Hankison’s March 25 interview with Public Integrity Unit investigators regarding the raid on Taylor’s apartment. That video, as well as a transcript of the interview, had previously been publicly released by LMPD in October 2020.

The interview with investigators includes Hankison’s only publicly-available remarks on the raid.

In that interview, Hankison said he saw a person in Taylor’s apartment with a rifle in a “military-style shooting stance.” He said that at the time, he thought his fellow officers in the raid near the door were being “executed.” He said he could see muzzle flashes through the sliding-glass door leading to the apartment’s patio. He described firing at those flashes as his “only option.”

It was three of those shots Hankison fired through that sliding-glass door that ultimately ended up entering the apartment next door to Taylor’s home.

Hankison is charged with three counts of wanton endangerment from the shots he fired during the March 13, 2020 LMPD raid that killed Taylor. His charges are not for her death, but rather for shots he fired that went into a neighboring apartment where three people were present.

On June 19, 2020, it was announced that LMPD would fire Hankison. A termination letter from then-acting chief Robert Schroeder said Hankison’s actions during the raid “displayed an extreme indifference to the value of human life” when he “blindly fired ten rounds” into Taylor’s apartment. Schroeder added that the patio door and window which Hankison fired through were covered in a material that “completely prevented” Hankison from identifying a target.

In testimony on Thursday afternoon, former LMPD Chief Steve Conrad said he encountered Hankison in the ER of UofL Hospital after the shooting. Conrad said that during a brief conversation with him at the hospital, Hankison was “physically shaking as if he was upset or very, very nervous.”

Conrad said it was “unusual” that Hankison was at the hospital without being accompanied by  a member of LMPD’s Peer Support Team. Under LMPD’s Standard Operating Procedures, officers involved in shootings are to be assigned an escort by their commanding officer after a critical incident like a shooting and that escort officer “should be” a Peer Support Team member. According to the Standard Operating Procedures, that escort officer is to stay with the officer involved throughout the initial investigation and is tasked with transporting the officer to the Public Integrity Unit office.

Conrad was fired on June 1, 2020 after an LMPD and National Guard response to a curfew violation resulted in the killing of West End BBQ chef David McAtee.

Jurors also heard from Aaron Sarpee, a Black man who was picking up his child from a babysitter who lived in the apartment above Taylor at the time of the raid. Sarpee, who said he would get off work around midnight, said he encountered police after he stepped out of the upstairs apartment. He said police told him to go back inside and that he complied.

In testimony on Wednesday, one officer involved in the raid, Mike Nobles, described a man emerging from upstairs who told officers to leave and “didn’t have nice words to say.” Another officer, Sgt. Mike Campbell, said on Wednesday that Hankison succeeded in getting the man to go back inside by being “really assertive.”

Sarpee, who said he was a combat veteran who had served in Iraq, likened the sound of the gunfire during the botched raid to that of a “machine gun.”

When he finally was allowed to leave the upstairs apartment later that morning, police said he could not take his vehicle, a Toyota Sequoia that was double parked in front of the apartment block.

During cross-examination by Matthews, Sarpee said that he found a shell casing when he went to pick up his vehicle. Sarpee said, “it was almost like an M-16 round.” He said he turned over the casing to the attorney general’s office.

Prosecutors did not follow up on his statements about the casing. Earlier on Thursday, Vance, of the Public Integrity Unit, said he had not found any evidence of a rifle being fired at police as they entered the apartment.

Matthews asked Lacefield: “if Brett Hankison is out at 3003 Springfield Drive and his brother officer Jon Mattingly just get shot and almost executed, would it be appropriate for him to return fire even if he can’t actually see a target, to protect his brother officer?”

Then asked if Hankison “was not justified” in firing his weapon, Lacefield said he did not know enough about the case to know whether Hankison was justified or not in discharging his weapon.

Former LMPD chief Robert Schroeder, who took over leading the department after Conrad was fired, took the witness stand late on Thursday afternoon. He was on the stand for about two minutes when prosecutor Eric Finke asked what Schroeder’s findings were after reviewing the Public Integrity Unit case file relating to the raid on Taylor’s apartment. Matthews, Hankison’s attorney, objected, and Judge Ann Bailey Smith told the attorneys to approach her. After a brief discussion, Smith said that “a legal issue” had come up and would take “a little bit of time to sort through.” She then dismissed court for the day.