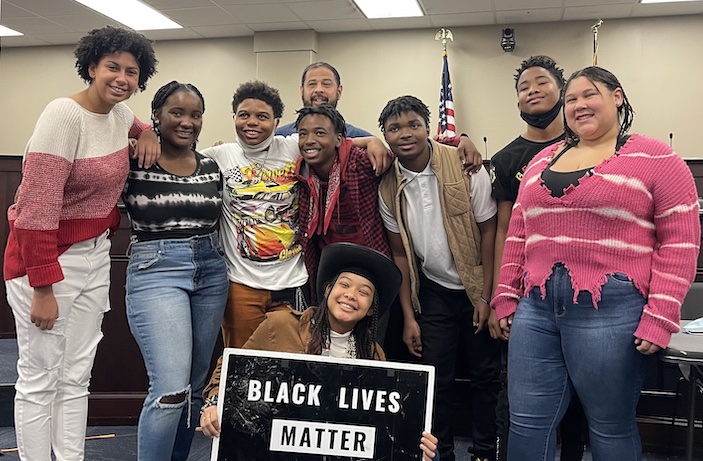 The campaign against Kentucky’s anti-critical race theory bills has started.

On Tuesday, activists gathered at the state Capitol for a day of song and speeches aimed at two bills that would limit what Kentucky schools can teach about race.

House Bill 14 and House Bill 18, introduced by Republican lawmakers, both contain similar language, although House Bill 18 would extend to public colleges, as well as K-12 schools, and it would also limit some discussions on religion.

Tuesday’s event was held by the Coalition for the People’s Agenda’s education committee and attended by JCPS students, called edutainers, from Justice League LOU alongside speakers, including state Rep. Attica Scott.

Genesis Hatchett, an edutainer with Justice League LOU and a 10th grader at duPont Manual High School, said that she’s concerned that if the bills pass, her history will be erased.

“We’re sent to schools seven hours a day for them to give us history and an education that is biased from the point of view of a white man, and we need to learn the truth,” she said.

The Coalition for the People’s Agenda, along with the All History Matters campaign, is asking others to call and email lawmakers to oppose the bills, send opinion letters to local papers and share and retweet their message on social media with a #TeachTruth hashtag. All History Matters is also taking orders for yard signs and giving out activity kits.

In addition to opposing House Bill 14 and House Bill 18, CPA is also fighting against Senate Bill 1, a Republican legislative priority proceeding much faster than HB 14 and 18. The legislation would take power away from School-Based Decision Making councils, made up of parents and teachers, which help determine the curriculum taught in schools.

CPA supports legislation from Rep. Scott, which would require schools to teach the history of racism.

While HB 14 and HB 18 have yet to be assigned to a committee, Gay Adelmann, with CPA, says there is a real fear that they will see movement.

“They wasted no time in pre-filing these bills in July,” she said.

If they are passed, she said that she is worried that it will have a chilling effect on things already being taught at JCPS as the school system is trying to diversify its classes.

Christopher Rasheed, the coordinating director for Justice League LOU, told LEO that he thinks the very existence of his school would be in conflict with the law. Rasheed is a teacher at W.E.B. DuBois Academy, which teaches an Afrocentric curriculum.

“We’re not worried, but we’re not also going to just sit here and take it with a minimum of concern because we know that policy and law impacts people for decades,” he said.

Tomorrow, there will be a rally in the Capitol Rotunda opposing HB 14 and 18, held by a group called Defenders of Accurate History.

What HB 14 Would Prohibit Schools From Teaching