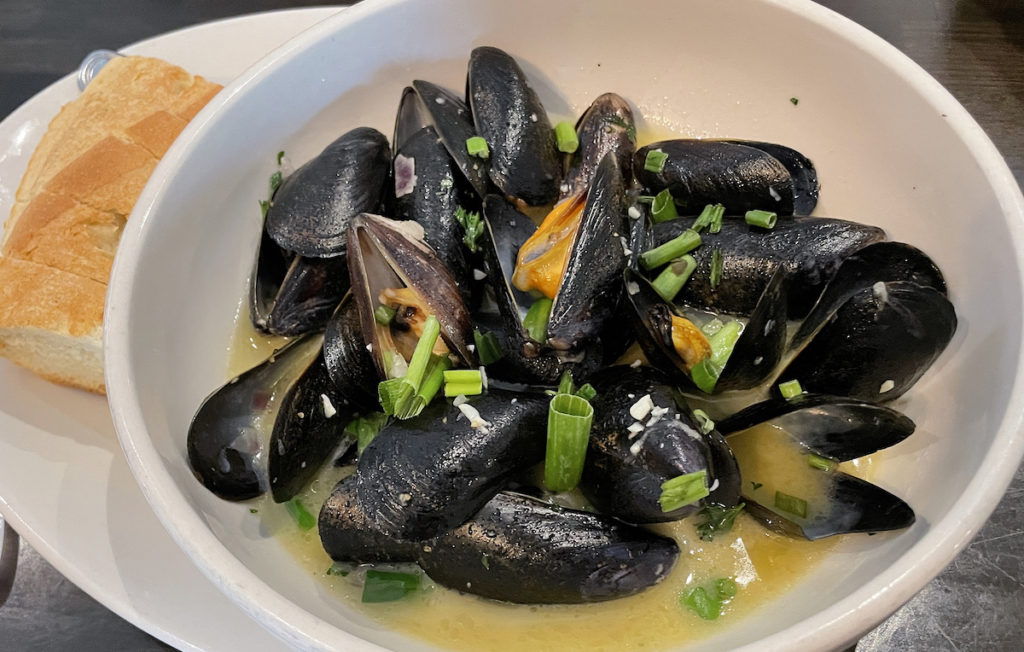 A large bowl of 16 mussels meunière comes swimming in a herbal, buttery traditional French white-wine sauce, with Italian-style bread to mop it up.Photos by Robin Garr

Early in 2013, when Mussel & Burger Bar opened its first shop in Jeffersontown, I couldn’t help but make fun of this previously unimagined combination. “‘Let’s go get some burgers and mussels,’ said no person ever,” I wrote, chortling.

Now, eight and a half years later, Mussel & Burger Bar’s founders have moved on to other ventures, but Mussel & Burger Bar appears to be going strong under new ownership. My recent visit to the J-town operation for lunch with a group of friends satisfied me — it remains just as good as ever.

Showing no inclination to tamper with success, management has maintained the menu with little change over the years, and pricing shows only moderate inflation. The menu-topping C.E.O. burger, an extravaganza of burger with Gruyere, truffle aioli, caramelized onions, and – with an optional $8 upcharge, foie gras – is $25, up only $3 from the 2013 menu.

If that’s too rich for you, the menu offers 14 other burger variations, all — except the seafood burger and the veggie burger — made from 100% Black Angus beef. More than two-thirds of them are priced at $15.99, and they come in creative variations that can dress your burger with Spanish, Italian, Mediterranean, Argentinian, Mexican flavors and more. The seafood burger forms its patty with crabmeat, shrimp and lobster; the local burger brings Sherwood Acres grass-fed beef and smoked Gouda to the table. They’re both $16.75. A classic American cheeseburger saves you a couple of bucks at $13.99.

Mussels are fresh from Prince Edward Island in Canada’s Maritime provinces, and are available in five preparations including French Meunière, Basque, Greek, curry cream or beer cheese. They’re all priced at $13 for an appetizer portion and $16 for a larger main course. They come with a length of Italian-style bread, and pommes frites bring a $5.50 surcharge.

If you go, I strongly recommend that you put mussels or a burger on your must-have list. For the record, though, the menu starts with those signature dishes but does not end with them.

Ten appetizers, many of them sufficient to make satisfying small plates in their own right, offer international flavors and are priced from $6 (for a half-order of ground beef and cotija cheese taquitos) to $21 (for an expansive Spanish-Italian charcuterie plate with three meats and three cheeses). Three salads are $12.59 each, and seven sides are $5.50 to $6.75.

Four hefty sandwiches are $13.75 (for a mushroom Philly, one of the few vegetarian options) and $15.99 (for a turkey duck melt, short-rib grilled cheese or MBB’s signature grilled chicken). Two entrees round out the list: Fish tacos with tempura-battered cod ($16.99), and New York strip steak ($23.95).

A half-dozen indulgent desserts range in price from $6.50 (for a three-scoop selection of homemade ice creams) to $10 (for most of the other selections). A kids’ menu for those 12 and under offers four choices for $7-$8.

Full bar service includes an extensive list of local and artisanal beers and bourbons and whiskeys, and a relatively brief wine list consists of about a dozen mostly affordable options.

The house-made meatless burger ($15.99), a fixture on MBB’s menu since the start, is a thoughtfully imagined creation of beets, mushrooms and red quinoa. This yields a thick, pleasantly chewy patty that — in contrast with the increasingly popular Impossible and Beyond burgers — does not seek to emulate beef, instead bringing its own subtle and complex veggie and umami flavors to the bun. The bun, by the way, is a delicious, high-domed brown pretzel bun sprinkled with crunchy salt crystals. A generous spread of mild goat cheese atop the burger plus a black olive aioli and fresh, crisp mixed lettuces build a flavor crescendo that’s completely different from meat, but remarkably good.

The veggie burger usually comes with sweet potato fries, but our friendly and attentive server, Jewel, generously substituted elotes callejeros — Mexico City-style street corn — for the fries rather than charging me $5.50 for them on the side. A single cob got the standard elotes treatment: smeared with a tasty mix of mayo, chile powder and earthy Mexican cojita cheese. You’re not going to get crisp, juicy kernels with out-of-season corn, but the flavors were so tempting that I didn’t mind at all.

Mussels meuniere came in a large white bowl with 16 mussels in the shell. They were fresh and perfect, soft but slightly chewy, with a faint, fresh aroma of the sea elevated by the traditional light sauce, a buttery blend of white wine, herbs and green onions. Soft white Italian-style bread served to mop it up.