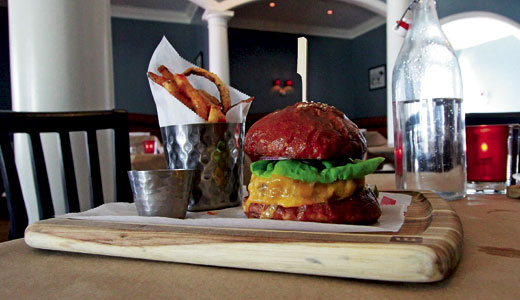 But “let’s go get some burgers and mussels,” said no person ever. That is until the recent arrival of Mussel & Burger Bar, which suddenly has us musing about combinations of artistic dishes never tasted before.

So what is this wacky variation on surf ’n’ turf all about? Our server, Ruben, a friendly guy who seemed to know just about everything, had to stop and think. Then his eyes lit up: “They want to give people a choice of two different good things.”

That seemed fair enough. We dug into the multi-page menu and soon discovered way more than two different good things. Beginning with the obvious, you can take your choice among a dozen savory, sizable burgers and a lucky seven mussel bowls. I couldn’t find a burger with mussels on it, but if you were to insist on this offbeat combo, I’m pretty sure they’d make you one.

Mussel & Burger Bar is the latest from the team of Fernando and Cristina Martinez and Fernando’s cousin, Yaniel, who’ve hit the ball out of the park four times running now with Havana Rumba, Mojito and Guaca Mole. And now they’ve done it yet again with Mussel & Burger Bar.

It’s located in the former home of the short-lived Café Perusa, from which it inherits an unfortunately pretentious pillared dining room that reminds me of a catering hall for wedding receptions in New York’s Outer Boroughs or maybe New Jersey. It’s a little hard to find, too, in a small, slightly out-of-the-way shopping center just past the sprawling Stonybrook.

But no one minds. It has been slammed with delighted diners since its extended “soft openings” in late January, which they generously (and bravely) didn’t limit to friends but opened to Facebook followers.

Breaking from the Latino style of their first three eateries (Havana Rumba is Cuban, Mojito Caribbean and Spanish, and Guaca Mole tricked-up Mexican), the Martinezes have gone worldwide here. The burgers alone dress in the styles of Spain, the Mediterranean, Argentina, Italy, Cuba, Mexico and the American South. (There’s also a short list of other sandwiches and mains, but you really need to come here for mussels and burgers.)

Burgers? You can get a patty on a bun for as little as $9 (for a number of options) to a jaw-dropping $22 for the C.E.O. with the foie gras option, which my attorneys advise me against recommending for reasons of either cardiology or animal kindness. All the rest are $13 or less, oversize creations cooked to your order and built on quality house-made buns.

The Good Ole burger ($10) is the benchmark standard, an Angus burger topped with cheddar, red onions, tomato and Boston lettuce. As with most of the burgers, it comes with an order of fresh if not particularly inspiring “pomme frites.”

If you want to kick your fries up a notch, try the oversize, truffle-scented fries that come with the aforementioned C.E.O., or the crisp sweet potato fries that accompany the Veggie burger ($9), which is no mere store-bought soy patty but a house-made creation fashioned from sweet beets, healthy red quinoa and a shot of piquant spice, topped with goat cheese and black-olive aioli on a pretzel bun. The Italian Job ($13) tops your burger and onions with funky Taleggio cheese, crisp-seared prosciutto and roasted tomatoes with arugula.

The mussels ($7 for an appetizer portion, $10 for a main, plus $3 for fries on the side) are fresh shellfish from Prince Edward Island in Canada’s Maritimes. A generous bowl of maybe 20 goodies come sauced with an international set of options.

Our group gave two thumbs up to the Moules Basquaise, simmered with chunks of chorizo, piquillo and Piment d’Espelette peppers in an aromatic lobster sofrito broth; and the Meunière, a classic French prep in a simple white-wine and shallot sauce. Other appetizing options included a lemongrass curry cream sauce; earthy Greek or spicy Mexican sauces; an American-style blue cheese and beer bowl; or aromatic Provencal bouillabaise.

Among other things, we also put away decent fig and beet-ricotta salads ($7), filling apps of short-rib and veggie nachos ($8), both outstanding, re-imagined with crisp potato chips replacing the traditional tortillas; and drinks from the short, reasonable and well-chosen wine, beer and cocktail lists.

It was crazy to add dessert, but of course we did: a trio of house-made ice creams ($5 for a trio of chocolate, Nutella and coconut).

Even with a new-eatery glitch here and there — all the local beer taps were blown — the evening was memorable, and it’s easy to see why the crowds just keep on coming. Our share of dinner for two was a reasonable $57.24, before tip.