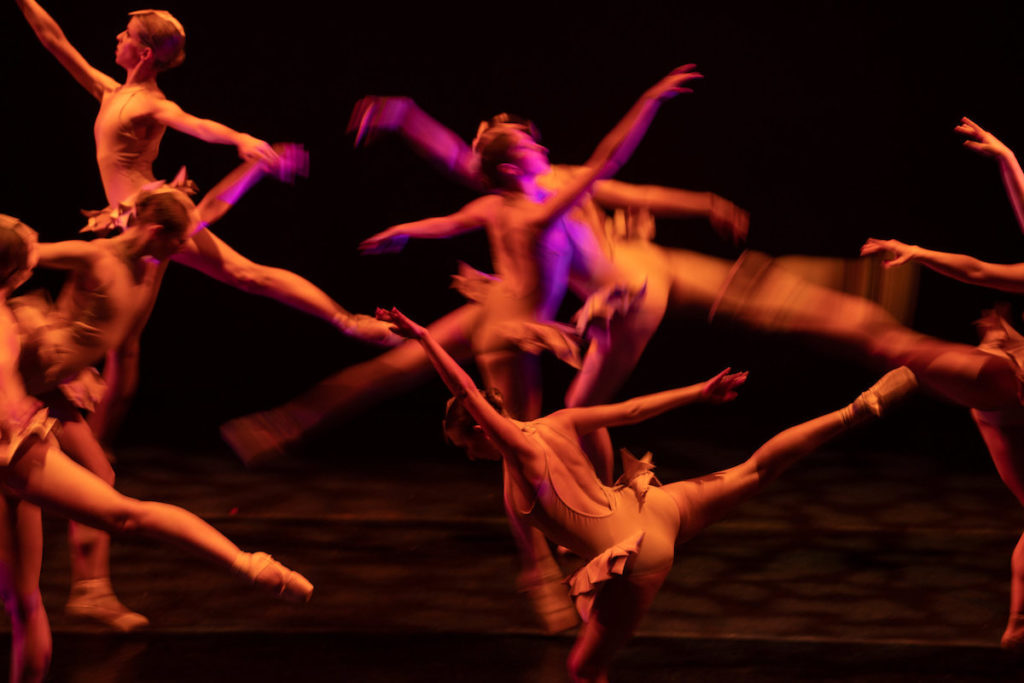 The costumes in "Swan Lake" were designed using elements of origami. Provided photo

The Louisville Ballet’s performance of “Swan Lake” has a few more shows. One of the outstanding aspects of the new show is the Ballet’s collaboration with local artists on lighting and costuming. LEO asked costume designer Tiffany Woodard a few questions about the designs and how she worked with the ballet to add some modern elements to a classic favorite.

LEO Weekly: What was the vision for the costumes for this performance of ‘Swan Lake’?

Tiffany Woodard: When Robert [Curran, Louisville Ballet artistic and executive director] and I first began discussions about the costumes for this season’s performance, we knew we wanted to elevate the design of the swan costumes significantly from the show in 2016. The thing that is so incredible about Louisville Ballet’s rendition of “Swan Lake” is that it intentionally plays up this juxtaposition between the traditional and the modern. You have this classic choreography and music married with a futuristic laser light show — and we wanted the swan costumes to mirror that.

How did you create costumes to reflect that?

The new swan costumes incorporate this juxtaposition as well. They were designed using elements of origami, a traditional, centuries-old art form rooted in craft. But the clean, angular, geometric shapes and lines add a wholly futuristic element — capturing the theme in a tangible representation and pulling it onto the stage via the swans themselves.

Talk a bit about the role the costumes play in the story?

This rendition of “Swan Lake” includes a nearly bare stage with dancers and lasers working together to bring the set to life — telling the story through movement and light. In addition to changes to the design, this year the swan costumes are also dyed to match the color of each dancer’s specific skin tone rather than traditional black and white. Again, while the ballet seeks to honor the traditional elements of this classic ballet (which is why we opted for leotards) we also know that the original production includes outdated tropes surrounding ideas of light and dark, conformity, and uniformity. As a company, Robert and the ballet wanted to actively challenge these tropes and bring the performance into the modern era. These are also significant plot themes in “Swan Lake” and, in a way, the costumes act as an additional character. As an indigenous woman myself, I was excited to take on that challenge and watch the vision come to life.

These are principal dancer Erica De La O’s final performances with the Louisville Ballet; can you talk about if you reflect that somehow in her costuming?

It was so exciting to work on this project where we really got the chance to capture a piece of each dancer in their wardrobe. All three principal dancers — Natalia Ashikhmina, Brienne Wiltsie, and Erica De La O — bring something unique to the character, and so it’s really cool that their costumes can as well. Of course, it was special to design something for Erica given that this is her last performance. I’m honored that she’s wearing my design for her final show.

Any other details we should know?

I would just add that while this was certainly a challenging project, particularly the dying process which required some troubleshooting to accomplish, we are thrilled with how everything turned out and can’t wait for audiences to see it.