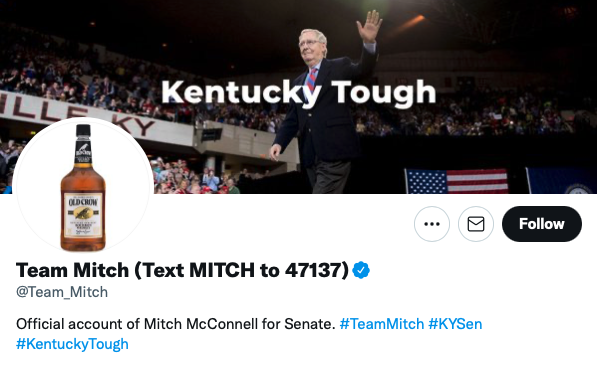 Former President Donald Trump wasn’t the brightest person to ever hold the White House, but he is pretty effective at getting right-wingers to play along with his bizarre, child-like behavior.

Last week, Trump called Mitch McConnell an “Old Crow,” after the Senate minority leader supported and voted for the infrastructure bill. On Thursday, the Twitter account of Team Mitch — a verified official account for McConnell’s campaigning efforts — changed their profile picture to a bottle of Old Crow Bourbon.

It’s unclear whether the person (or team) that runs the account is leaning into and co-opting the joke (the likely scenario) or that the account was compromised (the picture is still up as of Friday morning, so probably not), but the last post to hit the account was a retweet from Barstool Sports’ PFTCommenter that was dated Nov. 2.

Either way, the fallout between McConnell and Trump has heated up in the last few weeks, and, if Trump decides to run in 2024, it would create an interesting dynamic in terms of how much of the party falls in line, and if there’s any resistance to his potential bid, especially from Republican leadership. McConnell has been generally shrugging off the insults, but he’s known for playing the silent and cutthroat long-game.

But, at least Trump is still in Twitter exile, although there’s also still a battle roaring over that.