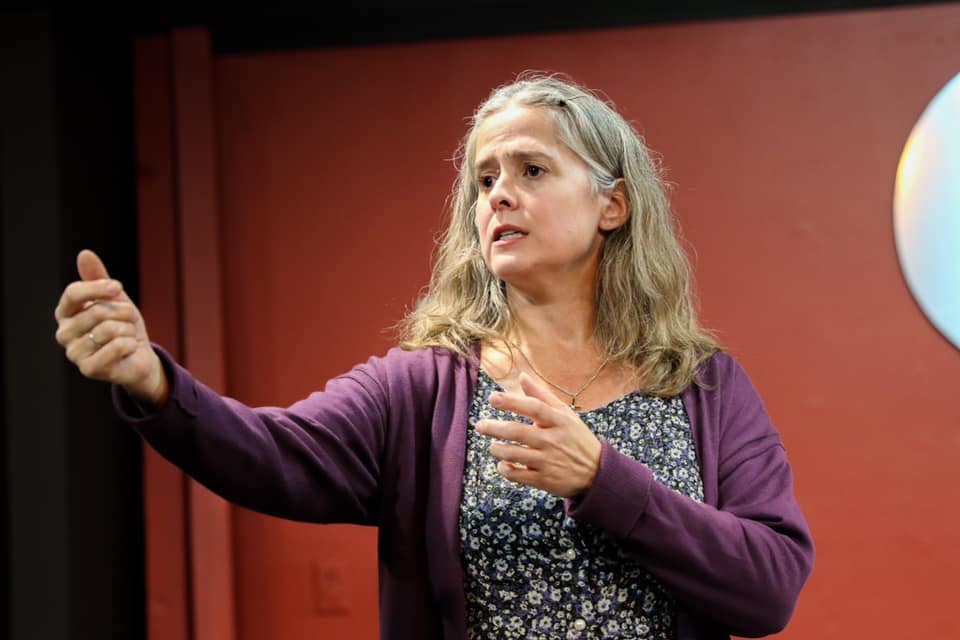 Shelby County Community Theatre, which in recent years has produced extraordinary, diverse programming that mixes community theater staples with demanding rarities — including an astonishing production of U.S. Poet Laureate Richard Wilbur’s translation of Moliere’s “Tartuffe” that ran a few months before the pandemic.

The company is back in production, and last weekend opened another rarity — a revival of a seminal modern masterwork that deserves to be better known: Jane Martin’s “Talking WIth…”

“Talking With…” premiered at Actors Theatre of Louisville in 1982, a period when the company was producing a wave of brilliant theater — and introducing the world to the work of some great playwrights who happened to be women. In 1981 and 1983 Beth Henley and Marsha Norman, both of whom produced their first plays at ATL, won Pulitzers.

But in between, in 1982, it was the pseudonymous playwright Jane Martin who captured the attention of American theater with “Talking With…,” a collection of short monologues for women that premiered at ATL (and later had a production in New York). Nothing was or is known about Martin’s identity — or gender. But based on the principle that gender is as much an act of agency as of assignment, and since the choice of pseudonym is an act of agency, and writing plays is an act of agency, I propose that what matters is the work itself; I saw the premiere production and remember it as a fascinating, stunning, baffling experience unlike anything I’d seen before.

It still is. And SCCT’s revival, directed by Jack Wann (who was working at ATL when the play premiered), is exactly what a revival should be. It’s fresh, rich, and true to the script. And the performances are fearless and formidable. At a post-performance Q&A opening night, I asked whether any of the women on stage had ever seen the play. None had. There’s a good chance you haven’t either — because for reasons I could guess at, it doesn’t get many productions.

Ten characters speak to us in the play’s episodes.  In “15 Minutes,” Moira (Shelly Marquart Reed), an actress preparing in her dressing room, reveals herself to us not by talking about herself, but by talking to us about the unknown audience that awaits her when she takes the stage. She is so fascinated by us that she craves a reverse program that lists those of us in the audience, with our backgrounds and the roles we’ve played in our lives.

This first episode encapsulates the genius of Martin’s storytelling. Although the pieces are rich in humor, anecdote, and incident, it’s the fierce passion with which these women behold the world before them that brings them alive. And all these performers grab tight and hold on.  “Scraps” features  Laurene Scaif as a housewife who fantasizes about the land of Oz and hides herself away, closeted in plain sight in the bright guise of a patchwork doll.  Emma Lambert plays April, a baton twirler whose career-ending injury cannot dim the transcendent ecstasy of spinning a baton into the heavens. In “Big 8,” Courtney Richardson Sturgill plays a rodeo veteran rebelling as she sees the pure roots of her art and community being destroyed by mercantile corruptions. In the powerful “Clear Glass Marbles,” Laurie (Sacha Powers) tells us she found a way to control her fate after receiving a grim medical prognosis.

For Lila (Jeni De Lancey), each of the lamps that illuminate her quarters are the glowing memories of those she has loved. Religious and spiritual motifs flow through some of the pieces, most notably in “Handler,” where Lethia Nall plays Caro, whose brilliantly delivered discussion of the technical aspects of snake handling (and the respective qualities of rattlers, copperheads, and water moccasins) gives way to a startling revelation.  “Dragons” finds Marti (Jennifer Poliskie) in the throes of fear and love as she lies in labor, preparing to give birth to child against the advice of her doctor to end the pregnancy.  In “French Fries,” Cheryl Rankin Van Stockum plays Anna Mae, who spends her life in a McDonald’s restaurant where she witnesses miracles (and in a prescient piece of writing from 40 years ago waxes poetic about the fact that plastic products last through eternity).  And “Marks,” which closes the show, features Mary Ann Gramig as a heavily tattooed woman reminding us that it is the marks others leave upon us that makes us who we are

The Liminal Playhouse is another fearless company with an eclectic approach to repertoire. Its production of Harry Kondoleon’s “The Houseguests,” directed by Tony Prince with Vanessa Hutchinson, Keith McGill, Ryan Lash, and Jay Padilla-Hayter in the cast, calls out for equally fearless audiences. While pop culture entertainment offers us comic book heroes and villains, serious theater and cinema takes real risks. The first half of “The Houseguests” inhabits the uncompromising world of certain strands of modern European cinema where fraud, contempt and the cruelties of class and gender are depicted with a clinical, extreme, unsentimental candor. Humiliations sexual and psychic run rampant (toe-sucking is on the agenda).

But at some point, even despair wears us down until the only thing left to do is laugh. And the implausible gonzo weirdness of the second act is disturbingly, shockingly….well… funny. I mean that in a very cruel way. I don’t know what justice looks like, but perhaps it looks like four ruined, apparently irredeemable people shouting “Love” into the deaf ear of an empty universe.

In general, the word “like” is meaningless when it comes to art. Nobody “likes” “Oedipus Rex” or Goya’s etchings called “The Disasters of War.” Nobody is going to “like” “The Houseguests.” And I don’t think it shares anything in common with those other works than the fact that I can’t imagine anyone walking out saying seriously, “I liked that.”  So, if you want to go see something you’ll like, it’s probably not for you.  If you’re interested in seeing some extreme theatre and some excellent no-holds-barred performances that might get you thinking, then give it a shot.