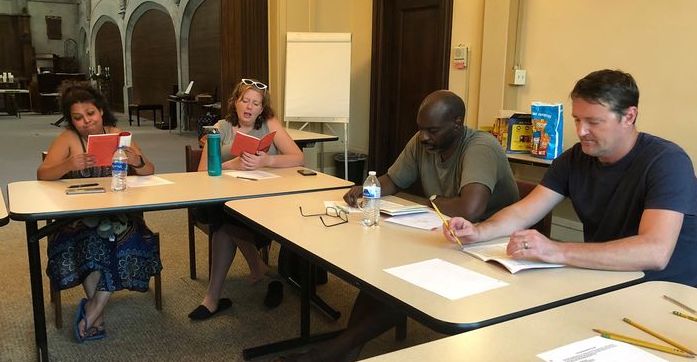 "The Houseguests" actors at their initial read-through of the play. | Photo courtesy of The Liminal Playhouse

The Liminal Playhouse will be opening their new show, “The Houseguests” tomorrow, Oct. 14. The play, by Harry Kondoleon, is a dark comedy where the two lead characters welcome some unusual guests to their home that will take this “couple” on a journey they don’t expect.

The synopsis of the play on Kondoleon’s website goes a bit deeper into the story to where the couple intends to kill their houseguests until love connections begin, and the contests between the two deepen into something infinitely more dark and ridiculous.

The play was first produced in New York City in 1993. The Liminal Playhouse originally intended to bring the play to the stage last spring but, as with most of life last year, their plans were interrupted by the pandemic. Luckily, they are finally able to make this happen with the original cast and design personnel.

The play will be directed by Tony Prince, who also serves as the artistic director and costume coordinator. Starring as the main couple, Vera and John, will be Vanessa Hutchinson and Keith McGill. The houseguests, Manny and Gale will be played by Ryan Lash and Jay Padilla-Hayter respectively. Design for the play will be led by scenic designer Scott Davis, lighting by Lindsay Krupski, costumes by  Prince and sound by Richard McGrew.

When the play was first produced, the Village Voice called it, according to the press release, “horrific, postmodern high comedy.”

In a press release, Prince says, “We are very pleased to finally be able to present the Louisville premiere of this timely and rarely produced play.”

Performances will be at The Henry Clay Theatre, 604 South Third Street.

Masks are required and vaccinations are requested.