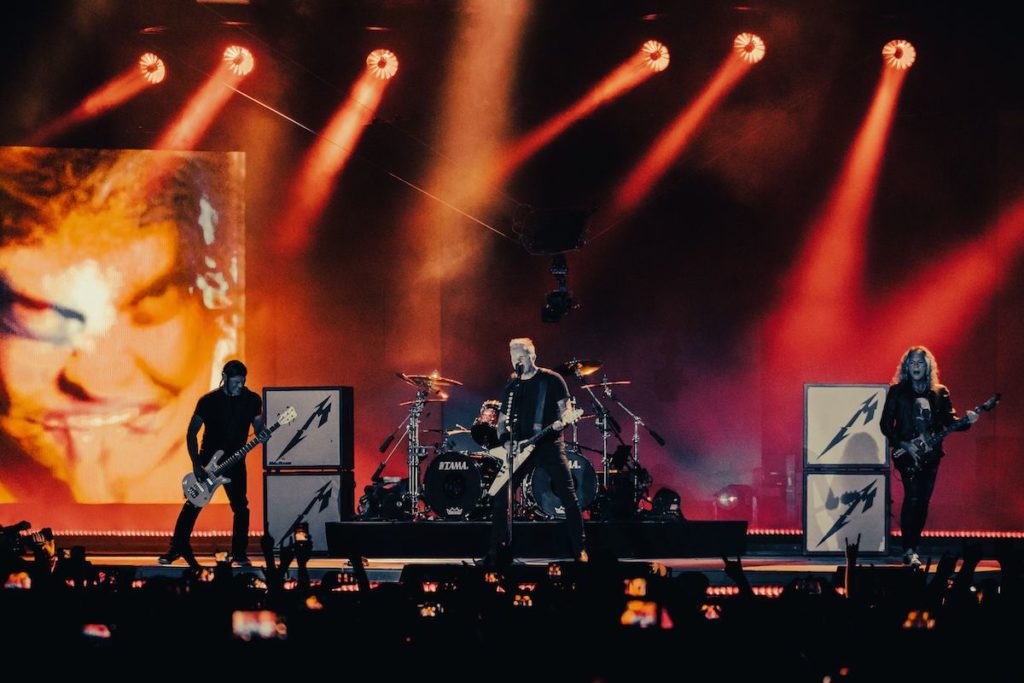 Metallica got experimental at its Sunday Louder Than Life show. | Photo courtesy of Danny Wimmer Presents

I guess we should get to the news first: Metallica performed “The Black Album” in its entirety on Sunday at Louder Than Life. The legendary, platinum-selling record featuring some of the band’s most iconic songs turned 30 this summer, and, in its honor, Metallica played it in reverse order, which is exactly the sort of thing a band that plays two nights at the same festival should be doing.

More on that set in a minute, but let’s backtrack and talk about Friday’s set real quick. It was rock solid. One of the biggest chances you take when seeing a band that’s been around for 40 years, with their best studio records several years behind them, is: What if they’re washed up? What if the vocal suffered the cruelty of time? What if they’re not invested? What if they’re shells?

Metallica remains the same. They’re ageless. James Hetfield’s growl is built to last, and his vocals are still spot on. Instrumentally, we all know that aggression and style wasn’t going to fade. On Friday, they played the hits. “Ride The Lightning,” “Harvester Of Sorrow,” “The Memory Remains,” “One,” “Battery,” “For Whom The Bell Tolls,” “Master Of Puppets” and their cover of “Whiskey in the Jar” were all on the night one setlist. They also dug a little deeper with songs like “Cyanide” from Death Magnetic and “Moth into Flame” from Hardwired… to Self-Destruct.

If you were looking for a greatest hits set with a few twists, that’s what you got, and it was a smart way for them to kick off the festival. But, obviously, the tough thing about play two nights at the same festival, is that the expectation is to not only have different songs on each setlist, but it’s also to create something completely unique the second time around — or even the hardcores will get bored. You have to get experimental. You have to create a singular experience. The idea is to grab some headlines. Prove that it made sense to be booked for two days. And Metallica did exactly that.

On Sunday, they kicked off the set with a song from from their most recent record (“Hardwired”) followed by a song from their first record (“The Four Horsemen”) before diving into a major hit (“Welcome Home (Sanitarium)”). Rumors were circulating about the possibility of the band playing The Black Album, which is actually self-titled, in its entirety, and the crowd went nuts when they announced that’s what was going to happen. For the next hour, we heard all 12 of the record’s songs, from bottom to top — from the deep cuts like “The Struggle Within” and “My Friend Of Misery” to the songs that are played on every hard rock radio station every single day, like “Sad But True” and “Nothing Else Matters.”

It was a smart decision, not just because it’s a great album, but also because with the 30 year anniversary rollout — a remaster and a covers record (Phoebe Bridgers’ cover of “Nothing Else Matters” is mandatory listening) — The Black Album is on a lot of people’s minds. It’s riding a bit of a wave again… well, I guess it’s sort of eternally embedded in pop culture, but the wave is a bit bigger than usual. And what better way to hear it after a dry spell of live music than from a stage featuring the creators themselves? It was a show that everyone who was there will be talking about for years.