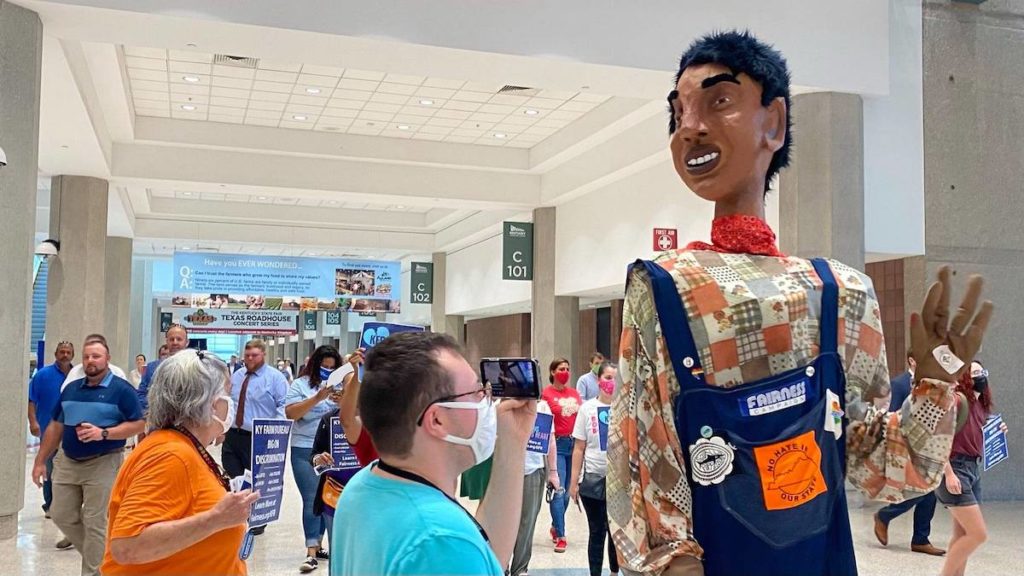 As sure as funnel cake sold from a food cart, as sure as a kid vomiting at the midway, the Fairness Campaign showed up to the Kentucky Farm Bureau ham breakfast at the Kentucky State Fair to protest the insurance organization’s discriminatory policy positions against LGBTQ+ people.

Fairness Executive Director Chris Hartman and supporters have showed up to the Fair every year since 2012 to protest KFB’s annual fundraiser.  Well, every year except 2020 when the Fair was closed to the public due to coronavirus.

This time, though, Hartman wasn’t arrested, as he was in 2015 and 2019. But, there was a heavy Kentucky State Trooper presence at today’s demonstration.

The Fairness Campaign protests the KFB breakfast, because of the organization’s public policy positions that it runs each year in a booklet that is distributed to state and federal legislators. (In addition to selling insurance, the Kentucky Farm Bureau also describes itself as “a voluntary organization of farm families and their allies dedicated to serving as the voice of agriculture by identifying problems, developing solutions and taking actions which will improve net farm income, achieve better economic opportunities and enhance the quality of life for all.”)

The KFB’s policies also oppose teacher strikes and abortion (“we strongly believe in the value of all individuals both born and unborn”), and they support random drug testing for those receiving government benefits.

In a statement to LEO in 2017, the KFB defended its policies by saying, “Our public policy positions are developed from ideas offered by grassroots members, originating at county Farm Bureau meetings. Our members develop and vote on agricultural, fiscal, social, and other policy ideas they believe are important to Kentucky. The legislative policies approved at the county level move to the state level through a free and fair democratic process. This process ensures that the will of the majority, not the opinion of any one individual, is reflected in our public policy positions.”

Hartman says the purpose of the protest is two-fold: To convince the KFB to drop its policies and to raise awareness among KFB’s customers about what the company’s stands for.

Hartman said this year’s protest “went great,” even though breakfast attendees entered through a different entrance this year than in year’s past. Fairness protesters walked to the other entrance to greet people going to the event with flyers and chants of “Kentucky Farm Bureau stop the hate. Why does KFB discriminate?”

“We definitely got the message out,” he said. “Plenty of people showed up.”

Correction: An original version of this story misspelled the name of KFB’s mascot.