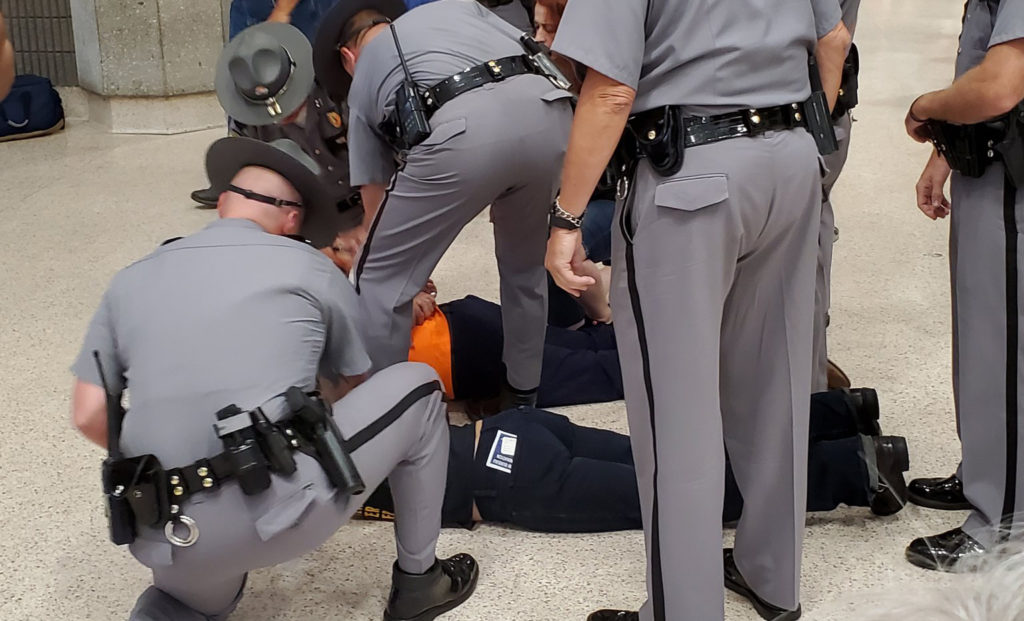 Fairness Campaign Director Chris Hartman was arrested Thursday at the annual Kentucky Farm Bureau ham breakfast and dragged from the event as he and others protested the bureau’s anti-LGBTQ policies.

In a video Hartman posted on Facebook, as he sat handcuffed in a police cruiser, he said:

“I am sad to report that the Kentucky Farm Bureau and the Kentucky State Police have once more conspired to send Farm Bureau breakfast protesters to jail. I am handcuffed after being aggressively, violently arrested and dragged out.”

Then, a trooper reached into the cruiser and appeared to grab Hartman’s phone and the video disappeared.

The ACLU of Kentucky tweeted that two other protesters, Sonja de Vries and Carla Wallace, both longtime activists, also were arrested.

Hartman was arrested after he presented a ticket to enter the breakfast.

In an email to LEO, Kentucky State Police Sgt. Josh Lawson did not respond to Hartman’s claim that he was roughed up. But he said the protesters had been provided an area on the fairgrounds but outside of the event where they could protest.

“This area allowed for safety and security for both protestors and fairgoers alike. However, three individuals attempted to force their way into the private event while carrying a puppet approximately 9-10 feet tall and causing a disturbance,” Lawson said.

The three were charged on suspicion of menacing, disorderly conduct and resisting arrest, he said.

According to Lawson, the U.S. Sixth Circuit Court of Appeals “upheld KSP’s procedure for protecting the safety of the Ham Breakfast and its attendees. The Court ruled that anyone engaging in activity to disrupt a private event or engaging in activity not related to the purpose of the forum may be removed.”

Hartman was arrested under similar circumstances at the breakfast in 2015. The charges, including disorderly conduct, later were dropped.

Kentucky Farm Bureau President Mark Haney said in a statement that KFB’s policies are nondiscriminatory and follow the law, the Courier Journal reported.

Read more of LEO’s coverage of the Farm Bureau’s discriminatory policies, including columns by Hartman and Aaron Yarmuth, plus a rebuttal from the Kentucky Farm Bureau.