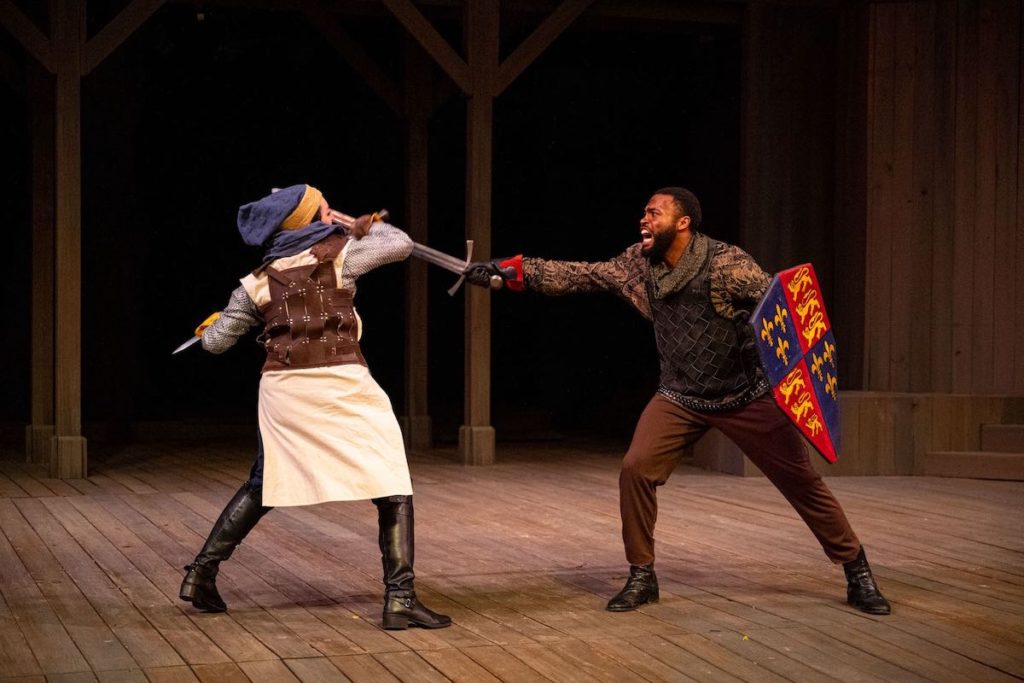 In 1398, King Richard II of England did something that astonished the cutthroat, blood-soaked world of medieval England: he stopped two noblemen from killing one another.

The incident is recounted in great detail in Raphael Holinshed’s “Chronicles of England, Scotland, and Ireland” and in another chronicle by Edward Hall — and should you ever find yourself wishing desperately for another season of “Game of Thrones,” just download Holinshed from Project Gutenberg — you’ll soon wonder how anyone at all survived the Middle Ages.

These chronicles, published in the 1500s, had an enormous influence on the course of English culture and history. They became source material for a slew of Shakespeare’s plays (not only the histories, but “Macbeth “and “King Lear”), as well as a number of his contemporaries.

What happened in 1398 is that two noblemen, Thomas Mowbray and Henry Bolingbroke, came to Richard’s court and accused one another of treason. Richard tried to talk them down, but failed: They threw their gages (armored gloves) upon the ground and in the custom of the day the challenged one another to trial by combat as part of a code of honor.

According to both chronicles, the day of their battle was a grand affair, with some 10,000 knights on hand to keep the peace in case a fight broke out between the men’s factions.

But, at the last possible minute, Richard halted the affair and sentenced both men to exile. This moment leads inexorably to Richard being deposed and Bolingbroke eventually becoming King Henry IV.

For hundreds of years, trial by combat was a fixture of European law, and though King Richard II had the power to stop the duel, his doing so must have felt as disruptive as, say, a U.S. President deciding to suspend the Supreme Court.

It was such a fraught moment that 200 years later, in 1595, Shakespeare used the incident to kick of his play “Richard II” and the epic four play cycle that contemporary critics call The Henriad: “Richard II,” “Henry IV” (parts 1 and 2), and “Henry V.”

These four plays cover a quarter century that ushers in a new world order. By the end of “Henry V,” the romanticized old world order — represented in “Richard II” by John of Gaunt, who famously laments Richard’s degradation of his beloved “sceptered isle” — has given way to a world where “honor” can first be mocked by the smart, cynical Falstaff — and then comically satirized as Shakespeare depicts people in the scruffy lower classes start to mimic the language and behavior of the gentry.

War, honor and trial by combat are central to the chivalric culture of the Middle Ages — at least among the nobles. It was an expensive affair to be outfitted with horse and armor — or even a bow. And, by most accounts, was a prerogative and requirement for nobles

But right around 1400  — just as this cycle of plays begins — things started to change.

In 2017, in The Journal of Economic History from Cambridge University Press, Neil Cummins, a professor at the London School of Economics, published a paper entitled “Lifespans of the European Elite, 800-1800.”

But what Cummins finds is that, “European nobility specialized in the execution of violence,” and that for the first 600 years of this period (that is, 800-1400), approximately 30% of male European nobles died of violence (warfare and combat). Beginning around that time, the lifespans of European nobles starts to climb — and the percentage of deaths by violence drops to around 5%.

Cummins doesn’t offer absolutely firm conclusions about why noble combat deaths declined so much. But he does touch on something that military historians sometimes call “the infantry revolution,” a long period during which military technology and tactics gradually shifted away from nobles on horseback to commoners on the ground, who will soon enough become cannon fodder.

The three central figures in this four play cycle are two great noble figures — Richard II and Henry V — and the cynical, loutish, drunken Falstaff, who by all accounts was at the time (and arguably still is) the most popular of Shakespeare’s characters.

Why did Richard II halt the death match between Mowbray and Bolingbroke? There are plenty of theories — but Richard explains himself, saying, “Our kingdom’s earth should not be soil’d with that dear blood which it has fostered.”

Richard II is often described as “irrational” and “arbitrary” — and sometimes played as something of a madman — but Shakespeare’s Richard II is also extraordinarily smart and insightful. And perhaps he was tired of bloody battles over honor. Much later in “Richard II,” as Bolingbroke rises to power, there is another scene involving the throwing of gauntlets. By the time it’s over, a half-dozen men are throwing gloves all over the state in a comic frenzy that only ends when one of them runs out of gloves to throw.

It’s as silly as a golden age Saturday Night Live skit — and it signals the end of a certain view of “honor.”

The great Falstaff, of course, is often called a “coward” because of his disdain for war and his meticulously argued dissection of the false nature of “honor” in “Henry IV Part I.” What is honor, he asks, “Does he that died a’ Wednesday, doth he feel it? No.” But in his way, Falstaff is echoing Richard II in rejecting the code of honor.

It’s left to Henry V — whose own approach to honor can be construed as either cynical or inspiring, or both, to engineer the shift from the old world to the new, and turn “honor” into a tool for mobilizing the commoners. Before the Battle of Agincourt, Henry V is reported to have given a rousing speech. Whether it was as great as the “band of brothers” speech Shakespeare wrote for him is impossible to say, but its promise, “he to-day that sheds his blood with me shall be my brother; be he ne’er so vile, this day shall gentle his condition,” has had an enduring influence for 400 years.