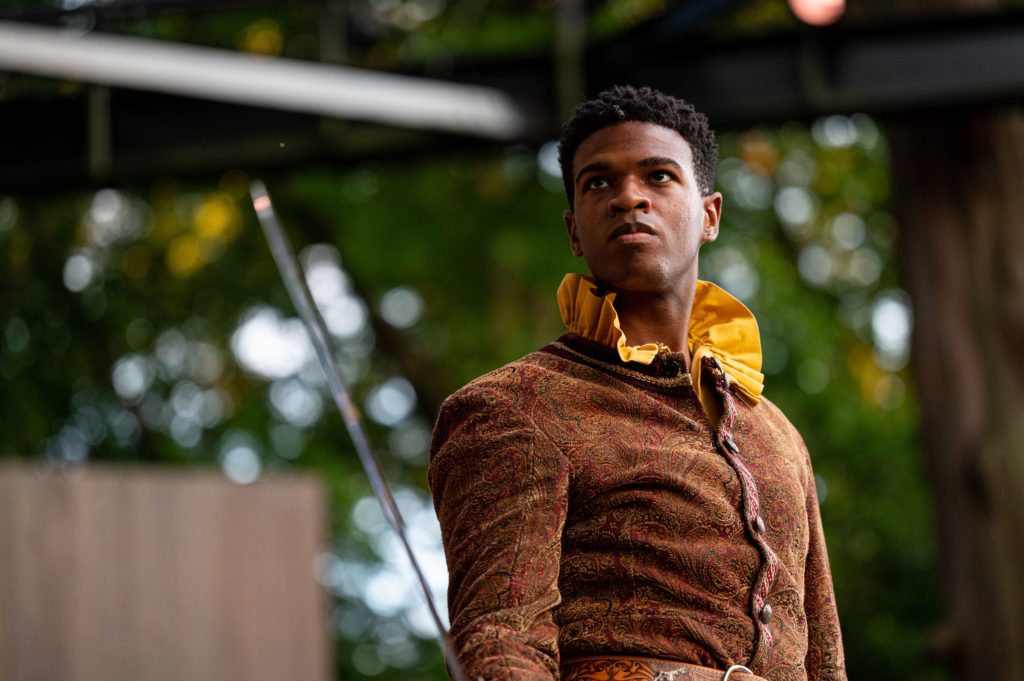 In 2017, when Kentucky Shakespeare set out on a four-year plan to stage Shakespeare’s Henriad cycle (“Richard II,” “Henry IV” parts one and two, and “Henry V”), the company branded the project as “Game of Kings.”

I suppose that not-so-subtle pop culture reference was designed to overcome audience reluctance to attend a collection of plays that bear a not-so-appealing label — “history plays.”

Five years later (after last season’s hiatus), any such reluctance must be a thing of the past: more than 1,000 people came to Central Park’s C. Douglas Ramey Amphitheater last Friday for the opening of “Henry V.”

The multi-year schedule was ambitious in itself, but even more ambitious was the company’s decision to build a multi-year plan around the idea of maintaining a nearly entirely intact company of actors and technical personnel across the entire span of the project, so that, for instance, Zachary Burrell could inhabit the part of Prince Hal/Henry V across the span of three (make that four) seasons.

The result is a piece of stunningly beautiful theater.  This is a sprawling play with something like 40 characters whose lives play out in courtly palaces, seedy taverns, army camps and turbulent battlefields. It’s a play that is heady and bloody, bawdy and romantic, graceful and glorious and raunchy and grotesque. And it’s a play — like one of those enormous medieval tapestries — that achieves its greatness only when every incident and character is rendered with complete attention and perfect clarity.

That’s something for which, alas, there is not sufficient space. My recommendation is just to head to the park, find a comfortable seat not too far from the stage and immerse yourself in this remarkable world.

On opening night, from the very beginning, the audience was caught up in and responding to the wit and the urgency of this production. In a brilliant stroke, Attaway has magically imported a key scene from “Henry IV Part 1” to serve as a kind of preface: Prince Hal (Burrell) and Falstaff (J. Barrett Cooper) playact together a stern interview that might take place between the youthfully undisciplined Hal and his stern father Henry IV. It’s a scene that begins in fun, but quickly goes sour — at least for Falstaff — and foreshadows who Hal will become and how Falstaff will wind up.

Then the opening action of the play proper finds the now-King Henry V (Burrell) asking the Archbishop of Canterbury (Gregory Maupin) whether Henry has a legal claim to throne of France. In response, Maupin answered with a perfectly deadpan lecture on history and theology so dry and tedious that on Friday night, he was only a few lines in when the audience started laughing.

From then on, as Henry would say later in the play, the game was afoot. Then the action volleys back and forth like balls across a tennis court.

> Read about the history behind William Shakespeare’s Henriad plays

In the royal court, treason is discovered, and three nobles (played by Alex Gordon, Tony Reimonenq III, Shaquille Towns) are sentenced to death.  In an Eastcheap Tavern, Falstaff’s friends recount and mourn the details of his death in a scene that — like everything related to Falstaff — is at once raunchy and inspiring, and it’s here that we see for the first time in the body of this play, Shakespeare’s superbly humanistic treatment of the underclasses, in superbly wrought performances by Kyle Ware, Jon Patrick O’Brien, Hallie Dizdarevic, Mollie Murk, Jennifer Pennington, and Gregory Sanders, all of whom work craft a wonderful ensemble.

Meanwhile, the members of the French royal court, who know of Henry V’s youthful wildness, dismiss him as a serious threat in a delicious scene played with breezy confidence by Jon Huffman as the doddering King, Dizdarevic as the imposing Queen Isabel (she also narrates the prologue and interstitial material), and Will DVary as the Dauphin (whose preoccupation with his horse is just one of the delights of this play). Other members of the French faction include Tom Luce as a voice of reason,  O’Brien and Braden McCampbell as Governor of the besieged city of Harfleur — and BeeBee Patillo in a memorable turn as the French court’s emissary to Henry.

In addition, there is a diplomatic romance at the core of this play, one that involves the King of England and Princess Katherine of France. And while war is brewing elsewhere, Katherine (Murk) gets instruction in the English vocabulary of human anatomy in what must be one funniest scenes in all of English drama, especially since her tutor, Alice, is played by the formidable Abigail Bailey Maupin. For romantic comedy, a later scene that brings Henry and his future bride together, is just about as fine.

The romance may be blissful and witty, but at heart, this is a play about war, and especially Henry’s conduct of it. Attaway’s staging of the war scenes, with thrilling work and blazing action from fight chroreographer Eric Frantz is as powerful as can be. In fact, all the technical aspects of this production are outstanding: Karl Anderson (set design); Megan Bliss (choreography; Casey Clark (lighting); Donna Lawrence-Downs (an enormous array of costume designs); Laura Ellis (sound design); Rachel K. Carter (dialect coach), and several more…

Key action here involves the siege of Harfleur, Henry’s restless decision to roam in disguise amongst his troops on the eve of Agincourt, the brutal battle itself, Henry’s steely willfulness and the extraordinary comic scenes that flow in and out throughout and feature virtuoso performances by Greg Maupin as the thickly accented Welshman Fluellen, Kyle Ware his hapless leek-eating nemesis Pistol.

But it’s Henry who matters, of course. And on that matter I will say only this: I feel reasonably sure that if during the St. Crispin’s Day speech Burrell had asked the amphitheater audience to jump up and storm the stage, a quite large contingent would have done so.

Kentucky Shakespeare’s “Henry V” plays at 8 p.m., Tuesday through Sunday, through July 18, then it runs in rotation with “Shakespeare In Love” through Aug. 1. The plays are free and take place at C. Douglas Ramey Amphitheater, Central Park, 1340 S. Fourth St. Check kyshakespeare.com for information.