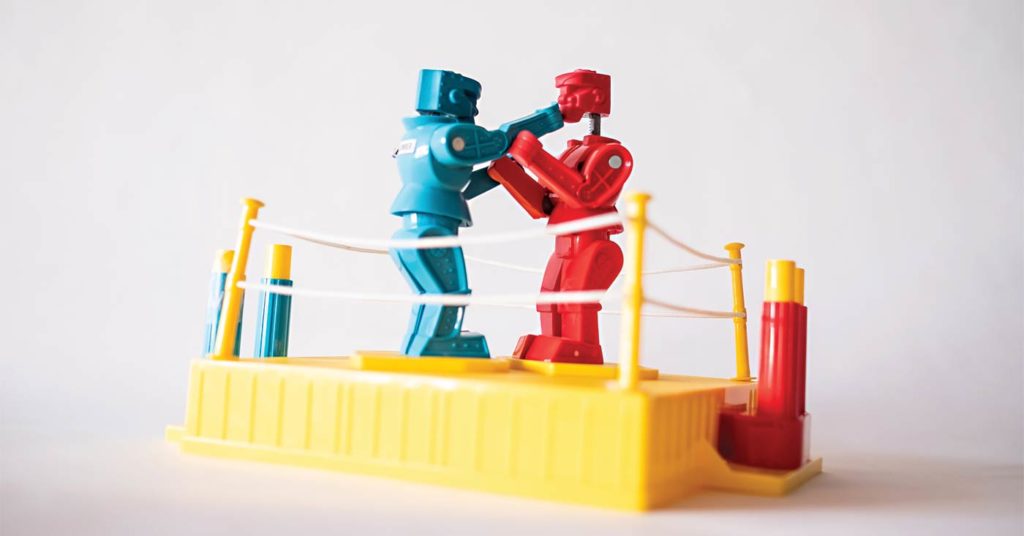 For LEO’s Labor Day Issue, two attorneys have written about how unions are pushing back against Kentucky’s anti-union right-to-work law, which you can read below. Also, a union organizer writes about the three steps unions should take to survive into the next century.

“We must guard against being fooled by false slogans, such as ‘right to work.’ It provides no ‘rights’ and no ‘work.’ Its purpose is to destroy labor unions and the freedom of collective bargaining by which unions have improved wages and working conditions of everyone. Wherever these laws have been passed, wages are lower, job opportunities are fewer and there are not civil rights.”
—Dr. Martin Luther King Jr.

Now, more than ever, remember Dr. Martin Luther King Jr.’s warning. He wrote these prescient words during a 1964 campaign by the NAACP against an Oklahoma right-to-work ballot initiative. Dr. King’s warning was followed, and the Oklahoma initiative was defeated.

Fifty years later, in Kentucky, the wise words of Dr. King were ignored.

Kentucky is now a right-to-work state, and understanding the impact that will have on our Commonwealth is important.

While the impacts of such legislation are not yet known, studies show, as Dr. King predicted, that wages will fall and union membership, trending downward, will continue to slip. This has happened in other states with right-to-work laws.

Yet not all is lost.

A case pending before the Kentucky Supreme Court could find the right-to-work law unconstitutional, on any one of several grounds, and save the Commonwealth from right-to-work.

“As soon as the Kentucky ‘Right to Work’ Act was passed, corporations and their army of attorneys began pressing what they perceived as an advantage to reduce benefits and drive down wages. Luckily, the Kentucky Constitution was written in the era of robber barons and intended to protect the populace from their insatiable greed and power. Kentucky should be the first state to defeat right-to-work with our Constitution,” said David Suetholz, an attorney for  Kentucky labor unions in the case Zuckerman et al. v. Commonwealth of Kentucky, et al.

“Unions offer the opportunity for hardworking men and women to earn higher wages and have job security by joining together to use their power in numbers to make sure companies are not taking advantage of their employees,” said Caitlin Blair, Communications Director at United Food and Commercial Workers Local 227.

If right-to-work isn’t about providing rights or work, what is it?

Some legal background is necessary to explain it.

By law, unions can represent workers at businesses and those who work for the government only when a majority of workers vote or otherwise indicate they would like a union. If a union represents only some of the employees, less than a majority, an employer has no obligation to recognize or bargain with that member-only union.

Once a majority votes in a union, the union is required to represent all workers fairly — no discrimination against nonmembers is allowed. So, unions must bargain for higher wages and better benefits for members and nonmembers alike. They must file grievances on behalf of disciplined nonmembers and ensure the safety of nonmembers as well.

In every single state, whether a right-to-work state or not, workers have the right to not join the union. No one is ever lawfully forced to join. In states that have not adopted right-to-work laws, private sector workers still must pay the union for their fair share of the cost of the collective bargaining and representation in the grievance process.

Contrary to popular belief, nonmembers’ dues are not used for activities such as lobbying or political involvement.

This year the U.S. Supreme Court overruled 40 years of precedent in Janus v. AFSCME Council 31. (For all of you RBG lovers, she joined a dissent with Justice Elena Kagan which is worth a read.) The Supreme Court decided that public sector nonmembers don’t have to pay a fair share fee at all. Nonmembers now have the option to free ride, or to pick and choose the services from the union that they want to pay for, even though the union must provide them with the same services it did before.

In right-to-work states, including Kentucky, free riding is sanctioned.

Union members in the public and private sector have to shoulder all of the costs of collective bargaining, grievance representation and safety enforcement for the nonmembers. No option for nonmembers to pay for any union services is available.

The Kentucky “Right to Work Act” was passed in January 2017 within days of a transition to a Republican-led legislature. The law prohibits employers and unions from entering into contracts requiring nonmembers to pay their fair share and imposes criminal penalties on any who so contract. Because the right-to-work law in Kentucky wasn’t put up for a popular vote, unions and working people have had to challenge the law in the courts.

The challenge to the law is now pending in front of the Kentucky Supreme Court.

The case Zuckerman et al. v. Commonwealth of Kentucky, et al. focuses on the unique protections of the Kentucky Constitution. [Ed. note: One of the authors of this article, Devon Oser, represents Kentucky labor unions on this case.]

The special legislation sections of the Kentucky Constitution were designed to prevent special privileges for those with power and wealth who can influence the legislature. At the Constitutional Convention of 1890 delegates warned against laws that benefited “the horde of railroad and other corporations” while “battening like vampires upon the substance of the people.”

The court challenge argues that the law was passed as an emergency measure when there was no documented emergency. The Kentucky Constitution provides that “no act … shall become a law until ninety days after the adjournment of the session … except in cases of emergency.” Despite this clear language, the Kentucky right-to-work law was effective immediately after passage.

The case also argues that the Kentucky Constitution provides equal protection to all workers and should not single out labor unions because they are doing the collective bidding of workers at a work site.

The case discusses how the Kentucky Constitution prohibits specialized legislation that applies to only unions and not to other organizations where members are compelled, not only to pay their fair share, but to join, such as the legal bar (Kentucky Bar Association). The Kentucky Constitution specifically provides that “the General Assembly shall not pass … special acts” that single out particular organizations for “punishment of crimes and misdemeanors or to remit fines, penalties or forfeiture.” And it further prohibits special acts that “regulate labor, trade, mining or manufacturing.”

The case also asks the logical question — why can the legislature force unions to provide a service to workers who do not pay for that service? The Kentucky Constitution, Section 13 prohibits taking property, such as a union’s resources, without consent or just compensation.

On the other side of the case, the Commonwealth argues that the right-to-work law is constitutional because it helps promote economic growth and development in our Commonwealth and also because without right-to-work workers’ rights are infringed by forcing them to pay for their union’s services. The Commonwealth also argues that asserting the need to attract new business is sufficient documentation of an emergency.  Only the Kentucky Supreme Court can make the final determination as to whether the Kentucky “Right to Work Act” is constitutional.

If the Kentucky Supreme Court holds that the right-to-work statute is unconstitutional as special legislation, a violation of equal protection, or a taking, then unions and employers in the private sector will again be able to contract for nonmembers to support the services unions provide by paying their fair share.

In the public sector, because of the ruling in Janus, unions and employers will only have the option to charge nonmembers for services provided directly to the individual nonmember, such as filing a grievance on the individual’s behalf, rather than requiring them to pay their fair share of all collective bargaining costs.

If the Court finds the law constitutional, it’s imperative that working people vote in the upcoming November election for legislators who will rescind “right-to-work.” No right to call for a ballot proposition, such as the one in Missouri in August 2018 when two-thirds of voters rejected “right to work,” or the one in Oklahoma in 1964 in which Dr. King campaigned, exists in Kentucky.

It is too early for neutral and respected studies to report the impact of the passage of right-to-work in Kentucky. Preliminary data show that the percent of Kentucky workers belonging to unions in 2017 fell to 9.6 percent from 11.1 percent in 2016.

We can expect that right-to-work will lower wages in Kentucky.

That would be borne out by many studies, which indicate that Dr. King’s warning was right — states with right-to-work have lower wages. For instance, a recent study of Indiana, Michigan and Wisconsin, by the University of Illinois School of Labor and Employment Relations, found that implementing right-to-work reduced the unionization rate by 2.1 percent and lowered hourly wages by 2.6 percent.

States looking to foster business and create jobs are better off focusing on growing local businesses than on right-to-work. While a few vocal proponents of right-to-work proclaim that a specific business or two moved to Kentucky because of the enactment of “right-to-work,” neutral experts indicate businesses prioritize many other factors, such as proximity to supply, tax breaks and an educated workforce, over whether a state has a right-to-work law. One 2011 Economic Policy Institute study found the greatest barrier to the Commonwealth attracting business was the shortage of skilled workers.

On Labor Day 2018, when unionization rates in the private sector are at an historic low of 6.5 percent, we must remember Dr. King’s wise words. Take time to reflect on those who have come before us to fight for better wages, working conditions and benefits. Labor Day should inspire us to band together and keep striving for economic justice in our Commonwealth. •

Ariana Levinson is a professor of law at the UofL Brandeis School of Law where she teaches Labor and Employment Law. Devon Oser is an associate at Branstetter, Stranch and Jennings, PLLC where she represents Kentucky labor unions. The views of the authors are their own and not those of their employers.