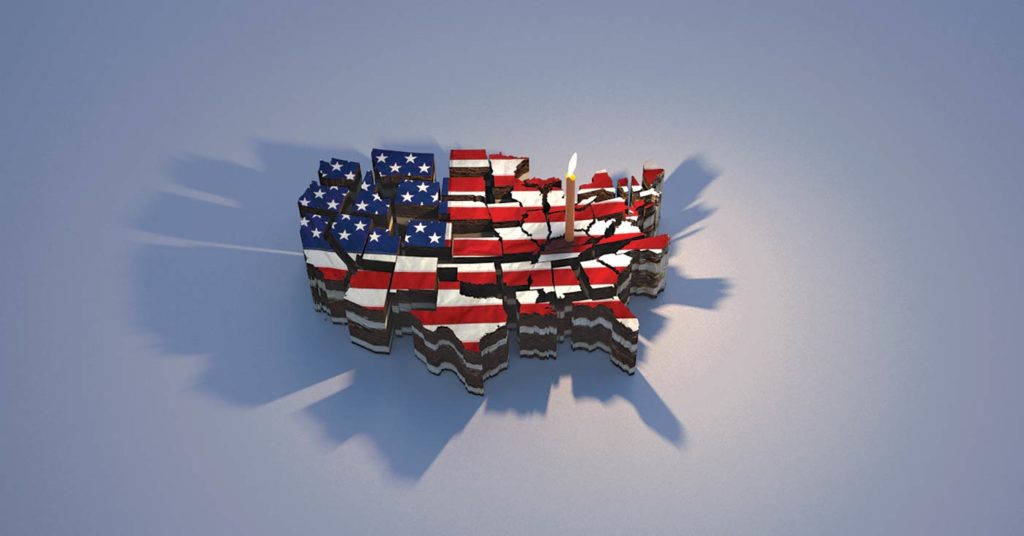 We present a trio of stories for Independence Day: below is Ricky L. Jones’ birthday letter to America, in addition to Pam Platt’s reflection on why she chose to sit for the National Anthem and Michael L. Jones’ piece on the black roots of “Happy Birthday to You.”

Happy birthday, America! What is it, 242 years for you? That ain’t bad. As countries go, you’re still pretty young, but your journey to this point has been one hell of a ride.

Let’s see — before you were even a twinkle in your parents’ eyes, they started a little thing called slavery to ensure you had a hefty trust fund, and you haven’t wasted it. You’ve been resilient and resourceful. You’ve worked your butt off to tame the land and civilize barbarians. You’ve maintained a commitment to freedom and equality (for the right people), and pulled the rest of the often-ungrateful world along with you. You have successfully confronted every internal and external threat over the years. You’ve been the bomb… and used them here and there when you had to. I know you’re appalled by some of these thin-skinned, dependent kids running around these days, because you had to handle business right out of the womb. Hell, craziness was going on before you even opened your little peepers in 1776.

Way back in 1739, before you were born, a terrorist slave named Cato led the Stono Rebellion in South Carolina. Your parents were forced to decapitate him and his accomplices to make the world safe for you. In 1800, when you were just a babe of 24, a misguided and violent slave named Gabriel conspired against you in Virginia. You showed him who was boss and killed him, too. Nut jobs kept coming, and you kept killing them. They made you grow up way too fast. You had to deal with the German Coast Uprising terrorists in Louisiana when you were 35, the Boston-based propagandist David Walker when you were 53 and the murderous Nat Turner at 55. You even had to deal with the race-traitor John Brown at 83. My God, you had to face all that madness at such a tender age. It got worse!

Some madman named Abraham Lincoln betrayed you…you had to endure a war, oppressive Constitutional amendments, and Reconstruction all before you made 100. I mean seriously, you’ve gone through it! You’ve had to fight off political, cultural and spiritual assaults at every turn. You’ve survived invaders, terrorists and enemies old and new. Now, you have to deal with hordes of Mexican rapists and murderers overrunning your borders and son-of-a-bitch black football players disrespecting you. It’s madness!

Luckily, you have another in a long line of offspring to set things right again. Donald Trump is a committed son who understands your plight. You raised him well, unlike that black sheep stepchild Barack Obama who caused incalculable damage. Lord, you wrongfully spared the rod with that one, I’ll tell you. But, hey, young parents sometimes make that mistake. Either way, you didn’t fail completely.

In all his waywardness, Obama knew nothing is more important than you, America. You remember what he said after his silly little friend, Hillary Clinton, lost to Trump? “Everybody is sad when their side loses an election, but the day after we have to remember that we’re actually all on one team. This is an intramural scrimmage. We’re not Democrats first. We’re not Republicans first. We are Americans first.” You see? I told you! Even the bad kids are still loyal to you at the end of the day.

Deep in his heart, Obama knew his misguided childishness could be repaired only with the strength, clarity and boldness of a strong, responsible son who would protect your borders, get the colored wing of the family in line, and put women back in their place as well. I mean really – who the hell do these females think they are? They’ve gotten so crazy that they actually think they should control their own bodies! Someone has to correct that foolishness.

Like all of us — you’ve had to learn, America. You’ve been a little naïve at times. You got soft and more willing to give some bad elements, like Obama, a chance. That was ill-fated, and you paid a steep price for it. Jobs, opportunities and God-given privilege were jeopardized, and something had to be done. So, you stood up and made the hard, adult decisions that were necessary. Not to worry, ol’ girl — you have a really, really good kid running the family business now. Donald Trump is steadfast, honest and true. Most importantly, other members of the family, such as Congress and the Supreme Court, support him absolutely, because they know by supporting him they support You! They’re all working to keep you great and beautiful. You must be proud!

So, once again — Happy Birthday, America! There have been some twists and turns along the way, but it’s been a wonderful life for you. Even with a few wrinkles, you look damn good for 242. Keep doing what you’ve been doing! •

Dr. Ricky L. Jones is chair of Pan-African Studies at the University of Louisville and host of the “Ricky Jones Show” on The Real 93.1 The Beat FM Louisville. Visit him at rickyljones.com and follow him on Twitter @DrRickyLJones.