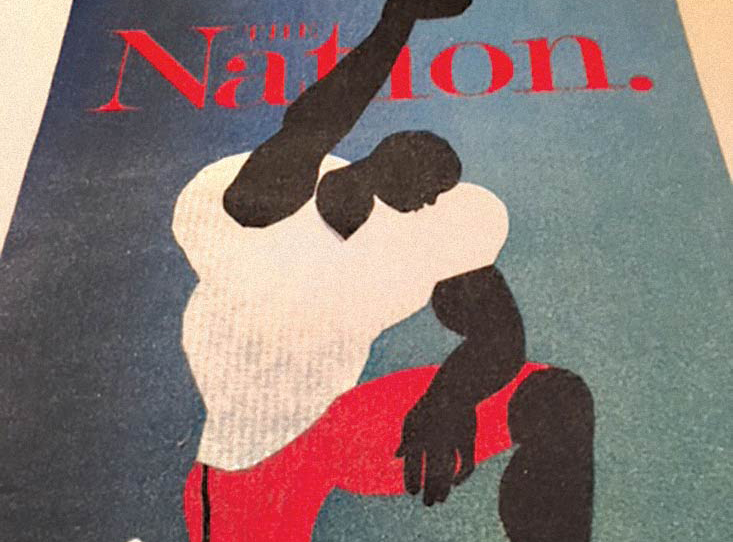 We present a trio of stories for Independence Day: below is Pam Platt’s reflection on why she chose to sit for the National Anthem, in addition to  Michael L. Jones’ piece on the black roots of “Happy Birthday to You” and Ricky L. Jones’ birthday letter to America.

My own Independence Day came early this year.

I rose just after dawn on a Saturday morning several weeks ago and got ready for my weekly trip to the farmers market. The air was warm and the dress was casual, so I opted for shorts and a T-shirt. The specific shirt was intentional: It bore a reproduced piece of art showing an African-American football player, in uniform, taking a knee and raising a fist in the air. It was Memorial Day Weekend and I thought the people we were honoring had fought for the imagined player’s right to register his opinion in the nonviolent way depicted.

I wore the shirt to the market and then to two stores before I found a small American flag we could place at my father’s grave. Dad wasn’t killed in action, but he served his country as a U.S. Air Force pilot for 20 years. He gave up a lot of time with his family, lost friends in combat and earned medals in the dangerous war he fought for one year of its extended life.

We always visit him on this weekend and leave reminders of our love and respect.

When we pulled into the cemetery, still early that morning, we noticed a series of signs that looked like arrows. They were pointing the same direction we were headed and led us not only to Dad’s grave but also to the military section of the cemetery, where waves of white headstones marking the Civil War dead blanket the gentle slope of hill below my dad’s resting place. A fleet of motorcycles was parked on the drive bisecting the slope and people in organizational T-shirts different from mine were finishing their task of placing small flags, much like mine, on the graves of fallen strangers. I walked up the hill to Dad from where they gathered and I wondered for a moment what conversation we might have had, had they noticed me, too. I wondered the same when I reached Dad.

I grew up in an age riven by wedge issues, where families split apart over things such as length of hair — only that wasn’t really about hair, was it — and where deep and enduring schisms formed over a misbegotten war, the one my father had fought. Though we’d come out the other side of them, my family hadn’t been spared from such skirmishes. But present-day events proved how wrong I was every time I thought those battles of 50 years ago were in the rearview and that that fractious, scary time was behind us, too.

As Faulkner wrote, “This past is never dead. It’s not even past.”

The evidence of that, the image on my shirt, lay against my older, beating heart. Substitute “National Anthem” for “hair” or “police brutality” for “war,” and you get this year’s model of the same battle-lines drawn again and again and again in the history of our search, our yearning, for a more perfect union.

Finally, at a time and place in my life where I can choose sides and act on that choice, I do.

I make signs, I go to rallies, I volunteer, I stuff envelopes, I send a little money.

I’m finally able to flex muscles in the body of my citizenship that I couldn’t for too long. Mostly I try to keep learning and use what I learn for the expression of my version of Americanism.

A few years ago, I made a life-changing trip to the underground railroad museum in Cincinnati. It was the first museum I had visited in which slavery and its abolition, were the focus. It shifted something foundational in me, providing a deeper understanding of the reconciliation that hasn’t yet taken place between our yesterdays and our todays and tomorrows. I think about this all the time now.

A few months ago, I attended an outdoor rally in which many speakers would orate about the quest for equality, for the acceptance of marginalized people, for the long haul left, for the more perfect union that has always been at the heart of what we say is our national goal. Toward the beginning of the event, the announcer asked us to rise for the National Anthem. Given how the song had been appropriated by demagogues in recent months, for the first time in my life I thought about whether I would stand. As I considered it, I scanned the crowd and my eyes settled on a girl of about 10. She very deliberately took a knee, her child’s straight back pronounced against the stalks of adult legs around her. This child led me to stay seated, also for the first time in my life, and I listened to the voices coming together to sing the song with a sadness that was almost an ache. I’m not sure I ever listened as closely when I stood and sang with everyone else.

At my dad’s graveside on Memorial Day weekend, deliberately wearing a shirt that showed a man of color taking a knee, I wondered what my father would think of his oldest child choosing not to stand for the National Anthem. I wondered if he would understand that I stayed seated because I love my country, or my idea of my country, and this is one way I can express my desire to see us do better and be better. I wondered if he, who taught me both love of country and to think for myself, would be disappointed in me.

There were no answers that morning.

I planted the flag in the ground at the top of his marker, making sure it stood straight, as straight as the football player’s arm, as straight as that little girl’s back, and I walked down the hill and drove home. •