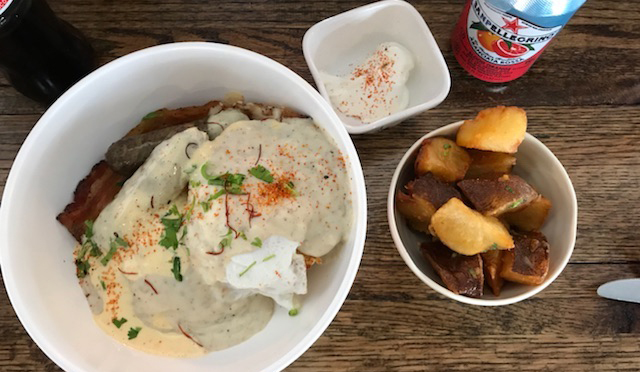 Most dining scenes worth their salt are peppered with the types of restaurants that project a well-defined concept and an easily discernible identity, yet do one curveball on their menu really well. Something that seems maybe out of place. An item you wouldn’t immediately assume to order at a place like this, because who would order tofu at a barbecue pit? But those dishes are everywhere. We call it “Found In Translation.” This is Part Two. You can read Part One here.

Where: Chicken ’n Mi
What: Ramen
Surprise Stand-Out: Biscuits and Gravy
Did you know that this Asian chicken and Ramen joint has an impressive brunch? Yeah, I didn’t either. Now, I’m not one of those white people who melt the fuck down over brunch. You know, the type of person who plans the weekend around some brunch experience where the mustached mixologist piles a fucking charcuterie board on top of a Bloody Mary, served with pancakes topped with a Nutella smiley face, despite the fact you’re in your mid-30s. I ain’t having that noise. But sometime after a night of abusing your body, which is your temple, imbibing on arsenic-rich well liquor, sometimes a bit ol’ sloppy plate of Americana is what the doctor ordered.

The new-ish Asian fusion joint Chicken ’n Mi only deviates slightly from breakfast favorites. No deconstructed plates, no overly unfamiliar takes on artery clogging cuisine. “The Cure,” named after its healing properties and not the band, whose singer has definitely enjoyed his share of brunches in his days, is a bowl of buttermilk biscuits slathered in sausage gravy and topped with fried egg (I dig an over-medium), bacon, sausage links, scallions, Calabrese potatoes and, for that ever so slight Asian flair, jeaw bong-infused hollandaise.

Also worth noting the bill reads “SOY You Later!” at the top. I love a pun, but that’s such a stretch, it causes a vein in my forehead to burst. Some men really do just want to watch the world burn.

Where: Valero
What: Gasoline
Surprise Stand-Out: Cajun chicken and sides
Like infant mortality rates and nationalized health care, other countries have convenience food figured out more than we do in the good ol’ U S of A, with some exceptions. For example, and this will sound strange, but I get very excited every time I find myself passing through New Jersey. First, it means I can tune in and listen to whatever obnoxious bullshit the world’s greatest radio station, WFMU, is spinning. And Wawa. Wawa is a mid-Atlantic chain of convenient stores, like a 7-Eleven, that has nailed the bodega sandwich. Or, sorry, hoagies, as they are known in that part of the word. Wawa hoagies fuckin’ rip.

Generally speaking though, gas station food serves as a last resort, or if you truly have stopped giving a care by pairing that 64-ounce Mountain Dew Diabetes Blast with some prepackaged cake objects slathered in a chemical-forward glaze. And then there is the Valero, a fine and impressively clean filling station near the onramp to Interstate 64 East. A filling station for your vehicle and, of course, your other vehicle — your body, which is your temple. Inside you’ll find two counters, the first to the right is where you pick up your smokes and scratch-offs. The second is Krispy Kountry Chicken. As Butchertown is under construction in perpetuity, the lunch hour sees a line stretching to the back cooler of construction dudes, so you know this is gonna be a satisfying lunch.

The lunch special offers three tendies of your choice (I like the hot), a side, a biscuit, and drink for $7. The biscuit, while the photo does not do it justice, is both sweet and buttery. Krispy Kountry has the usual homestyle sides as well as Cajun and Creole fare: red beans and rice, jambalaya, or boudin balls. The red beans and rice, also not done justice by the photo, as they’re on the bottom, are absolutely legit. Smoky and succulent, it’s an appropriate take on the storied Louisiana Monday meal, a dish so beloved that Louis Armstrong once signed his letters “red beans and ricely yours.” No, the chicken is not farm-to-table fare, but the breading packs a black pepper punch and savory chew that puts, um, a gas station a couple ticks above, say, Popeye’s — the most logical reference for this blue plate lunch. Food from a Valero should not be this good, yet here we are. Since bodega culture is (sadly) not a thing in Louisville, this is the next best thing.

Where: Frankfort Avenue Beer Depot
What: Barbecue
Surprise Stand-Out: Wontons
Folks will argue ad infinitum over barbecue: what it is, and what isn’t. Does mustard belong in sauce a la South Carolina style? Fall off the bone ribs or nah? Dry rub wings versus slathered up. But one thing everyone will agree on is that wontons are an awfully strange thing to offer at the pit. And yet FABD serves up the classic Asian-style appetizer in the form of their Hillbilly Wontons — a pocket of pulled pork with in-house slaw, peppers, onions, and a side of gyoza sauce. Its savory quality inside and crispy exterior has almost an empanada quality to it, which perhaps another BBQ spot should give the ol’ college try.

Where: Safier
What: Mediterranean and Kebab
Surprise Stand-Out: Saag
Up the street, Addis Grill combines the flavors of Africa and the Middle East, which isn’t too crazy as they share coastlines. And Greek diners that amalgam Mediterranean food with continental griddle fare has been a staple of American cuisine born from immigration. But a kebab shop with decidedly Middle Eastern fare that just so happens to, off the cuff, have an Indian special every day is perhaps a bit more rare. Most days, Safier Deli, known for its shawarma and falafel, whips up a traditional Indian dish, whether its briyani, tikka masala, or a lamb vindaloo. All are worth a try, if you don’t mind a comatose afternoon, but Safier really nails a saag paneer — ghee-rich spinach sauce with chunks of cheese over bismati rice. This spot, more known for its vertical meat tornado and healthy Greek salads, nails spicy and flavor-rich Indian fare.