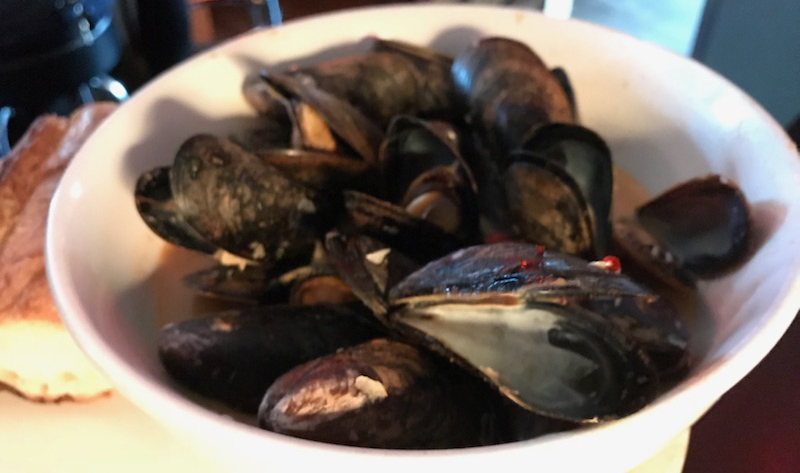 The unassuming seafood joint, with its ship wheel and decorative fishing nets dangling by the front door, that bakes an amazing chocolate cake. The bright and elegant bakery, Edison bulbs suspended from a ceiling of reclaimed wood, that slow-cooks an amazing chili. The Mexican joint, a cumin-forward fajita smell permeating the air with glowing Corona neons in the window, that serves an amazing seafood bisque apropos of nothing. Most dining scenes worth their salt are peppered with the types of restaurants that project a well-defined concept and an easily discernible identity, yet do one curveball on their menu really well. Something that seems maybe out of place. An item you wouldn’t immediately assume to order at a place like this, because who would order tofu at a barbecue pit? But those dishes are everywhere. Here are some, with more coming in Part 2 later this month. We call it “Found In Translation.”

Where: El Mundo
What: Trendy Latin fusion
Surprise Stand-Out: Steamed Mussels
Decked out in calaveras and Frida Kahlo portraits, El Mundo is a beloved purveyor of unique twists on Latin American cuisine, from overstuffed burritos and tacos, to chile rellano, tamales and a rotating cast of gazpacho. It also features one of the best seafood dish in town — its North Atlantic Steamed Mussels. It is called an appetizer on the menu, but don’t get it twisted, dummy — it’s a satisfying meal for one. A mound of clam-shelled boogers come bathed in a chipotle cream broth teeming with garlic and lime and finished with a few splashes of Mexican lager, served with a hunk of crusty Blue Dog Bakery bread to sponge up all the good bits. Save for Seafood Lady, none of the seafood joints in town can play ball with this beautiful creation in terms of flavor or value.

Where: Zanzabar
What: Music venue and arcade bar
Surprise Stand-Out: Hot Brown, Salad
The English Grill’s hot brown serves as the city’s ambassador to the signature Louisville dish, a regional twist on Welsh rarebit. And that’s perhaps fair, as it was created at and named after The Brown Hotel where The English Grill heats up its pans. But it’s not the best in town. For an exemplary hot brown, you’ll traverse from The English Grill’s posh, white tablecloth atmosphere to a vintage arcade and music venue in Schnitzelburg, where you can catch a touring punk band in the music hall, get handed down a humbling at “The Hobbit” pinball machine, and plant your big dumb face in a bubbling cauldron of mornay-soaked mana. Zanzabar’s hot brown is served in a cast iron skillet, piled high with in-house roasted turkey, thick cut bacon, tomato and all the usual fixings. It’s a $12 dish that will feed two, often is too hot to eat within the first couple minutes, and will live up to the hype of any visiting guests ready to actively abuse their arteries with this Kentucky classic. A second surprise: It also does a really killer Caesar salad to which you can add blackened chicken, and then somehow have leftovers too.

Where: Dairy Kastle
What: Summer treat stand
Surprise Stand-Out: Vegan Hot Dog
When one conjures up nostalgic memories of the summer ice cream stand — soft serve over a sugary, crunchy waffle cone and frozen bananas, or various foodstuffs oozing with that gelatinous, yellow, oil spill often labeled as nacho cheese — vegan options might not be the first thing you think about. Shit, a number of trendy, 5-dots on TripAdvisor joints in town don’t have a real vegan option that isn’t rabbit food. But this seasonal walk-up fixture on Eastern Parkway has one — a good one. Their vegan hot dogs come topped with a hearty meatless chili loaded with beans, corn, and onion, plus the optional classic mustard and pickled jalapeños that have a ballpark-forward profile. If vegetarian is more your palate, you can smother ‘em in some of that viscous, yellow cheese pool.

Where: Lydia House
What: Veg-friendly brunch and soups
Surprise Stand-Out: In-house hot sauce
It comes in a repurposed Rooster sauce bottle, labeled with an “XXX” in masking tape. It’s available only by request. It’s the Lydia House in-house hot sauce. Though known for its scrambles and vegan tacos and build-your-own noodle soups, Lydia House also has the best tasting and most nuclear hot sauce in the city, made with Carolina Reapers, scorpion peppers and whatever the hell else they can find. Two drops on your omelette, or three drops in your soup, will light it up like the Fourth of July. You’ll be tearin’ up like when Jean Valjean dies. It’s the flavor equivalency of Robert Oppenheimer’s rumination on the nuclear bomb: “Now I am become death, destroyer of worlds.” So tell ‘em you want the sauce next time, OK?

Where: Spring Street Bar and Grill
What: Old school dive with Keno
Surprise Stand-Out: Fried chicken
Of course, it isn’t unusual for a no-frills bar to do pub fare such as wings with a certain je ne sais quoi. But in this part of the country, where both the international signifier of fried chicken and a chef-driven food culture that elevates even the most rustic of dishes shall meet, it’s surprising that the best fried chicken in town isn’t from an Edward Lee property, or conversely a hard-to-find, no bullshit, line-out-the-door type of joint a la Prince’s in Nashville. No, the best wings in town come from the unassuming brick-and-neon facade that serves you a quick, pre-game drink before a concert at Headliners down the block. These lil’ guys are twice fried and come slathered in a hot and tangy Buffalo sauce that respects the palates of those who prefer a flavor that sets off alarms. You choose whatever quantity you desire, a huge value on 60-cent wing nights every Monday. This is where I send folks for good chicken. Well, this and one other place we’ll talk about in the next installment.

Where: Pokehana
What: Pacific poke bowls
Surprise Stand-Out: Tacos
An Hawaiian dish with marinated cuts of fish similar to Japanese sashimi, the new-ish Pokehana downtown puts a fast casual spin on the cuisine with a made-to-order poke bowl concept. It claims to be the city’s first poke restaurant, and to my knowledge, I have no reason to doubt that. I love poke — high in protein, low in fat, and just look at all the toppings options. But lately I find myself gravitating toward the tacos. Its steak and kimchi tacos are succulent and generous with their fragrant kimchi. Unlike Korean tacos that might spring for daikon, marinated carrots and maybe even seaweed, Pokehana plays it traditional with its toppings: onion, cilantro, and your choice of hot sauces for a salsa. As the author of not one but two in-depth taco journeys, you know I take this food seriously, and Pokehana delivers a surprisingly great taco meal for under $10.

Where: DeLat’s Gateaux and Cafe
What: Bakery and patisserie
Surprise Stand-Out: Banh Mi
Obscured from view by a tire shop driving along Iroquois’ Southside Drive, you’ll find a quaint bakery doling out fresh-from-the-oven brioche and pâtisserie classics. Though the signage’s swirly script, pink color palette and decadent menu looks French, DeLat’s is a Vietnamese bakery. Of course, French rule throughout the 19th century influenced the cuisine of Vietnam, leading to some of the most celebrated and unique culinary amalgams in the world. While Delat’s floor-to-ceiling shelves of fresh macarons, turnovers and tarts are worth a whirl, the real piece de resistance is the grab-and-go banh mi. No special orders, a super simple approach and only $4 a piece, DeLat’s wraps up authentic deli-style banh mi stacked with Vietnamese cold cuts and pate on fresh baguette. The pickled veggies come packed separately as to not sacrifice the texture of the carrots, cucumber, jalapeño and cilantro, while also avoiding what classically trained bakers refer to as the “soggy bottom” on the bread. I pick up like four of these whenever I stop in.

To read Part Two of this series, click here.