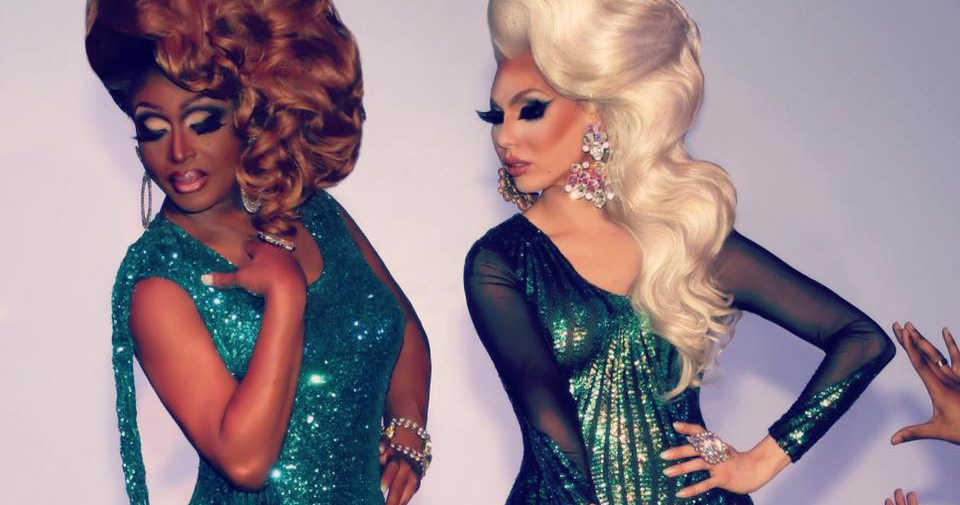 No tea, no shade and no pink lemonade, but if your only experience with drag has been watching “RuPaul’s Drag Race,” you need to treat yourself to a live show. Not that there’s anything wrong with “Drag Race” — RuPaul is a living goddess after all — but drag is best served in person. And Louisville has plenty of places to see a show, whether you’re looking for campy, pageant or genderfuck queens or even drag kings, this city has you covered. If you have other suggestions, let us know. The list is ordered first by venues with a regular rotation of shows, and secondly by places with occasional shows.

To find when these venues are hosting their next drag show, click the hyperlink in their name to see their event page on Facebook.

PLAY Louisville
1101 E. Washington St.
If you’re looking for a drag show dripping with glitz, glamour and sex appeal, PLAY is for you. The Playmates are “the art of female illusion perfected” as the bar put it, and they put on one hell of a show. Expect extravagant outfits, lip-sync performances and seductive dancing by performers Akasha O’Hara Lords, Jade Jolie (alumnus of “Drag Race”), Karmen Kazzi, Leah Halston and Shontelle Sparkles; and music provided by DJ’s Fierce Tease and SleepyT. The shows are pretty much nonstop at PLAY, with multiple shows per night, Wednesday through Sunday. Also, once a month, PLAY hosts bingo nights by the Derby City Sisters of Perpetual Indulgence, a “modern order of 21st-century nuns dedicated to community service, fundraising, outreach, advocacy, education for safer sex awareness and a ministry of presence.”

Le Femme Drag Brunch
Le Moo
2300 Lexington Road
Now not all drag happens in nightclubs, as evident by Le Femme Drag Brunch at Le Moo. These performances, which take place on Sundays, and sometimes on Saturdays, are produced and hosted by Daniel Cole, who is known for Hard Candy, a show featuring drag and LGBTQ performers from national pageants, film, television (including “Drag Race”) and web series (such as “Dragula”). So, needless to say, the quality of these shows is impeccable, with queens from all over the region serving up looks that range from old-school to modern. Also, the songs at these shows tend to be crowd favorites that are easier for everyone to sing along with. And if the brunch buffet at Le Moo is anything like its regular offerings, it’s sure to be delicious.

Purrswaytions
2235 S. Preston St.
Purrswaytions bills itself as “your one and only lesbian bar in Louisville where everyone is welcome.” While the bar is open every day but Sunday, the drag shows usually occur Fridays and Saturdays. On the second Friday of every month, Le Clique takes over the bar, which host Zsa Zsa Gabortion said is intended to be “more of an alternative drag show, meaning the performers are encouraged to choose songs that aren’t top 40 and give performances aren’t necessarily what you might expect to see … ” She said the drag aesthetic for these shows is generally about traditional female illusion and old-school glamour, but the show also “celebrates gender nonconformity, punk rock and explorations of the art form.” On the second Saturday of the month, you can find a show by The Derby City Divas, which the bar said is an “all bio-females” show. The third Saturday of the month is the Legends Show, which showcases performances by older queens and kings. And the fourth Saturday of every month is Boyzz by Knight, which is an all drag king show.

Titty Tiki Tuesdays!
The Limbo
411 W. Chestnut St.
I’m sure you read all about Louisville’s only tiki bar when LEO’s Kelsey Westbrook first introduced us to it. But what you may not have read about, is Limbo’s Titty Tiki Tuesdays. It’s a cabaret-style show every Tuesday through May, hosted by burlesque performer Ethel Loveless, and the bar says it will feature “many forms of burlesque and drag that will have different performers on stage every week!” The show’s performers are always changing, with past performers including Dolly Parts and Umi Naughty. Future performers include Stevie Dicks, Sophia Santana and Champagne.

To find out when these venues are hosting their next drag show, click the hyperlink in their name to see their event page on Facebook.

The Cure Lounge
1481 S. Shelby St.
The Cure Lounge has drag shows about once or twice a month, with the bar saying it promotes queens who “think a little outside of the box and focus more on representing themselves artistically as opposed to focusing on glitz and glamour. We love our beauty queens as much as our scary and trashy ones!” In addition to queens with more outlandish makeup and outfits than you may be used to, the music at these shows is also of a deeper cut.

Octo Claw’s Bizarre Bazaar
Various locations
Octo Claw’s Bizarre Bazaar, billed as the “grisliest, ghastliest, most glamorous show of all,” has burlesque, belly dancers, clowns, fire and flow performers, and best of all, drag queens and kings. Organizers say these shows are “more macabre, more experimental, and more strange than what people expect.” The group usually performs at The Cure Lounge, but have also had shows at Mag Bar, Galaxie, The Green Building and Kaiju.

Teddy Bears Bar
1148 Garvin Place
Teddy Bears Bar says it usually caters to gay men, but everyone is welcome. As promoters put it, “you are unlikely to sit alone at the bar without someone engaging you in a conversation.” It also hosts drag shows about once a month, with everything from “comedy queens, beauty queens and goth queens.” The bar says it works to keep things fresh with new performers, but a few regulars have earned the title “Beauties of the Bear.” Those queens include Reva Devereaux, Barbara Cuda and Monika Monáe.