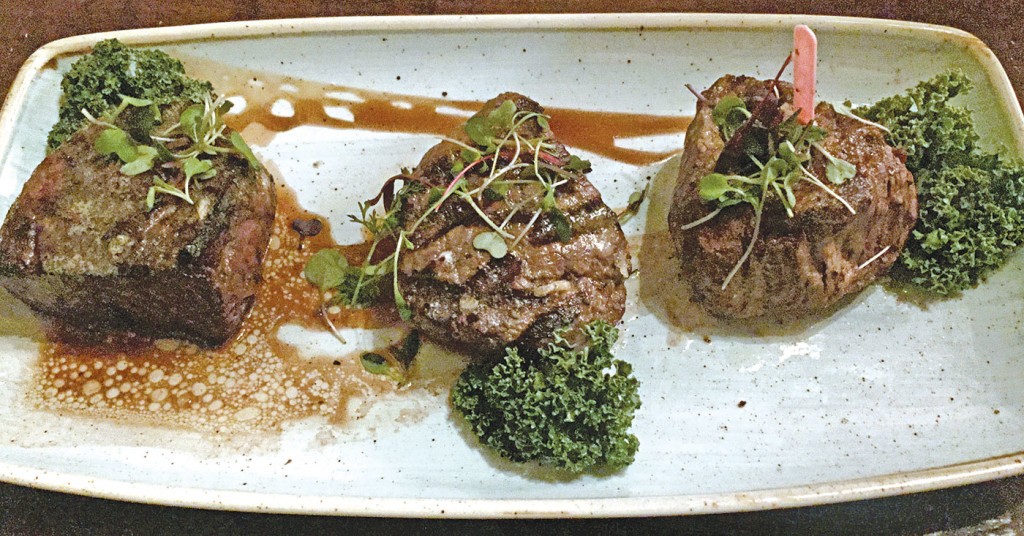 For more than 60 years, tens of thousands of Louisville folks have made it their custom to stop off at KT‘s for an adult beverage — or several — and maybe a quick bite on their way home from work.

It opened as the Old Kentucky Tavern back in the 1950s, evolved into KT‘s in 1985, and lasted another 30 years. But everything eventually changes, so wave buh-bye to KT’s and say hello to Le Moo, marketing and PR guru Kevin Grangier’s spectacular new spot, now branded as a “mid-range steakhouse and more.”

Grangier has brought his quirky, campy style to Le Moo, which bears some resemblance to his Village Anchor Pub & Roost in Anchorage, with its bordello-style rococo decor in multiple rooms that meander over several levels surrounding a large, circular bar.

A majestic stuffed longhorn head of an oversize longhorn gazes gently over one room, an artifact probably not intended to prompt pondering over the origin of our steak. Old Master-style paintings depict cattle grazing in Old English pastures. And, just because they can, one select dining booth is lined with leather taken from pre-used Louis Vuitton purses.

Prepared to go full carnivore, we brought along friends, Peggy and Susan, to help us do justice to the steak menu. We settled in to a large, semi-private table for four in a velvet-upholstered booth framed with what appeared to be old barn wood, studied the menus, and called for adult beverages.

The wine list is long, well-chosen and impressive, but an offbeat cocktail caught my eye: The Evening Joe ($10) was essentially a Manhattan with a difference, made with a shot of cold-brewed espresso, making a caffeinated grown-up delight like you’d never encounter at Starbucks.

Executive Chef Chip Lawrence’s menu is long and impressive, and even at “mid-range steakhouse” prices, expect to pay for quality. Not counting the $18 burger and fries, steaks range from $28 (for steak Diane) to $145, an investment in a 30-ounce Wagyu T-bone.

Along with a good choice of starters, soups and salads, you’ll find a half-dozen worthy fish, poultry and pork entrees from $25 (for pan-seared jumbo sea scallops) to $34 (for a prime bone-in pork chop). Don’t want meat at all? There’s a quality, chef-driven vegan white-bean cassoulet ($17). Lunch and weekend brunch menus are affordable, with most entrees priced in the teens.

We started with a basket of baguettes and dinner rolls ($8) imported from New York City’s Tribeca Bakery, with elegant Irish butter and sweet, earthy sorghum butter.

That caveman-style hunk of shank called for the vegetarian cassoulet ($17) for moral balance, but there was nothing abstemious about this black-iron skillet load of large, tender white beans, leeks and mirepoix in a lightly spicy sauce so savory that I would have sworn it was made with cheese and heavy cream if it hadn’t been labeled vegan.

Then we hunkered down and split the $96 18-ounce tenderloin flight: 6 ounces each of Michael’s Meats choice, Kentucky-grown CAB-standard Black Angus prime, and Snake River Farms Idaho-grown Wagyu tenderloin, priced to sell at $96, which makes you suck in your breath a lot less when you divide it several ways.

The steaks came out sizzling, medium-rare as ordered, and all three were extremely tender, even the mere choice grade.

Surprisingly enough, perhaps based on high expectations, everyone liked the Wagyu OK, but there were no epiphanies, no harp arpeggios or organ chords. It seemed soft; one of our party called it “mushy.” The prime cut was also so extremely tender that it seemed to lack texture. To everyone’s surprise, the mere choice-graded beef was the crowd favorite, based both on desirable texture and rich, mouth-watering beef flavor.

Grangier later disclosed in an email that he, too, is a big fan of the choice tenderloin. “If I didn‘t have the prime next to it, I personally would think it was prime,” he said. In retrospect, those in pursuit of the ultimate steak dinner might choose the 30-ounce Wagyu T-bone. I could make a case for splitting that $145 beast six ways.

A side of sautéed Peruvian gigante lima beans was outstanding; grilled asparagus was good, and sautéed mushrooms, well, so-so.

Dessert? I recommend the $10 pecan-pie cheesecake — yes, a fusion of two classics — so rich that one serving was enough to split four ways.

Final touches are still coming, Grangier says. A patio with a half-dozen beach-style striped cabanas is coming soon. Also, Blue Moo — a 1920s style jazz and blues club based on the style of Rockefeller Center’s Rainbow Room, is expected to open within Le Moo next month.