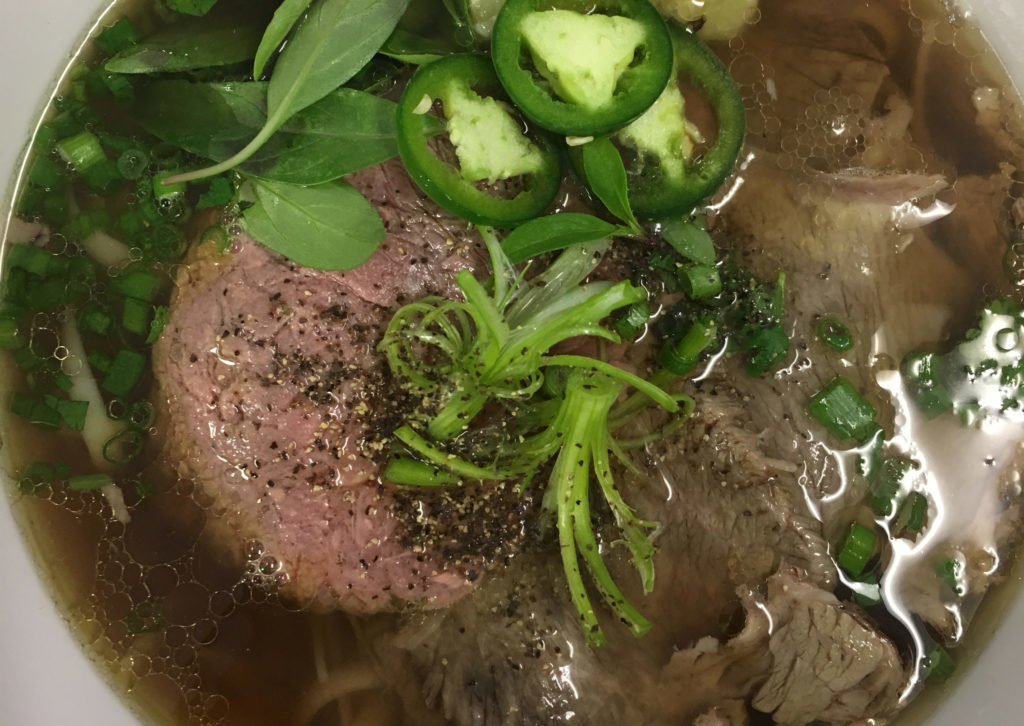 Pho, the dish that launched a thousand bad puns, is the ultimate choose-your-own-adventure comfort food. You can add as much or as little pepper heat as you want, brighten up the broth with lime or don’t, and add a lot of, or just a little, texture with crisp bean sprouts. Get it with beef, chicken or seafood. If you’re adventurous, spring for all the bits that Americans with their delicate, little, precious palates think is icky, such as tendon and tripe. Or 86 the meat altogether with a healthy pho chay. Really, if you put that big brain of yours to it, every bowl of pho can be totally different, even when ordering from the same spot.

A staple of Vietnamese cuisine, this fresh and complex noodle soup has blown up stateside in the last decade. Louisville is no exception, with three new concepts opening within a year. Pho is everywhere now, which makes sense since it’s fucking (or, sigh, pho-king if you must) great. Pho slaps, fam.

But there’s a right and wrong way to talk about pho. The wrong way would be, bless its heart, Bon Appetit’s video with Chef Tyler Akin. Hoo, boy. Asking with my best Jay Leno impersonation: Did you see this, did you hear about this? So they shot a since-removed video with this American dork from Philadelphia, with a backwards baseball cap, whitesplaining how to properly eat pho. It… was not a good look, and the magazine quickly apologized for its no good, very bad Columbus-ing. It wasn’t that his advice was wrong — you absolutely need to try the broth before air-raiding it with hoisin and Sriracha — but with a headline “This is How You SHOULD Be Eating Pho,” it was the presentation that this guy was the authority… coupled with the optics of maybe not asking an actual Vietnamese chef like Munchies did. Also, the video claimed that pho is the new ramen, but, no, it absolutely is not. Those are two separate goddamn things. Most importantly though, it’s your order of pho, as this video from comedy gourmands The Fung Bros will tell you, and the world is your oyster. Or, er, basil plant. Anyway, do what thou whilst. Trendy chefs ready for their closeup can go pound sand.

I am not Vietnamese — I’m white as our boy Tyler — and I do not claim any authority on the subject. I’m just some rube who fell off the turnip truck. But when it comes to soup, I can’t get enough of the stuff. Cold outside? Gotta have my soup. A blazin’ 95 degrees and humid? Coach, I’m ready for some soup. I break out into hives and get fidgety if I have moved through the universe too long without lapping up some of that savory good good. Come to think of it, I think I’m going to take a break from writing right now to plop my stupid face into a hot bowl — be right back.

Ah, that’s better. OK, so I’m passionate about soup, and I have the utmost admiration for pho — a broth that takes at least six hours to properly stew. I’ve made a number of other noodle soups at home, most fairly successfully. I haven’t even entertained the idea of trying pho though, because I know I am not worthy to make it. Pho is the finest soup. Pho demands respect.

And respect starts with pronouncing it fəː˧˩˧ (“phuh”) and not “foh,” as in “fuck outta here.” But that’s OK, because most Vietnamese restaurants have their dishes alphanumerically listed, so if you’re not sure about butchering the pronunciation, order that “B1” for a flavor odyssey that excites the senses and, very often, cures colds.

So let’s check out some bowls in our fair city, yeah? Save for a strictly vegetarian restaurant, all pho ranked and rated is traditional beef pho — either brisket style or rare, depending on availability. Orders of A1, A2 and A3 comin’ up! Each restaurant is ranked on a scale of one to five spoons. Part two of the PhoTastic Voyage, featuring three more orders, B1, B2 and B3, will be up on leoweekly.com, next Friday.

A1: La Que
1019 Bardstown Road
Going 10 years strong on this busy Highlands strip, La Que is a low-key staple of Southeastern Asian cuisine in Louisville, which may have served as the inaugural pho for many of the type of folks perusing LEO. The dishes they do well are consistently good (Thai curries, soups), while their weaknesses are inversely proportional (avoid the noodle stir fries). Their pho falls firmly in the former category. It’s very good. Don’t expect your wig to flip, but La Que serves traditional, reliably-tasty pho with the proper accouterments on the side — basil, spouts, peppers, sauces — over a bed of sticky rice noodles for less than $8. The serving size, which should dole out between 1.5 and 2 meals for one person, makes La Que’s pho one of the best deals in town. The flavor profile is standard, but hey, when it’s not broke, right? Also, this particular soup, as with their Tom Yum, has rid me of coughs and other assorted ailments. When asked who my primary care is whenever I’m admitted to the ER after a “hey guys, watch this” moment, I list my doctor and La Que. I like this pho very much, three soup spoons!

A2: Ngon Appetit
1991 Brownsboro Road
First, a major round of applause for Ngon Appetit going the pun route without opting for the more obvious, low hanging fruit pun route (“ngon” is similar in meaning and phonetics to the French “bon”). They deserve all the rubies. Ngon Appetit is one of the new kids on the block, opening last September alongside a class of exciting new restaurants finally populating the underserved Brownsboro Road corridor in Clifton. Like, most restaurants opening in the past couple years, it springs for the fast-casual, counter-service model. What’s different here, and a novel concept for this market, is the self-serve garnishes — the requisite basil and sprouts plus a variety of peppers and sauces. Like a compact version of a toppings bar, Ngon Appetit truly embraces pho as the choose-your-own-adventure meal. They also offer your choice of rare or cooked beef. Folks, you should always get the rare, and let the hot broth cook those thin slices for you. Because of how time and media works (without getting into the Butterfly Effect), you can’t see me doing the “chef kisses fingers” thing, but just know that I am doing the “chef kisses fingers” thing in between sentences, just thinking about that rare beef pho. With a generous helping of green onion and thinly sliced sweet white onion in the stew, Ngon Appetit’s soup is a real mean competitor — very laudible for a spot open less than six months. And as you are a student of history — ol’ smarty pants here reading the LEO — you know that Vietnam was under French rule for a long time. So this place has crepes. Get a Nutella one for dessert.

A3: Pho Ba Luu
1019 East Main Street
Also new on the scene as one of the first businesses in Butchertown’s redeveloped Butcher Block, Pho Ba Luu is another fast-casual concept that opened about a year prior to Ngon Apetit. With its modern approach, replete with clean, directional vectors, steely surfaces, a bright san serif menu and industrial chic furnishings, on first impression you might think you walked into a bizarro Chipotle. But with a bangin’ bar. The al fresco patio and specialty cocktails here are unsung features of Pho Ba Luu. This is a cool place to drink. As for the pho? It’s… well. Remember earlier about how it’s a faux pas to doctor the broth too heavily? You might have to do that here. For the palate that appreciates tamer profiles, Pho Ba Luu might be the right Vietnamese cuisine for you. But if you prefer bold flavors with lots of character and heat to spare, the pho falls flat. I quite enjoy their Bahn Mi and spring rolls, and the cocktails are not to be slept on, but the pho is as sterile as the decor. I appreciate sterility in interior design, but not noodle soup.

But wait, there’s more! Is Vietnam Kitchen still GOAT? Can Heart & Soy’s vegetarian pho punch in the same weight class? Click here to check out part two of the PhoTastic Voyage (a name we thought was our own addition to the cheesy pun game, until we found out it’s the name of an actual restaurant in San Jose)!. And for Christ’s sake, like Welp! on Facebook, there’s good #content posted daily that you simply must engage with!