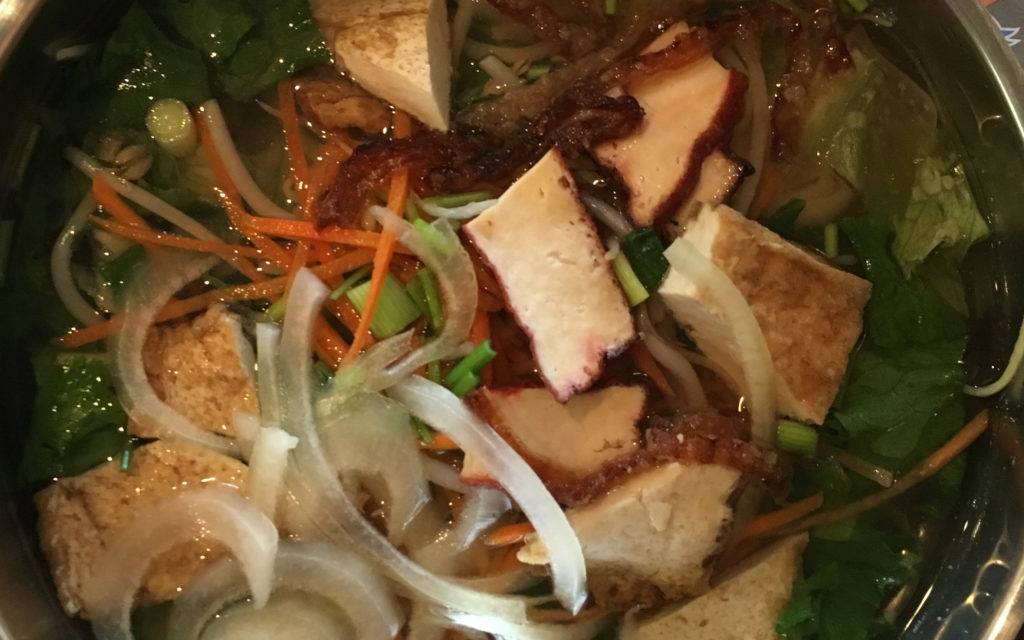 Hi! This is part two of the PhoTastic Voyage from Welp, LEO Weekly’s food feature gone gonzo. Part one has a really cool and neat introduction with robust discussion on Vietnamese cuisine and some neat links you should check out. I’m not writing another introduction, and besides, you don’t wanna miss the great analysis and reviews of the first round, do you? Of course not! So go have a look at last week’s feature if you haven’t yet, and then come back and see us here for PhoTastic Voyage II: Noodle Soup Boogaloo, which rates restaurants on a scale of one to five spoons. OK, I think that’s it for now. Bye!

B1. Vietnam Kitchen
5339 Mitscher Ave.
Behold, the gold standard. The Cadillac of international, South End, family restaurants, the blockbuster destination of the South Third Street/Iroquois dining corridor whose global storefronts represent decades of American foreign policy decisions. Vietnam Kitchen has enjoyed an earned reputation — an unassuming, no-frills strip mall cafe winner of no less than a million LEO Readers Choice awards. It’s a true melting pot of the city, where folks from all over Louisville come to eat. It was my first Vietnamese dining experience in Louisville, and I remain loyal. But now that it has competition, have things changed? Not exactly. Vietnam Kitchen’s pho is still aromatic and complex, and it has an edge over the competition in terms of variety. At VK, you can go to town on no less than seven (7!) different varieties, not including whatever secret menu In-N-Out-type shit they might have going on in the back. Someone ask and report back! While most Vietnamese spots in our community tend to keep their menu minimal, Vietnam Kitchen’s novella sprawls with pages of pancakes, crepes, stir fries, rice dishes, bubble teas and more. The pho is still very good, but the best dish is K6, their hủ tiếu cay triều châu lemongrass stir-fry, packed with a spicy peanut sauce that mainlines mana straight to the dome. La Que’s soup will cure cough and cold; Vietnam Kitchen’s K6 will clear out a sinus infection.

B2. Cafe Thuy Van
5600 National Turnpike
“Every Asian chef in the city swears by it,” read a message from a chef friend of mine. OK, that’s all I needed to hear. I hadn’t tried this spot until writing this feature because of inconsistent reviews. But upon further scrutiny, and let this be a lesson to you dear reader, the rating was unequivocally an inaccurate representation. Much of the lackluster feedback came from reviewers who seemed… how to put this… overtly Nulu-y? You know? Like men who tuck their shirt into shorts or women who say “awesomesauce” unironically. I ain’t tryin’ to hear from y’all. The positive feedback, conversely, tends to come from folks writing lengthy reviews replete with deep understanding of the cuisine. I corrected this mistake and give Cafe Thuy Van a visit.

A common feature in a lots of new trendy restaurants is the exposed kitchen, eliminating the separation between the artist and the art. Cafe Thuy Van takes this one step further by having you walk through the kitchen to go to the restroom. The space is adorned with long fluorescent backlit paintings of Vietnam’s lush landscapes, set in a nondescript strip flanked by warehouses and a Dongar gas station. All of that, I think, rules. But it’s not a place to come for ambiance. It’s a place to come for real pho, and it is incredible. Wow. Back to the cardinal rule of broth doctoring, if we use that as a metric for how scrumptious a soup is — that is, how much hoisin, sriracha, etcetera, makes it in the bowl — Cafe Thuy Van wins by default. Their soup is perfect straight out of the kitchen. I added maybe half a dollop of sambal oelek because I’ve singed my tastebuds over the years, but that was it. I appreciated the thinner approach to all the ingredients as well — the noodles resembled more of a vermicelli cut than long flat noodles, while the onions and jalapeños were sliced with thin precision. This is a bowl constructed with care.

The menu is light — banh mi, banh xeo, some vermicelli dishes — so this is your destination when you’re craving remarkable pho. I’ve not been to Vietnam, but a number of folks who have all say their offerings are legitimate. It’s also cash only, and if you live in the urban core, it’s also a bit of a hike. Buy the ticket and take the ride — just don’t forget to hit up the ATM on the journey. You won’t regret it.

B3. Heart and Soy
1216 Bardstown Road
There’s much to heart about this vegan, fast casual from restaurant veteran CoCo Tran — from its in-house tofu to Heart and Soy’s unbelievably scrumptious dessert case. And my fiancé claims the flavor of the Diet Coke from its self-serve fountain possesses a certain je ne sais quoi. I believe all the food and drink writers at LEO, and other #loumedia love this place, myself included. Because Heart and Soy’s core concept revolves around healthy eating, it resists throwing a lot of random shit in their dishes — a laudable approach. As such, Heart and Soy’s pho is very different from many other pho. In fact, it’s quite similar in character to their version of bun bo hue — the “Hue Spicy Noodle” dish that made last year’s best 10 Under $10 feature — save for a couple of swapped ingredients. This version of pho is light, satisfying, and doesn’t make you feel like a slovenly, human garbage disposal after eating it. It’s also, again, markedly divergent, due in no small part to the reliance of meat in pho’s flavor. Enterprising chefs both professional and amateur can successfully recreate meat-forward favorites with soy, analogues, tofu, beans, etc. But, of course, the very foundation of pho is, you know, simmering animal bones in broth for hours — a tough, maybe impossible order to faithfully mimic on the vegan front. Still, Heart and Soy’s tofu noodle soup is an intriguing spin on the dish, and it’s absolutely worth trying. Just don’t walk in expecting the traditional flavor profile of pho. It’s the pho, a savory tofu noodle soup filling and delicious — appropriate for carnivores, vegans, and everyone in between.

B4. Pho Cafe
1704 Bardstown Road
Occupying the storefront that previously held two shitty chain sandwich shops (Penn Station and Tom + Chee… oh, don’t pretend Tom + Chee’s $8 grilled cheeses were good), Pho Cafe is, to my knowledge, the newest kid on the block, and it checks a lot of boxes. The menu features a cross-catalog selection of Vietnamese favorites, the interior is clean and cozy, and if you live in the urban core and might not feel like hoofin’ it outside the Watterson for an authentic, therapeutic bowl of noodles, Pho Cafe offers a very fine solution. The menu features four varieties of pho, which might cause some confusion between “brisket” and just “beef.” The brisket refers to the fully cooked slices, while “beef” is the rare version that cooks in the broth. I got the latter because I’m not a dingus, and it really flipped my wig. I was honestly surprised: the clean aesthetic, a new spot in the Highlands — a neighborhood that, if we’re being honest, has produced a lot of culinary bullshit lately. I did not expect this pho stand out from the pack, but it did in a big way. Not too salty, a little bit of silk-like fattiness to the broth, thinly sliced accouterments, and a generous helping of rare beef on the top. This bowl, in my view, was as good as Vietnam Kitchen. And if you live in the Highlands/Germantown area, that should be some welcome news. I plan to return after I get my sodium levels down from this noddle soup journey.

So there you have it, folks. And to condense both parts, here’s the didn’t-read-all-of-it version re: the pho geography of Louisville: