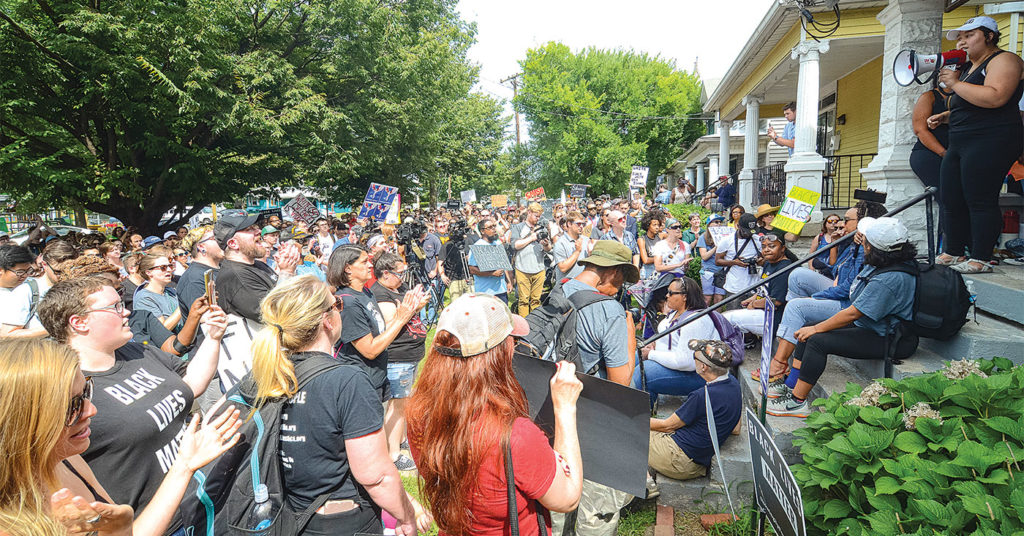 [This article is part of a package covering Louisville’s reaction to Charlottesville. Check out the other pieces, including Chanelle Helm’s “White People, Here Are 10 Requests From Black Lives Matter” and Erica Rucker’s “America… where are you going?”]

Some time ago, I shared a stage with my good friend and law professor Dr. Jeremy Levitt in Arizona. We discussed what black communities needed to do as we moved forward in an increasingly hostile America. Jeremy was adamant that black people (including children) were more psychologically and physically at risk than many realized or wanted to admit. He was firm in his belief that every adult black man and woman should legally arm themselves, be trained in the use of weaponry and train their children as soon as they came of age. It was a jarring stance, and I disagreed with him. I made the more socially acceptable argument that we needed fewer guns in America, not more.

The latest illustration of how virulent, dangerous and deep-seated racism is in this country happened recently in Charlottesville, Virginia, as white supremacist terrorists descended upon the city to halt the removal of a statue of Confederate traitor Robert E. Lee. We have seen this before. From Louisville to New Orleans to Charlottesville, the arguments against moving all these monuments are the same and, as I wrote elsewhere over a year ago, all of them are lies: “The vitriol expressed by neo-Confederate statue supporters, memorial defenders, flag flyers and their ilk makes one thing perfectly clear — this struggle is not about those statues, symbols or historical accuracy. It is really about white supremacy and the fierce commitment to maintaining social, political, rhetorical and visual reminders that black people have been, are and will always be, inferior in their eyes.”

Charlottesville once again brought these sentiments to the fore. The picture was stark and shaking (for some). Throngs of white supremacists marched through the streets of the city waving Nazi, Confederate, and American flags — armed to the teeth. Clubs, shields, pistols and semi-automatic weapons were on full display. Local police admitted they were totally unprepared for the presence of such an arsenal.

The white terrorists were not bluffing or shy. They were perfectly willing to not only shout epithets, but to push, punch and beat their adversaries. At the end of the day, three people were dead: two law enforcement officers were killed in a helicopter crash and a young woman, Heather Heyer, was killed by James Alex Fields Jr., a white supremacist who plowed his car into a crowd of counter-protesters. More were injured. Even though national media has reported that Fields is from Ohio, he has lived there for only a year or so. Fields is actually from Florence, Kentucky. Another feather in the cap of the fabulously-progressive Bluegrass State.

To be frank, Charlottesville is just a story for national and local networks. They will move on from it in a few days. Contrarily, it is life for black people. We continuously face the onslaught of police brutality and exoneration of officers who have killed black men, women and children. We are chided about voting but have precious few candidates, Democrat or Republican, who are committed to our needs. We must survive whites electing retrograde politicians with destructive ideologies on race. And America justifies it all. All of it and more!

We have come to a tipping point. It reminds me of Frantz Fanon and his painful evolution during the French-Algerian War. Fanon delivered a powerful exploration of the damage done by racism and colonial oppression when he wrote “Black Skin, White Masks” in 1952. Even though he understood how devastating these realities were, he still had faith in the potency of reason. By the time Fanon’s classic “The Wretched of the Earth” was published in 1961, his idea that rationally palavering with oppressive forces was possible had been shattered. By then he asserted that the Algerians had no choice but to meet violence with violence if the French colonialists persisted. It should be noted, the Algerians won.

I am aware that there are those who will quickly say advising black people to arm themselves is wrongheaded. They will not strongly condemn white aggression, but will say I am racist, hateful and promoting violence. They will say I should remember Martin Luther King Jr., never abandon nonviolence, and turn the other cheek. They will say love always “trumps” hate. I say to them, I am not promoting violence. I am not racist. I am not fomenting hate. Even if I were, white America does not have the moral authority to reprimand me.

Here’s what I am. I am a black man. I have a black child. Many Americans are showing us daily that they care more about dogs than they do about black people. Jeremy Levitt was right. From federal to local levels, American governmental structures have shown nothing to make a reasonable black person believe they are committed to defending us and keeping our brothers, women and children safe and alive. In fact, the opposite is true and it is getting worse. Say what you will, that’s the naked truth. We must be serious about protecting them ourselves.

So, yes — it has come to this. Every black man and woman should arm themselves now for self-defense! The last time I checked, the Second Amendment applies to us too and I’m sure the NRA will vigorously support our efforts.•

Dr. Ricky L. Jones is Chair of Pan-African Studies at the University of Louisville and host of “The Ricky Jones Show” on 93.1 The Beat FM Louisville. Visit him at www.rickyljones.com.