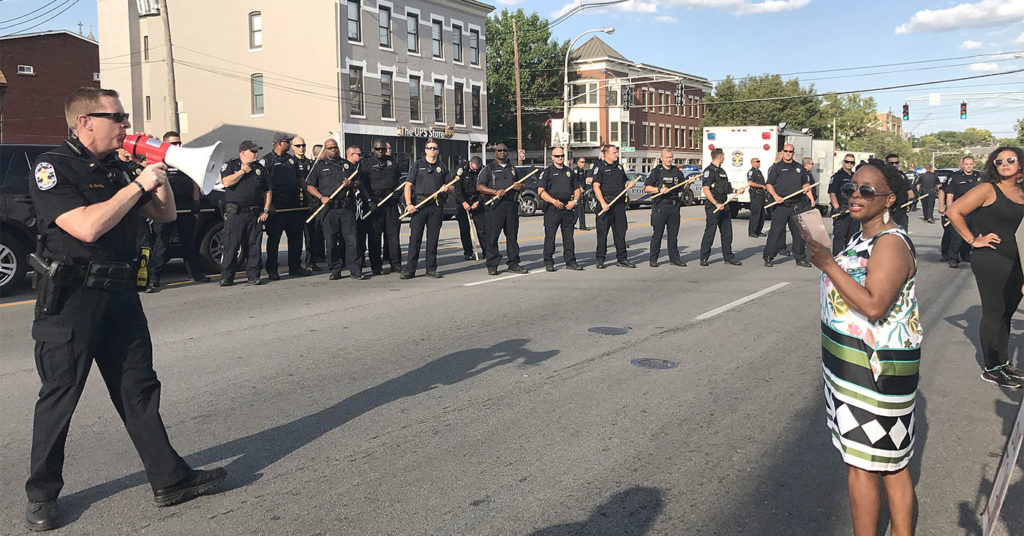 Protesters who marched from 32nd Street to The Highlands were met with baton-wielding police Sunday. The march ended peacefully and with no arrests.Photo by Kelsey Westbrook

[This article is part of a package covering Louisville’s reaction to Charlottesville. Check out the other pieces, including Ricky Jones’ column “Black People Should Arm Themselves Now!” and Chanelle Helm’s “White People, Here Are 10 Requests From Black Lives Matter.”]

I’ve come to look for America…

This country… this idea… this fledgling and hopeful experiment. What is wrong with you, America?

On Sunday, hundreds in Louisville gathered to ask the same question.

We gathered in West Louisville on the front lawn of the Carl Braden Center, named for Louisville’s iconic civil rights leader who with his wife, Anne Braden, endured violence to fight racism. The rally, led by members of Black Lives Matter Louisville, drew a tapestry of people, highlighting the city’s color and economic diversity. Joining Black Lives Matter were members of Mijente, Industrial Workers of the World, Anti-Racist Action and Peacekeepers.

We brought signs and chants and hopes and anger and frustration. We brought stories of how our struggle for equity is shared, each understanding that the greatest responsibility to destroy the cancer of racism and white supremacy in this country belongs to white people.

Standing on the porch and using a bullhorn, Mikal Forbush, formerly with the UofL’s Muhammad Ali Institute for Peace and Justice, asked the crowd how many had been to the Braden Center before. A mix of cheers, and some groans, answered back.

He, then, pointed the finger back at the metaphorical city.

America, this hurt is yours

We know that our country is sick and we are long overdue for a lot of uncomfortable family dinners and direct confrontations to fight injustice when we see it.

I can’t claim that I am overdue to fight anything because, as a black woman, I’ve been made to fight for 44 years. I fight injustice because injustice has always fought against me.

Dealing with racists and racist micro-aggressions is commonplace; but for my white friends, their world is tilting. Some of them are shocked at the violence, yet adamantly refusing to believe that racism and hatred is really this bad. Some feel that if we turn away, it might just disappear. Turning away landed us right here.

As much as it hurts people that I consider true friends, I am glad the pain is not just my own, or that of black and brown people anymore. I’m sorry, white America, but this hurt is yours, more than it ever should have been mine. If you’re white and finally upset, you can raise your fists in anger at the relatives that dumped this burning heap into your lap. Turn your anger toward the ones who left this legacy to you.

The summer humidity was forgiving so long as the sun would disappear; but the crush of bodies and the sun sneaking out between the clouds too often, left us sweaty and tossing back water. Several groups brought free water to share. Sweat bees and leaf hoppers buzzed and jumped on anyone in or near the grassy areas. At one point someone disturbed a nest of the hoppers and for a few seconds the crowd was dancing to swat them away.

Signs thrust into the sky by the crowd asked for the end of white silence, calling those who remain silent complicit and sharing feelings about the white nationalists —“Fuck Nazis,” was on the lips and signs of several crowd members.

The rallies and vigils in Louisville came in response to the violent white nationalist protests in Charlottesville, Virginia. The events there were the direct result of racist sentiments that have become ordinary from the White House to the white family dinner table. Racists feel cozy and the nuanced polite racism—the kind Forbush sees in Louisville—is being exposed.

One after another, speakers took the porch of the Braden Center to exhort the crowd and put a voice to what had happened. They included clergy, civil rights attorney turned congressional candidate Dan Canon and well-known members of BLM Louisville, Jaison Ashley Gardner and Chanelle Helm.

Some called for love and peace, while others called for directly challenging racism.

BLM member Shalonté Branham, a sociology and political science major at Bellarmine University, led the crowd with a clamorous chant of “Black Lives Matter,” loud enough to leave my ears ringing. If you didn’t believe that black lives mattered before you showed up, you got the message then.

She told the audience that it is important to embrace, but not to forget to resist.

White America’s resistance and, sometimes, all out refusal to stand toe-to-toe with its own injustices is the fuse by which these events continue to be ignited.

In Charlottesville, America’s cauldron of racial hatred and brazen white supremacy boiled over and ended with the death of a young white woman, Heather Heyer.

They gathered on Friday night with Tiki torches and Polo shirts, bold and unmasked. The next day, they paraded in homemade duct-taped riot gear, looking more like RenFair LARPers and cosplayers than the jingoistic terrorists they are. They walked in goose step, raising their hands in Nazi salutes and dreaming of a nation where the most mediocre and awful have the power to…

Wait, that’s America now. So why are they marching?

These angry young men — and the women who support them — feel that America was intended to be a white paradise and they are being left behind. They see the world changing, browning and they’ve been misled to believe that, truly, America is theirs—land and all.

Reality has a way of dropping truth like a load of rock on exposed toes. The truth is, these folks aren’t ready for the America of the future because no one prepared them for it and they are terrified.

The safe, white and wholly imaginary world of “Ozzie and Harriet” is slipping through their fingers. They are off-kilter, irrational and violently angry. Their fear of losing power to brown and black people — or becoming them — is palpable, fearing retribution perhaps more than being powerless.

When your people have spent centuries subjugating others and taking their property, it’s tough to accept that there are many more of “them” than you and history leans toward justice. You realize your power is finite, and your diseased thinking is near an end.

Before her death, Heyer had posted on Facebook: “If you’re not outraged, you’re not paying attention.”

It is that message that black and brown activists have been trying to impart to white America for many years and, now, a dead, white woman who understood that sentiment and showed up; white people are angry. Any system built to work against any one of us, is a system that will turn on all of us but here we are.

On Sunday, it was clear from the complexion of the crowd and the signs they carried that white people were beginning to pay attention.

“White folks — This is our mess and it’s killing people,” read one sign.“Why does equal coexistence scare you?” asked another.

Sassa Rivera from Mijente led the crowd in chants and then began to describe her reaction to the violence in Virginia.

“Yesterday morning I woke up, and I was angry. I was in tears. You know why? ‘Cause people are still shocked that this is happening. You want to know why it is happening? Go to your cousins. Go to your banker. Go to your schools. Guess what? There are Nazis there. Nazis are in your neighborhood. They are watching  your children and you work with them. The only way they are going to stop is if you push back.”

“I’m tired of being numb from seeing black and brown faces with names and dates of their deaths. I’m tired of waking up and going on social media and seeing videos of people being run down. When will that be finally over? That’s why you’re here, is it not? White supremacy kills us all.”

As the group left the rally and began to march down Broadway, the police presence swelled.

“Police have always patrolled us during demonstrations,” Branham said. “The idea of black people or a group being led by a black organization motivates police to want to contain us — even when we are peaceful.”

The group neared the point of Broadway where West Louisville becomes Smoketown and Paristown, the juncture between the West and The Highlands. Officers had blocked the streets with cars and their bodies. They shouted at the crowd to move, forcing them to the sidewalk. A line of officers held batons in a display of intimidation.

The marchers clapped back.

Eventually, they reached their destination at the Mid-City Mall, peacefully and with no arrests.

But the police presence, particularly how officers wielded batons, etched deeper for many marchers how much work is left to do.

“Someone asked, ‘Why are you doing this?’” said state Rep. Attica Scott, the first African-American woman elected to the state legislature in 20 years. “There was no reason to go to this historically violent and intimidating way of addressing peaceful protesters.”

The police later would insist the batons were to be used as barricades, to keep the marchers off of Broadway and on the sidewalks. And Mayor Greg Fischer, whose go-to slogan has been “compassionate city,” issued a statement acknowledging that “the batons prompted feelings of fear and mistrust among many of the marchers, their families and friends, as well as some who saw the images later. That’s a reality we cannot ignore.” He said he has asked the police chief to review how marches are handled.

Scott is not moved by their remarks and excuses. And then a Shively police officer posted a meme on Facebook mocking Heyer’s death. He has since been placed on administrative leave.

“It’s been a weekend where everyday things change — to have LMPD come out with that lame statement this morning,” Scott said. “And in the same breath, you have the Shively police officer posting memes about the car that killed Heyer in Charlottesville.”

If anything came from the weekend, perhaps it was a greater appreciation for the power of the crowd. Sister Judy Morris, a Dominican Sister of Peace, had been to such rallies before, and she said this one may signal a deeper change is possible. “I find this crowd encouraging. Very encouraging,” she said, scanning the faces around her.