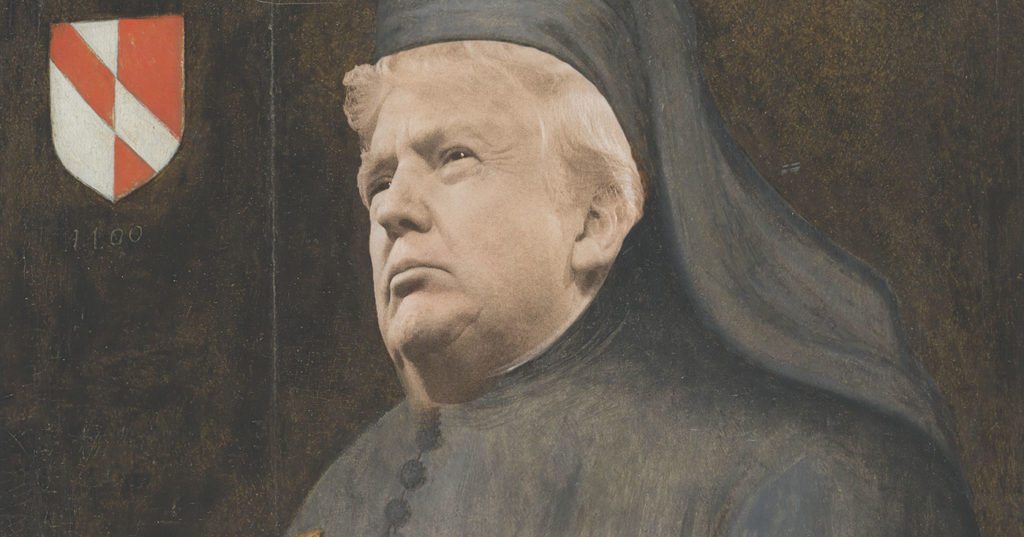 This story originally appeared as part of the cover story for our Convention Issue. We also ran an analysis of the parallels between Hillary Clinton and Lady Macbeth.

As a professor of medieval literature, I’m often asked when the Middle Ages finally ended. My standard response is to drop my jaw, raise my eyebrows and cry out in horror, “You mean they’re over?!” This always provokes laughter — everyone likes an out-of-touch medievalist — but it’s really meant only half-humorously. Although the Middle Ages may have receded into the distant past, the age of Beowulf and King Arthur still offers a useful lens through which to view the modern world.

The 2016 presidential election is a case in point.

As I watched Donald Trump’s inexorable march towards the Republican nomination, my mind drifted back 600 years to another journey, one no less surprising than that of the Manhattan-billionaire-cum-TV-personality who seized control of the party of Lincoln. Composed in the final decades of the 14th century, Geoffrey Chaucer’s “Canterbury Tales” recounts a pilgrimage to the shrine of St. Thomas Becket at Canterbury by a group of individuals who, in their diversity, represent the full range of medieval English society. Within this group is a Pardoner, a seller of fake relics and forged papal bulls, whose similarities to the presumptive Republican nominee should force us to ask whether the Middle Ages ended after all.

Chaucer uses the grasping, deceitful Pardoner as a stand-in for the corrupt medieval Church. With a falsetto voice and an inability to grow facial hair, his dubious masculinity reflects his equally-dubious morality. Nonetheless, despite his appearance, the Pardoner is a dynamic preacher and compelling storyteller, whose stirring (if hypocritical) cry that “greed is the root of all evil” casts a spell over his audience, not to mention the reader. By the end of his performance, though he has confessed his hypocrisy and admitted his lies, his fellow pilgrims still line up to purchase his bogus wares. For Chaucer, this cleric selling false salvation, while pocketing the profits, perfectly embodies a system corrupted by greed, hypocrisy and bad faith. Not surprisingly, the Pardoner remains among the most popular of the Canterbury pilgrims.

Certain similarities between Chaucer’s Pardoner and the presumptive Republican nominee leap to mind immediately. The crooked real-estate developer and owner of Trump University has made a career selling a rhinestone-studded version of the American Dream no less false than were the relics purveyed by the Pardoner. Likewise, when Trump blithely labels Mexicans rapists, or threatens to halt Muslim immigration, he makes explicit the racist subtexts underlying earlier Republican rhetoric; in much the same way, the Pardoner’s open admission that his flock is nothing more to him than a source of income makes explicit the Church’s hypocrisy in assigning a price to salvation. Indeed, even the allusions to Trump’s “small hands” and penchant for overcompensation hearken back to the ambiguous masculinity so central to the Pardoner’s characterization.

Yet for all these similarities, there’s one that resonates even more deeply. For Chaucer, the pathos at the center of the Pardoner’s character lies in his recognition that, although he is a hypocrite, the members of his audience aren’t. The sincerity of their faith means that his preaching can lead them to heaven, independent of his intentions. At the same time, he has so convinced himself of his own hypocrisy that he cannot bring himself to perform the penance that would allow him to join them in salvation. It’s not their redemption he doesn’t believe in; it’s his own. The Pardoner thus becomes a figure for the greatest of sins, despair — the belief that one’s own wretchedness is greater even than the infinite love of God, that one’s own sinfulness exceeds even the Divine capacity to forgive.

I don’t pretend to know whether Donald Trump experiences existential angst to the same degree as the Pardoner, if at all. (I doubt it.) Nevertheless, just as the Pardoner exemplified Chaucer’s despair in a corrupt Church, so Trump has come to embody a modern form of despair, not in religion, but in contemporary representative democracy. Much of Trump’s support stems from the belief that modern American society has somehow failed. “We don’t win anymore,” as the candidate himself likes to say. For Trump and his followers, the causes of this failure lie in the corruption of traditional “American” values by liberals, immigrants, non-whites, non-Christians, non-heterosexuals and anyone else who embraces a worldview antithetical to their nostalgia for a more static, less-diverse nation. The Pardoner elevates his own sinfulness above the grace of God; Trump raises his own sense of grievance over the promise of an inclusive society. If we must “build a wall,” it can only be because we have despaired of, “Give me your tired, your poor, your huddled masses.”

But there is one crucial difference between Donald Trump and the Pardoner: The Pardoner serves as the representative of a debased ecclesiastical hierarchy, while Trump has become the presumptive nominee of a major political party by the will of the voters. The Pardoner’s audience can achieve salvation, despite his bad faith, because they have no share in his hypocrisy. Trump, on the other hand, rose to celebrity in the 1980s and has remained famous ever since because of his ability to attract an audience — and not just a conservative one. Over the past 30 years, we have tolerated, and even encouraged, Trump’s behavior: We have bought his books, watched his television shows, gambled at his casinos, golfed on his greens and eaten his steaks. The Pardoner is a creature of the Church; Trump is on us.

Chaucer concludes the The Canterbury Tales just outside the walls of Canterbury. The pilgrims never complete their pilgrimage, because the penance necessary for salvation must be undertaken in person. It cannot be accomplished vicariously, certainly not by a group of fictional characters. As Chaucer knows, literature can guide us, but we must make the pilgrimage ourselves, just as we must enter the voting booth ourselves. I don’t know what will be running through my mind when my turn to vote comes, but I have a sneaking suspicion that I’ll be thinking of Chaucer. •

Rabin is a professor of English at the UofL, where he specializes in medieval literature and law.