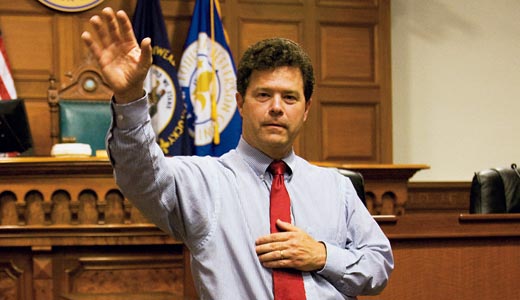 The worst thing about going to see a “Metro 26” show has to be the seating. It’s limited, uncomfortable and noisy. The old wood-and-steel chairs squeak and creak at the slightest movement. Unfortunately, the dreariness of the venue gets in the way of the comedic tragedy of political theater that has been promoted to the 700,000-plus Louisville Metro audience as “government.”

Though light on talent, it’s a regular showing of wacky and eccentric performers who showcase the manic, the optimistic, the moronic, the ambitious and the gullible — qualities sprawled all across that Metro map. On a good night, the 26-member troupe can improve a life or two without much controversy. But the cast has been prone to drawn-out dialogues that last for hours.

If you’ve never seen “Metro 26,” you should. The broadcast version does not do it justice. The key performers are well worth the free admission. Chief among them is Jim King, who masterfully portrays a mob-boss-meets-business-tycoon, a big-city politician in Mayberry whose caricature you cannot ignore. The best quality about King is that he doesn’t hide the arm-twisting, making him a uniquely bold character from which the audience cannot detach its gaze. He can go in any direction at any time.

Where the East End banker’s rumbles lack subtlety and are too soap operatic, the grace and ease of David Tandy might suit the show’s grandmother demographic. The youngest troupe member relies on being the fan favorite. It gets him recognition and cool points, but you have to wonder where such a nice character can grow in such a cruel story. I wanted to see Tandy tested by some sort of character conflict, but for now, the smile will do — even if the mouth hasn’t said much.

“Metro 26” shines in its plainly visible contrasts. Tom Owen plays up the role of the thoughtful city oracle. Compare that with Judy Green, who often appears to blurt out amateurish comments for comic relief. Hal Heiner’s surgical incisiveness can be deadly commentary during the show, but it’s loved because it comes with a friendly farmer’s disposition, which cannot be said for the abominable Doug Hawkins, who — though diminished in the current season — is bound to return to the play’s forefront as the bombastic fear-monger carrying blunt instruments. He is who we love to hate.

The problem with this show is simple. “Metro 26” is redundant. Few new players and even fewer new ideas join unless a cast member dies or drops out from fatigue. Newbie Brent Ackerson brings an Opie Taylor optimism at its do-gooder best, which has been refreshing for the show, even if it is a bit nauseating to longtime fans and players.

The audience’s laidback attitude doesn’t help either. If they demand more, the better performers would straighten up and the lesser ones would be forced out. One day, perhaps, “Metro 26” could be a sweeping, talent-filled political performance, instead of this tragedy of missteps, bloopers, wild characters and mayoral backwash.