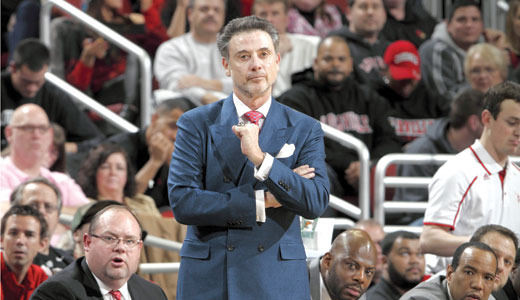 Former U of L coach Rick Pitino during a game in 2014.Courtesy of UofL Athletics.

Rick Pitino has been cleared, but he may never know closure.

The Hall of Fame basketball coach told NCAA investigators former University of Louisville assistant Kenny Johnson had “ruined my life,” caused his family “humiliation” and cost him $38 million in future salary through Johnson’s alleged duplicity in U of L’s fateful recruitment of Brian Bowen.

“(Johnson) may be on record, but I don’t believe a word that that man says,” Pitino said in a 2021 NCAA interview at his current post at Iona University. “. . .He would look me square in the eye when I said to him, ‘Is there anything wrong with any of this?’ and he said ‘Coach, there’s nothing wrong with this.’ He looked me square in the eye. So he’s a — in my estimation, you can take all the things that you have written down by Kenny Johnson and just throw that away.”

More than a year before an Independent Accountability Resolution Process panel concluded in November 2022 that Pitino had committed no NCAA violations in the recruitment of Bowen and, indeed, had “promoted an atmosphere of compliance” at U of L, Pitino blamed his 2017 firing on the Adidas-backed bribery scheme behind Bowen’s recruitment, the political intrigue of former Kentucky Gov. Matt Bevin and former U of L trustee John Schnatter and the lies, omissions and infractions of some of his subordinates, primarily Johnson.

Johnson, now an assistant coach at the University of Rhode Island, declined to respond to Pitino’s statements.

The Pitino transcript, and those of Johnson, Chris Mack and others interviewed during the NCAA’s lengthy investigation, were obtained following an 11-month court battle with the Courier Journal over U of L withholding documents the newspaper deemed to be public record. Though Jefferson Circuit Court Judge Susan Schultz Gibson found in favor of the CJ last May, the documents were not made available until after she ruled on U of L’s appeal on Nov. 17, two weeks after the IARP case closed.

Former U of L assistant coach Jordan Fair — whose failure to report attending a meeting in which impermissible payments were discussed resulted in one of the school’s Level I infractions — told investigators he sometimes had nightmares from which he’d awaken wondering, “How did I get from being a 26-year-old assistant coach to a fricking insurance agent?”

Though Pitino was willing to vouch for Johnson when he was hired by La Salle in 2018 — “he’s innocent,” Pitino said by text message — and described his former associate head coach as “a good person” whom he wished well after the show-cause penalty was announced, he had called him a “pathological liar” in his interview with investigators, said he intended to never speak to him again and that, “I don’t think Kenny Johnson gives a shit what he did to me and my family.”

Asked if he stood by those statements in a series of questions e-mailed on Sunday, Pitino said his comments were in response “to all the things” NCAA associate director of enforcement Nate Leffler told him Johnson had done.

“We move on,” Pitino said, “and I (have) forgiven Jordan Fair because he asked for that.”

Johnson has denied making the $1,300 payment Brian Bowen Sr. testified he received in August, 2017, and the IARP panel concluded it lacked “sufficient basis or credible information” to substantiate the elder Bowen’s claim. Still, the coach’s credibility was repeatedly called into question during the NCAA investigation.

Pitino says Johnson lied to him about alerting U of L’s compliance office to the red flag represented by Bowen’s parents’ move to the Galt House.

Fair, recounting a meeting as the Bowen scandal broke, said Johnson acted as if “he really didn’t know what was going on. . .like he was trying to manipulate Pitino’s thoughts, like he was trying to get ahead of it . . .and make himself seem like he’s not as guilty as he may have been at that moment.”

External investigator Matthew Dolan, listening to Johnson’s account of his order to remove the name of wanna-be agent Christian Dawkins from all records of Bowen’s official visit, expressed his incredulity by telling the coach, “I’m going to be honest with you. It doesn’t really make sense to me.”

“I understand anybody who is looking for something to sound negative, how they can — if they’re viewing it and they’re searching for the negativity in what was being said in the black and white words, I can understand your point,” Johnson said. He claimed Bowen’s family had asked him to delete Dawkins’ name from the itinerary, that his text messages to then-director of basketball operations Michael Bowden reflected their “joking relationship,” and failed to remember or explain that he had instructed Bowden to remove Dawkins’ name from all records of the visit.

Pitino told investigators he was unaware Dawkins’ name had been deleted from the compliance paperwork and failed to catch the discrepancy.

“I don’t remember specifically what was said or what the understanding was,” Johnson said. “We’re talking three-and-a-half years ago. But I assure you, I did not follow back up with (Bowden) to make sure that he removed (Dawkins’ name) — I may have made — I made one statement to him and that was it.”

Johnson is serving a two-year “show-cause” penalty that restricts his recruiting for providing false and misleading information to investigators about a recruiting contact – a Level I NCAA infraction — but he has kept his job at Rhode Island despite a clause in his contract that calls for automatic and immediate termination in the event of a show-cause penalty from any prior employment.

“Legal counsel for the University reviewed his contract and determined the language in it was interpretive,” URI spokesman Shane Donaldson said. “The school had the choice on what action to take, based on the limited show cause ruling by the NCAA. Through discussion between legal counsel and the Director of Athletics (Thorr Bjorn), the decision was made to retain Coach Johnson. The University is pleased with his work and stands by him.”

Johnson had previously been dismissed as an assistant coach at La Salle University after being implicated in the NCAA’s 2020 Notice of Allegations to U of L. That Rhode Island has not taken a similarly hard line is most easily attributed to Johnson’s reputation as one of college basketball’s better recruiters, and the high regard in which he is held by URI head coach Archie Miller.

Though Fair says Johnson was consumed with getting credit for his contributions, it remains unclear how much of a part he played in Pitino’s downfall at U of L. Wheels had been in motion for months, albeit slowly.

Five months before the U.S. Attorney for the Southern District of New York revealed the irregularities behind Bowen’s recruitment, “Papa” John Schnatter expressed ominous concerns about the direction of the athletic department during a board of trustees meeting. Governor Matt Bevin had replaced a board friendly to Pitino and former athletic director Tom Jurich with another chaired by the stern David Grissom and populated by several members seen as more loyal to the University of Kentucky.

With U of L already serving NCAA probation as a result of the strippers in the dorm scandal, the Bowen revelations emboldened Grissom to act on convictions he had held since Pitino’s restaurant liaison with Karen Sypher led to extortion and public embarrassment eight years earlier.

“Let’s start with Coach Pitino fornicating on the table,” Grissom testified during a 2019 deposition. “In my world, that would have been reason to have him dismissed the next morning. That wasn’t done.”

According to Pitino’s account, his firing was all but preordained before the Bowen news broke.

Pitino said knowing his job was on the line made him more vigilant and “paranoid” about potential violations, to the extent “I basically threatened my assistant coaches” at every meeting. Five years later, the IARP panel rejected the NCAA enforcement staff’s allegation that Pitino had failed to promote an atmosphere of compliance within the U of L basketball program.

This was, in retrospect, a fairly hollow victory. Whatever good it did for Rick Pitino’s reputation, it could not restore all he had lost at Louisville. The day after the Bowen news broke, he was done.

“All of this has taken a toll way beyond the (vacated 2013) championship,” Pitino told investigators. “Being let go, to people you love like Andre McGee and the disappointment, to the trust you had in your assistant coaches and to the hurt that it’s put to your family. But the good thing is, I became the national coach of Greece, almost made the Olympics, upset the Turks which for the Greeks was great. And ended up at a small Catholic school, which is awesome. So it’s a good ending, but a terrible four years.”