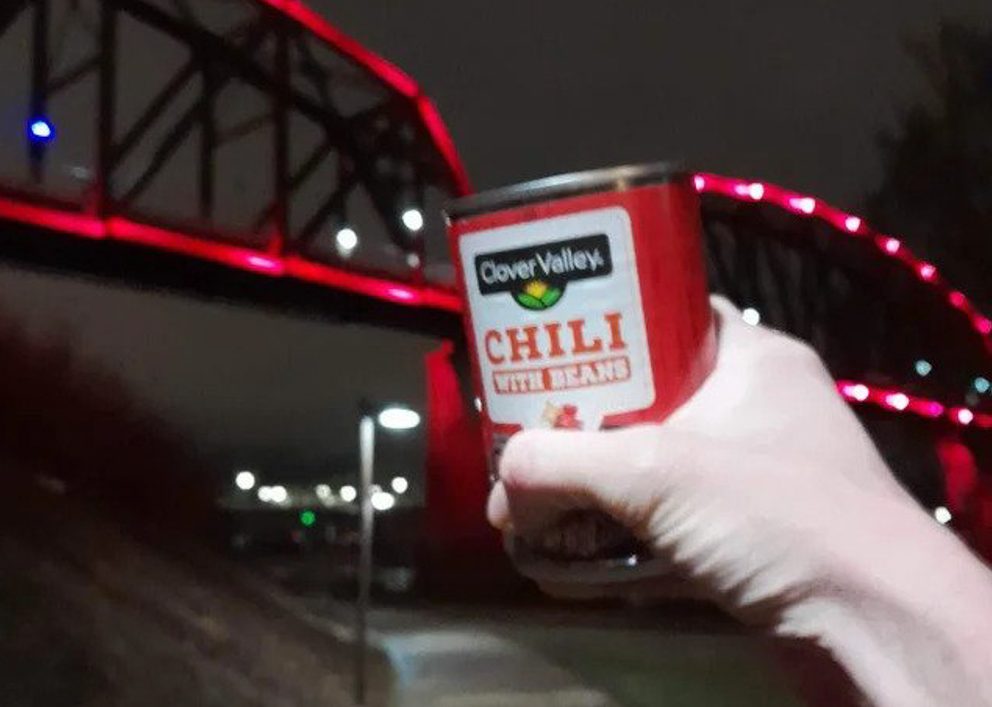 On the morning of Thursday, Dec. 29, Redditor Delicious-Dog-6109 made a post on the Louisville subreddit, r/Louisville, that read:

“Is anyone interested in meeting up at the walking bridge and eating some beans with me? Bean club meets at 7pm I’ll try and bring enough beans to share. Bean there or Bean square!”

Speaking with LEO via Zoom on Tuesday, Jan. 3, the organizer — who asked to be identified only as “Adam” — said that he showed up on Dec. 29 with several cans of beans, which he left on the bridge for passersby to take. Only one other person, a well-dressed man, showed up to the meetup, though the two only spoke briefly.

“He was like, ‘I can’t believe you’re actually doing this!’” Adam said.

But the interest Adam’s post had gotten on Reddit inspired him to keep “Bean Club” going. On Friday, Dec. 30, Adam made a second post, which has since garnered even more responses from the community. “Bean Club” is arguably now an r/Louisville meme in its own right; community posts about it include a Hunter S. Thompson parody, a “Forrest Gump”-inspired meme, pet posts, and, of course, plenty of comments expressing interest in attending the next meetup.

(Still, one Redditor made a post to point out that users can filter out the word “bean” from their Reddit feeds; another user asked if the meetup might be “just a liiiiiitle racist,” though he later said that he’d been trolling.)

Adam told LEO that being bored at work inspired him to make the original post. “I was just trying to make myself laugh at first. Like, ‘Oh, I’m gonna make a bean post in the Reddit, and I’m gonna have a good chuckle, and I’m getting through work, getting through these next four hours,’” he said. Plus, he said, “I was trying to find something to do on Thursdays instead of drink.”

Why beans specifically? They have a certain silliness, Adam said, but they can also provide “gastro-diplomacy”: “Every culture uses beans in a dish.”

He preferred the relative anonymity of a Reddit post to asking friends on Facebook in part because he figured Reddit was less serious and would make it easier to meet new people. Plus, he added, “I’ve noticed a lot of different division just in America alone, and I thought, ‘Well, maybe some lighthearted humor would start bringing us together a little bit.’” (Even so, he jokingly added the “Politics” flair to his original post. The explanation: “We’ll shit talk Indiana.”)

Adam laid out a few rules for the meetup in his second Reddit post: “1. Absolutely no littering or throwing anything in the river. 2. Objects full of beans are welcome although no flesh lights [sic] because there’s children on that bridge. 3. Bring any kind of beans you want.” (The rule about fleshlights is a reference to another recent meme on the Louisville subreddit, but the first rule isn’t a joke: one of Adam’s hopes for future Bean Club events is that the sense of togetherness they create will inspire people to keep their communities clean.)

Despite the interest, Adam doesn’t know what kind of turnout to plan for.

“I’m expecting two people,” he said. “I don’t want to say there’s gonna be thousands of people and be crushed that no one actually showed up. But then again, I didn’t expect this to be anything. I didn’t expect to be talking to a reporter.”

Still, he’ll be there at the next Bean Club meetup this Thursday, Jan. 5, at 7 p.m., for about 30 minutes to an hour at the top of the ramp on the Louisville side of the Big Four Bridge. The event will be more of a social gathering than a potluck per se, but guests should bring their beans of choice, canned or otherwise.

If it goes well, Adam plans to keep hosting it on the first Thursday each month, weather permitting. If not, perhaps, it just wasn’t meant to bean.

If you’re interested, the club now has its own subreddit, and Redditors in other cities like New Orleans and Cincinnati are thinking about starting bean clubs of their own.